My neighbor to the north – the one with a mansion lording over the rest of the hood from the highest point around – hosts equestrian events on weekends. Whether reining or cutting competitions, or “quaint” social gatherings, his barn and surrounds burst with dozens of horses and riders just about every Saturday. His property is large enough we’re pretty far removed from the hubbub, except the convoy of horse trailers and trucks barreling down the street beforehand. The wheels rumbling over the washboardy dirt road and balloons of dust floating high overhead are hard to ignore.

Maybe you don’t have a parade of horse trailers in your neighborhood (or a washboardy road), but guess what?  You do have a procession of vehicles making their way to your driveway, and the list of participants is growing.  Home delivery is the latest block party where everybody seems to have an invite.

In the 1970’s the only vehicles coming up our driveway were the red, white, and blue jeeps of the United States Post Office (USPS) or the brown, boxy trucks of the United Parcel Service (UPS).  Then Federal Express vans (FedEx) joined in with a little purple and green, while DHL (the initials of the three founders’ last names) added a healthy dollop of yellow.  Taste the rainbow!

That’s a pretty good line-up right there, but in the last decade or so home delivery (or “last mile delivery”, to use the trendier term) picked up several more players.  Amazon (black vans with a blue “swoosh” on the side) and WalMart (several colors) extended their supply chain by adding home delivery trucks.  Your pizza guy has been joined by restaurant delivery of all kinds, like DoorDash, Grubhub, and UberEats.  AmazonFresh is competing with your local grocery store to make sure you consider home delivery of products from Whole Foods.

Here are a few of the more “colorful” entries coming soon to a driveway near you:

As we speak, many of these deliverers are hopping the fence into each other’s domains.  Postmates is test-marketing convenience store items in New York City, sourcing from 150+ Walgreens and Duane Reades.  Doordash is trying out same-day grocery delivery in 22 states.  AmazonFresh distinguishes itself as food delivery with its lime-green (not black) vans. 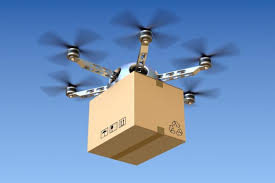 With so many entrants in the home delivery circus, it’s fair to say the concept is still in its infancy.  We’ll need several years to see who and what will ultimately come out in the wash (clearly, not Washio).  But mark my words, you can always count on someone to rain on the parade.  Amazon is already experimenting with “Prime Air”, a drone-service.  In other words, home delivery may be a little less grounded in the future.

Some content sourced from the 10/2/19 Wall Street Journal article, “Postmates, DoorDash Want to Deliver Your Groceries, Too”.

Restaurants tend to leave advertising freebies at the host stand or on your table to remember them by. After paying the bill, you might grab a logo’d toothpick or a couple of plastic-wrapped mints on the way out the door. The fancier establishments offer books of matches (as if smoking remains the chic habit it once was). But every now and then I come across my favorite restaurant takeaway: the plain and simple postcard.

I’m almost afraid to ask a young person what he/she thinks of a postcard.  They’d turn it over and over in their hands and wonder what purpose is served by a laminated photo on card-stock paper (“Just show me the photo on your phone!“)  Then they’d flip the card to the back and realize it has something to do with snail mail (“Just send me a text!“)  Finally, they’d wonder why anyone would go to the trouble of pen/paper just to let another someone know where they were having dinner (“Just add your location on Facebook!“)

Remove smartphone technology and postcards suddenly seem relevant again.  Take a break from the dinner conversation, scribble a few sentences, add a mailing address, affix a stamp, and voila!  A thoughtful bit of correspondence in mere minutes – the precursor to the Post-It Note.  If you’re lucky, the restaurant pays the postage and mails the card.  If you’re even luckier, your recipient still checks their physical mailbox.

Postcards have more history than a modest rectangle of heavy paper would suggest.  The very first postcard was sent in 1840, in London. (Someone who believed “very first” paid $40,000 for it in 2002.)  In the later 1840’s, postcards began circulating in the United States, as printed advertising.  Soon after, postcards became the Mini Cooper of personal correspondence; a quick letter sans envelope, but without images (because your personal note went on the front of the card back then).  By the 1870’s, manufacturers were producing “picture postcards”, with the divided back you see today.

The advent of the picture postcard led to a little controversy in certain parts of the globe.  Images sent from one country were not always deemed “proper” in another (i.e. sexual references in popular UK “seaside postcards”, or images of full or partial nudity from classical statuary or paintings).  Accordingly, some countries refused to handle picture postcards.  Those same images are clearly conservative by today’s standards.

Like baseball cards, postcards have become a collector’s item.  The value of a given card is associated with the image on the front.  Online resources include collector websites and clubs, catalogs, and trading platforms.  When I was a kid in the 1970’s, I collected postcards – one summer – to document the stopping points on a month-long trip my family took to the American states in the northeast.  Pretty sure none of my cards held value, but I still wish I kept them.

Postcards have their own terminology, as if to elevate their status among mailed items.  A large letter postcard shows the name of a place in big letters (instead of a picture).  An early postcard is any card issued before the era of divided backs.  An installment card is one of a set, forming a single picture when placed in a grid.  Postcardese is the short-sentence, abbreviated writing style of postcards.  Finally, midget postcards – noticeably smaller than the standard 6″ x 4.5″ version – were issued as souvenirs and bound in sets.  (If you look at my collection photo you’ll see several midgets).

The next time you come across a postcard, give the little guy a (first-class) ounce of respect.  He’s been around a long time, and the post office – depending on country – may still send him for less than the cost of an enveloped letter.  Remember, the postcard was the original format of brief long-distance correspondence.  Think about that the next time you text.

Why does Amazon ask for “packaging feedback”?  Do they really want my opinion on a plain brown box?  Yesterday I came home to an Amazon delivery on my front door step.  But that’s already not true.  The box was dropped into a plastic bag and suspended from my mailbox (“front door step” just sounded better).  My packaging feedback to Amazon: lackluster.

Let’s chat about delivery as it used to be.  My fondest childhood memories include the noisy, colorful, “old-fashioned” delivery trucks that made their way into the neighborhood regularly.  No kid from that era will ever forget the bakery, dairy, and ice cream trucks, and the allure of fresh-made bread and other goodies – temptations limited only by Mom’s permission or the amount of change in your pants pocket.

Growing up in Los Angeles, the Helms Bakery had a fleet of hundreds of bright yellow delivery trucks.  The drivers dressed in smart uniforms and used a distinctive “toot-toot” horn to announce their arrival.  The neighborhood gathering at the truck was as much social as it was for baked goods.  At the end of grade-school field trips through the Helms factory, each kid received a coupon for something free from the delivery truck.  It was like a golden ticket to a candy store, where you walk in and the owner spreads his arms and says “pick one”.

The dairy truck came from Edgemar Farms, not that we ever knew (or cared) where the farm was.  Edgemar delivered milk in glass bottles with foil caps.  The “milkman” would walk into the kitchen like he was family.  He’d take the order from Mom and return with his wire basket full of milk, eggs, and butter.  Then he’d unload everything right into the refrigerator, tip his cap with a cheery “good morning” and be on his way.  Now that’s anything but lackluster delivery.

Ice cream (Good Humor or some other brand) appeared in our neighborhood on summer nights – the very best truck of them all.  I can still hear the beckoning jingle from the roof-mounted loudspeakers.  The neighborhood kids would flock – I mean flock – to the truck’s side window, where the all-in-white ice-cream man would lean out and wait too patiently while we made up our minds.  Bomb pops.  Push-ups.  Ice cream sandwiches.  Heaven on earth delivered right into your hands.

Okay – end of time-gone-by chat – back to today’s delivery by Amazon.  Boring brown box.  Got it?  So how did my box get to me?  What did the truck look like (was it even a truck)?  Did the delivery person wear a uniform? Did he or she come to the front door?

Lack of delivery details equals lackluster delivery.  And it’s only going to get worse.  Amazon Prime Air is described as “a future delivery system designed to safely get packages to customers in 30 minutes or less using small unmanned aerial vehicles”.  So now my brown boxes are going to arrive by parachute.  In my packaging feedback, I’m going to request a beckoning jingle from the drones to announce their arrival – er, landing?