Restaurants tend to leave advertising freebies at the host stand or on your table to remember them by. After paying the bill, you might grab a logo’d toothpick or a couple of plastic-wrapped mints on the way out the door. The fancier establishments offer books of matches (as if smoking remains the chic habit it once was). But every now and then I come across my favorite restaurant takeaway: the plain and simple postcard. 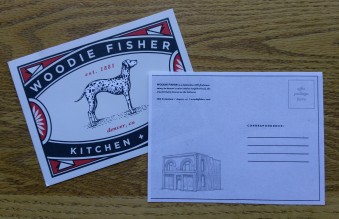 I’m almost afraid to ask a young person what he/she thinks of a postcard.  They’d turn it over and over in their hands and wonder what purpose is served by a laminated photo on card-stock paper (“Just show me the photo on your phone!“)  Then they’d flip the card to the back and realize it has something to do with snail mail (“Just send me a text!“)  Finally, they’d wonder why anyone would go to the trouble of pen/paper just to let another someone know where they were having dinner (“Just add your location on Facebook!“)

Remove smartphone technology and postcards suddenly seem relevant again.  Take a break from the dinner conversation, scribble a few sentences, add a mailing address, affix a stamp, and voila!  A thoughtful bit of correspondence in mere minutes – the precursor to the Post-It Note.  If you’re lucky, the restaurant pays the postage and mails the card.  If you’re even luckier, your recipient still checks their physical mailbox.

Postcards have more history than a modest rectangle of heavy paper would suggest.  The very first postcard was sent in 1840, in London. (Someone who believed “very first” paid $40,000 for it in 2002.)  In the later 1840’s, postcards began circulating in the United States, as printed advertising.  Soon after, postcards became the Mini Cooper of personal correspondence; a quick letter sans envelope, but without images (because your personal note went on the front of the card back then).  By the 1870’s, manufacturers were producing “picture postcards”, with the divided back you see today.

The advent of the picture postcard led to a little controversy in certain parts of the globe.  Images sent from one country were not always deemed “proper” in another (i.e. sexual references in popular UK “seaside postcards”, or images of full or partial nudity from classical statuary or paintings).  Accordingly, some countries refused to handle picture postcards.  Those same images are clearly conservative by today’s standards.

Like baseball cards, postcards have become a collector’s item.  The value of a given card is associated with the image on the front.  Online resources include collector websites and clubs, catalogs, and trading platforms.  When I was a kid in the 1970’s, I collected postcards – one summer – to document the stopping points on a month-long trip my family took to the American states in the northeast.  Pretty sure none of my cards held value, but I still wish I kept them.

Postcards have their own terminology, as if to elevate their status among mailed items.  A large letter postcard shows the name of a place in big letters (instead of a picture).  An early postcard is any card issued before the era of divided backs.  An installment card is one of a set, forming a single picture when placed in a grid.  Postcardese is the short-sentence, abbreviated writing style of postcards.  Finally, midget postcards – noticeably smaller than the standard 6″ x 4.5″ version – were issued as souvenirs and bound in sets.  (If you look at my collection photo you’ll see several midgets).

The next time you come across a postcard, give the little guy a (first-class) ounce of respect.  He’s been around a long time, and the post office – depending on country – may still send him for less than the cost of an enveloped letter.  Remember, the postcard was the original format of brief long-distance correspondence.  Think about that the next time you text.

One thought on “Past Cards”