Every now and then I take this blogging habit out onto the road, so to speak.  Instead of typing paragraphs from the home office, I’ll liberate my laptop from its cables, hop in the car, and head over to the local coffee house.  Working in a caffeinated environment – especially one buzzing with grouplets of chatty patrons – brings out the creative juices in me (if not the ability to concentrate).  Lately however, I’ve decided my little laptop show pales in comparison to some of the real road warriors out there.  Apparently, I need to show up with more toys in hand.  It’s time to go “Venti” instead of “Tall” and become one of the true coffee-breakers. 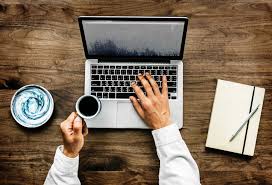 Perhaps you’re familiar with the patron I’m talking about here.  Coffee-breakers recreate their home office (or “office office”) on a table in the middle of Starbucks.  They consume more than their fair share of coffee house real estate (but not their fair share of coffee relative to their extended stay).  They arrange face-to-face meetings with colleagues, and interviews with prospective employees.  They hold Bluetooth conversations as they stare at nothing in particular.  Or FaceTime conversations as they have one-on-one’s with their phones.

I’ve come across several breakers in my coffee house stays.  They demonstrate distinct behaviors to separate themselves from those of us who simply want laptop time with our lattes.  First, breakers set up their workspaces, with enough time and attention to detail to announce, “Notice me!”  Then they go to the counter to place their coffee orders, deliberately leaving their setups unattended (as if to say, “This space is reserved!”).  Finally, they begin their “work”, which doesn’t really seem like work.  I can’t help thinking coffee-breakers are more often show than substance.

A few weeks ago at the local Starbucks, I left my laptop and Flat White to take a quick phone call outside the store doors (the polite thing to do).  When I returned, I found I’d been joined by a coffee-breaker.  She was carefully positioning two Bluetooth speakers on the table in front of her; then fiddling with her phone and a few other components from her oversized backpack.  As soon as her speakers gushed music (clashing with the Starbucks music playing overhead), she put in her AirPods and simultaneously took a phone call.  She operated as if she was in her own little world (i.e. I didn’t exist).  Therein lies another distinct coffee-breaker behavior: virtual walls.

On another visit, I was party to a conversation between a commercial real estate broker and a prospective tenant.  He sat his client (deliberately) adjacent to the counter queue, which (conveniently) put him in the center of the store.  The broker was hawking lease space in the adjacent soon-to-be-opened retail center.  No wonder he raised his voice as he spoke.  This coffee-breaker’s sales pitch was as much for me and my fellow patrons as for the captive soul sitting right in front of him.

The Wall Street Journal (WSJ) recently published a dozen rules for coffee-breakers; rules that should be laminated to every Starbucks building in the land.  Examples: Work only where and when you’re wanted (i.e. ask first).  Buy first, sit second.  Buy more than one small black coffee during the day.  Don’t take work calls – ever.  And so on.  Perhaps more enlightening was the reader comments in response to the rules.  I perused four pages’ worth (30+ comments) and not one came to the defense of coffee-breakers.  In fact, several comments added more rules to the list.

To my earlier comment about going “Venti”, I talk – of course – tongue-in-cheek.  A little attention is a good thing, but my hope is most of us would not deliberately choose to be a coffee-breaker (else this is the end of Western civilization as we know it).  Nope, I think I’ll take my road show to the library instead.

Some content sourced from the 8/27/19 Wall Street Journal article, “How to Act Like a Human When Working From a Coffee Shop”.