One of my favorite musicals is “Brigadoon”.  The original production dates a long way back; to 1947.  Brigadoon tells the tale of two Americans traveling in the Scottish Highlands.  A town quietly appears to them through the fog: charming, simple and untouched by time.  It is idyllic.  To protect itself from the changing outside world, “Brigadoon” only appears to outsiders one day every hundred years.  So when one of these travelers falls in love with a Scottish lass from the town, he only has a few hours to decide if that love means remaining in Brigadoon and disappearing into the fog forever.  The ending is fitting (and not so predictable).  I won’t give it away here. 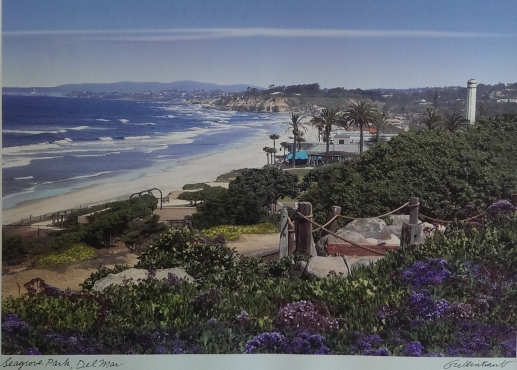 My own Brigadoon appears to me, once a year for only a week or two.  Just north of San Diego lies the little coastal town of Del Mar.  It is a quiet village by the sea, with pretty little shops and restaurants, a prominent hotel, and a train that whistles its way along the nearby cliffs several times a day.  You can stroll leisurely from the beach to the center of town in a matter of minutes.  You can sit in the park on the bluffs and lose yourself in the horizon.  The flip-flop pace is slow and the carefree inhabitants always seem relaxed and happy.  Like Brigadoon, Del Mar is simple, romantic, and idyllic.

I keep returning to Del Mar, just as I did when I was a boy.  Growing up in the bustle of Los Angeles, Del Mar was only a two-hour drive south by car or an effortless journey by train; yet always seemed a world away.  My family spent the summers at our house on the beach, including countless hours in the sand and surf.  In those days – a half-century ago or more (gulp) – Del Mar was as modest a burg as you can imagine.  The beachhouses were drab single-story wood-sided bungalows.  A walk on the shore encountered a lot of seaweed and rocks and only an occasional shell.  The town was unremarkable; more practical than boutique.  My child’s eye recalls the 7-Eleven as a highlight; the only place a kid cared about thanks to its Slurpees and pinball machines.  Del Mar’s drugstore was almost forgettable, except you could buy chocolate malt tablets (meant for indigestion but candy to us kids).  The park contained a snack shack where you couldn’t get much more than a grilled cheese and a Coke.  And my friends and I used to sneak under the highway through a culvert, giving us a back door entrance to the nearby horse-racing grounds.  I can still picture the jockeys, exercising their thoroughbreds in the ocean waves.

Del Mar is a wholly different animal today.  The draw of the coast, the consistently good weather, and the summer horse-racing season has transformed a modest locale into quite the tony address.  The beach is groomed daily and the sand is marked into areas for swimming and other areas for games and still other areas for dogs.  The hotel commands a nightly rate of $350.  The park on the bluffs is all spruced up – no more snack bar – and used for concerts and festivals.  A sunset wedding/reception sets you back $4k just for the use of the park.  The local Starbucks sells enough coffee and tea to rank among the most successful locations in the country.  The racetrack patrons hit the town in their Sunday best the first day of the season (think Kentucky Derby).  And most notably, a house on the beach – with a very narrow slot of property abutting the ocean – cannot be had for less than $10 million.  Yes, Del Mar is all dressed up these days and hardly simple.

But it’s still my Brigadoon.

My family and I make our annual pilgrimage to Del Mar every July.  We leave behind landlocked Colorado for yet another taste of the sun and surf and salty air.  And as soon as I arrive, the little town I remember reveals itself to me from the fog that has enveloped it over the years.  The fancy shops, restaurants, and patrons step aside in favor of the simpler and more idyllic memories of the Del Mar I first fell in love with.  If it were possible, I might just choose to take a leap – forever – into the Brigadoon of my yesteryear.