This morning as I brushed my teeth, I could hear soft music while my wife surfed on her iPad nearby. It was a catchy keyboard instrumental, the kind of tune to put a bounce in your step. Not twenty seconds later however, there was a bit of silence followed by the same melody all over again. By the time I flossed I’d heard this “song” five or six times through and it was getting annoy-oy-oy-ing.  Then it hit me.  My wife was on her iPad – yes – but she was also on hold.

Elevator Music. Lift Music. Piped Music. Muzak. Call it what you want, but my unofficial survey says hold music is not the satisfying little concert it was designed to be.  How many times have you heard, “Thank you for your patience… one of our representatives will be with you shortly…” followed by the same cloying music over and over and OVER again?  You pull out your teeth (I mean, your hair) because “the representative” will NEVER be with you (let alone “shortly”).  More to today’s point, the persistent music-on-hold (MOH) doesn’t lighten your mood, and, it’s an insult to technology.

MOH had the best of intentions when it debuted in 1962.  Like many products MOH was invented by accident, when the phone lines of a small factory accidentally picked up the music of the radio station next door.  MOH appealed to businesses because customers stayed on the line longer if offered music over nothing at all.  Hold music also found an audience in places where people tended to gather, like elevators, waiting rooms at doctors’ offices, and airport boarding lounges.  You should agree; music beats silence any day (in other words, something is better than nothing).  It’s just, the “something” should be a whole lot easier on the ears.

I have a personal connection with hold music.  Years ago, it was a part of my responsibilities as the switch programmer for a long-distance phone company.  If you call customer service today – any customer service – oftentimes “events” happen before you’re connected to a real person.  How many times does the phone ring before someone (or something) answers?  Are you offered a menu of choices to route your call to a specific department?  Would you prefer a callback instead of waiting on hold?  A behind-the-curtain person programs these little events and that person was me.  I also chose when to offer you hold music.

Mercifully, my long-distance company subscribed to a professional hold music product, which meant calls to our customer service were offered pleasant, non-repeating tunes.  You might have to wait fifteen or twenty minutes but at least you wouldn’t get a mindless tune, slowly eating away at your brain cells.  Unfortunately, my company was the exception.  Professional hold music isn’t cheap (thanks to copyright law) and most companies don’t care enough about their customers to pony up.  So, you get “catchy” keyboard instrumentals instead.  Even worse, you get the endless loop of tape-recorded music (a tape recording!), including the hiss and pop of too many plays.  Like I said, an insult to today’s technology.

You might disagree about the loss of brain cells. “Not ME, Dave; I don’t get hold music stuck in my head“.  Okay, but listen to the following YouTube audio and then reconsider.  This ditty may be the most famous music-on-hold specimen of them all; the so-called “Opus Number One”, composed by Tim Carleton and Darrick Deel and incorporated into every single Cisco phone system.

The days of hold music are numbered (and thank heavens they are) because the days of live customer service are numbered too.  Today’s customer service has you self-diagnosing through torturous “interactive voice response” (IVR) menus or by scrolling online through endless lists of FAQ’s.  But MOH still has its place at other tables.  The sophisticated InBody body composition scale at my fitness club offers MOH while you stand there getting your vitals measured.  Our Samsung washer and dryer play the same happy [irritating] little tune after every load is done.  And elevators aren’t going anywhere (except up and down).  You’ll still hear plenty of Muzak on elevators.  At least today’s smartphones help riders escape their awkward proximity to strangers.

The next time my wife is subjected to hold music, I may have to move to another room to brush my teeth.  Then again, maybe it’s not so bad.  You can now buy toothbrushes with built-in hold music while you brush (lasting exactly two minutes). This would be detrimental to my dental hygiene. I might tear my teeth out before I even get to the flossing.

(Read about how this project got started in Let’s Make Music!)

At long last, our piano has a keyboard! Bag #15 – of 21 bags of pieces – added the final key to the right side of the board for a “grand” total of twenty-five.  Then the whole assembly slid into the piano frame smoothly, as if closing the drawer to your bedroom dresser. The piece of the black frame running the length of the board just below the keys secures everything into place. 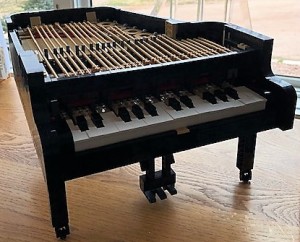 As a part-time perfectionist, I’m a little bothered by the fact the piano keys don’t rest at a uniform height across the board.  You can see one to the far left sitting a little higher than his neighbors while one to the far right sits a little lower.  Removing the keyboard at this stage in the performance is easy, so I might see if I can level things out.  Or, I’ll just make peace with being a little “off-key”.  Maybe.

Conductor’s Note: Charles Ives’ The Unanswered Question is one of the most creative classical pieces you’ll ever hear.  It’s a “dialogue” between a trumpet and four flutes.  The trumpet asks the question, “What is the meaning of life?“, and the flutes try in vain to answer, a total of six times.  The flutes get more and more frustrated (and the music more disjointed) every time the trumpet repeats the question.  The Unanswered Question concludes with the trumpet asking its question one last time.  Now that you know the story, listen to the short piece through the following video.  It’s only six minutes.  The Unanswered Question was the perfect choice for today’s topic.  After all, how many times do you call customer service only to come away with… an unanswered question?