Emily Post’s Etiquette is surely an authority on its topic, considering the book was first published in 1922 and is now into its nineteenth edition. I would’ve enjoyed meeting Ms. Post, as Etiquette remains “the most trusted resource for navigating life’s every situation”. The advice never veers from its original premise, simply adapting to times as they change.  Of course, it’s all about manners – good ones at that. And were Emily Post alive today, she’d have us flip to Chapter 13, for a review of a practice of growing concern (and confusion).  Chapter 13 talks about tipping.

I’ve written about tipping before.  Three years ago (!) I told the story of my family’s visit to New York City, and the cabbie who crammed the six of us into one vehicle, then demanded a bigger tip than I gave, as a reward for saving the cost of a second cab.  I disagreed with him, because I believed – still do – a tip reflects the service itself (which was marginal).  More importantly, the recipient should never expect the tip, let alone argue over the amount.

So-o-o, why is tipping such a hot topic now?  Because restaurants and coffee shops are moving to point-of-sale (POS) technology at the counter, allowing the customer to complete the transaction through an iPad, no cash required.  POS software (like Square) includes a tipping screen, offering suggested percentages/amounts, or no tip at all.  It’s a change to the social dynamic.  Before POS, you could discreetly add (or not add) a tip to your receipt before signing, or perhaps throw a few coins into the jar.  With POS, the tipping decision is forced on you at the front of the line (hurry up!).  And don’t be surprised if the person behind you sneaks a peak while you choose your tip.

My issue is not with the POS technology itself.  I like the security of completing a transaction (i.e. the credit card never leaves the hand), and I don’t mind navigating a couple of iPad screens to do it.  What I do mind is “tipping manipulation” as I’m standing at the counter.  The suggested amounts are the first thing you see, and beckon in LARGE FONTS.  To leave a smaller amount requires additional screens.  The “No Tip” option sits at the bottom like an afterthought.  Behavioral science says you’ll almost always choose from the top row, whether the service deserves it or not.

POS software gives the merchant the option to remove the tipping screen altogether, but I’m not suggesting they go back to a jar of coins.  Instead, before the tipping screen, why not insert a common courtesy (channeling Emily Post here): a screen simply asking, “Would you like to leave a tip?”

If your habit is to always (or never) leave a tip, consider the variables behind the curtains.  Some businesses adjust employee pay down if the position receives tips.  Other businesses pool tips, then divide the pot between all service positions (did you really intend to tip the dishwasher)?  The American Restaurant Association claims some states allow service businesses to pay less than minimum wage, because tips are legally considered wages.  Finally, minimum wage varies by state, so a nice tip in one state might be an insult in another.  Yet you, the tipper, have no idea if one or more of the above applies as you’re about to pay.  Messy, no?

Timeout for a favorite tipping story.  After years of one-on-one sessions, my personal trainer decided to resign my athletic club and pursue another career.  Knowing she was leaving, I asked if I could leave a tip with my final payment.  She declined, saying club policy did not allow tips.  However, she said, I could give her a positive review through the club’s on-line survey, and then she would likely receive a bonus in her paycheck.  Money and acknowledgement by her manager?  I completed the survey.

Someone once said, “Tips are like hugs, without the awkward body contact.”  I like that, except we’re starting to get awkward again.  POS screens allow for invasion of personal space, bringing tipping into the open.  Maybe Square should take a “tip” from Starbucks.  Use the Starbucks app to pay with your phone at the counter, and the tipping comes later, in the privacy of your own whatever.  You’re given several hours to consider if and how much you should tip.  I think Etiquette Chap. 13 would agree with that approach.

I’ll continue to be a savvy tipper, no matter what I’m faced with.  If I use a POS iPad, I’ll go with a “Custom Tip Amount” if I need to.  If I sign a credit-card slip, I’ll always tip on the pre-tax amount and I’ll never blindly choose 15%.  If it’s cash in hand, I’m at the mercy of the denominations I have in my pocket.  And in every case, I’ll ask myself the same question Emily Post would pose: “Did I receive notably good service?” 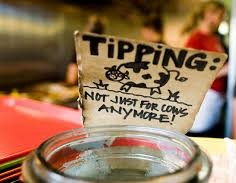 Some content sourced from Wikipedia, “the free encyclopedia”,  from the Wall Street Journal article, “You Want 20% for Handing Me a Muffin?”, and from the USA Today article, “How Much to Tip…?”