In the midway of the wonderful San Diego Zoo Safari Park in California, you’ll find a colorful attraction called the “Conservation Carousel”. Unlike traditional carousels teaming with horses, the Safari Park merry-go-round boasts giraffes, rhinos, zebras, cheetahs, and other “rare and endangered creatures”, just waiting to be taken for a spin. It’s a full-on circle of animals. It’s like riding a zodiac.

Speaking of the zodiac, what’s your sign?  I’m an Aquarius (born in late January), which makes me water-bearer to the gods.  As much as I don’t subscribe to horoscopic astrology – a visual representation of the heavens to interpret the inherent meaning of life – I can’t deny water’s played a significant role in my world.  I spent childhood summers in the Pacific Ocean and the backyard pool.  I lazed away hours in Northern California’s Lake Tahoe, swimming and water-skiing.  I’m enjoy a lively display of water, whether Niagara’s Horseshoe Falls or the fountains of Vegas’s Bellagio Hotel.  A gentle rain is nature’s therapy.

But then there’s the hell-or-high-water side of things.  Literally since our wedding night (when my bride and I awoke to dripping from the bed-and-breakfast room above us), the two of us have endured all manner of water problems.  A fully flooded basement.  A backed-up septic system.  Drinking water with a PH so out-of-whack we had to install a conditioner and a neutralizer.  Our well water quit pumping one time – for days – when a squirrel chewed through the electrical connection.  It’s like those gods have nothing better to do up there than play games with their little water-bearer down here on Earth.  If it were up to me I’d spin the zodiac wheel and land on another space instead.

Turns out my wish may have already been granted.  According to the Wall Street Journal, the earth maintains a wobble in its orbit around the sun, caused by gravitational pull on its not-so-perfectly-round midsection.  That wobble (called “precession”) – projected over the last several thousand years – shifted the alignment of the Earth with the zodiac constellations as the Sun passes through them.  Long story short, everything astrological advances one month on the calendar.  In other words, you rams out there (Aries) are actually fishes (Pisces).  You maidens (Virgo) are now lions (Leo).  And us water-bearers (Aquarius) – mercifully – are now mountain goats (Capricorn).

With more passing of time, the earth’s Weeble-wobble will redefine basic astronomy as we know it today.  Take Polaris, the “North Star” at the end of the Little Dipper, and the starting point to locate the more distant constellations.  A few thousand years from now, Polaris will give up its position to Vega, another bright star.  All because our planet is a little fat in the middle.

With talk of a “changed world” after a curbed pandemic, I think it’s high time for me and you to adopt our newfound zodiac signs.  Goodbye Aquarius.  Hello Capricorn.  To preview my new persona, I looked at today’s horoscope in the local paper: A conversation with a female acquaintance will be important to you today. This is a good time to share your hopes and dreams for the future with someone to get his or her feedback.  Bless my lucky stars – I’m to check with my wife before moving one position on the astrological merry-go-round.  Seriously?  What does she know, holding court from under the sign of Cancer?  Whoops – make that under the sign of Gemini instead.  Either way, she can finally refer to me as, “you old goat, you”.

Some content sourced from the 2/21/20 Wall Street Journal article, “You’re a Scorpio?  Why the Earth’s Wobble Means Your Zodiac Sign Isn’t What You Think”, and Wikipedia, “the free encyclopedia”.

Two parts hydrogen compounded with one part oxygen.  Transparent, odorless, and tasteless, yet we can’t survive more than a few days without it.  If not for oceans, lakes, ponds; rivers, streams, and creeks; and a whole lot of underground aquifers, we humans would be in a heap of trouble.  With due respect to Harry Potter, water is the elixir of life.

It’s fair to say most of us don’t drink enough water for optimal health. The long-held belief that eight glasses a day is sufficient has been replaced by the following formula: your body weight in pounds, divided by two, expressed in ounces. For most of us that means even more than eight glasses.  Gulp.

Somewhere along the way of several years of working out, I developed the habit of drinking small amounts of water during exercise, instead of chugging just before or just after.  On the treadmill for instance, I take a slug every time I complete a kilometer.  In the cycle class I drink every time the instructor says to pick up the bottle.  In a road race I never pass up the tables of water cups.  No question; the body works better with a regular intake of water.  Or at least a splash to the face.

Whenever I know I’m not drinking enough water I recall two vivid memories where I reached full-on dehydration status.  The first occurred as a child, when I was driving in the desert with my family.  I let the day go by way too long without taking a drink, and before I knew it my throat was so parched I could barely speak.  The heat of the day surely made it worse.  I pleaded to my grandparents to stop at a gas station (or anywhere with a halfway sanitary drinking fountain), which we eventually did, and I’m sure I took in a quart or more to quench my thirst.  Here’s a little irony: my desert dehydration is a fond memory because I can still hear my grandfather’s distinctive voice, saying, “need to wet your whistle, do ya?”  That was over forty years ago.

My second “parchment” occurred just short of the summit of Pikes Peak here in Colorado Springs – the first time I climbed it.  Pikes Peak is the highest mountain in the southern Front Range of the Rockies, at just over 14,000 feet.  Using the popular Barr trail it’ll take you five or six hours to get to the top.  Despite recommendations to carry a lot of water I only brought one 12-oz. bottle in my pack, which I refilled at a campsite halfway up the mountain.  I was getting by okay until the very last mile, when I ran out of water and my body literally began to shut down.  The combination of the effects of dehydration and altitude was devastating.  I could only walk a hundred yards at a pop, taking a seat on the rocks each time to recover for several minutes.  Mercifully I was close enough to the summit that I finished the hike, but not before realizing I’d been woefully unprepared.  In extreme circumstances the body demands a lot of water.  Certainly more than half your body weight in ounces.

If an elixir is defined as “a magical or medicinal potion”, then water qualifies in my book, and especially here in the high altitude of the Rocky Mountains.  It took a few years for me to gain a little thirst knowledge, but now my water bottle is my constant companion.  On that note, I think I need a drink!

Someone once described me as “wet behind the ears”.  At the time I didn’t realize I was being called naive.  I thought it really was about the water.  You know, do a better job toweling off after the shower.  Use the hair dryer longer. 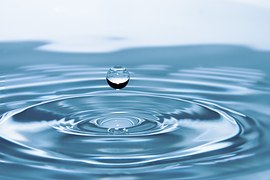 Now that I’m older and supposedly wiser, I still believe it’s about the water.  For an opening argument consider my astrological sign.  I’m an Aquarius – the so-called water-bearer.  Aquarians are more nobly representative of “the Gods nourishing the earth with life-giving energies”.  Not from my experience.  We January/February birthdays are all about the wet stuff.

I should have seen this coming, really.  Twenty-eight years ago, in the San Francisco B&B where my wife and I spent our wedding night, we awoke the following morning to a steady drip onto the middle of our bed from the ceiling above.  What a fitting prelude to the years that followed.

The ball really got rolling (correction: the river really started running) with the handful of houses we’ve purchased over the years.  Our first place – a townhouse – was built on landfill.  That landfill began sinking years before we bought the place.  There weren’t water problems to speak of, but the bulk of our monthly homeowner’s dues paid for fixes to the leaking underground plumbing (not to mention the lawsuit that came with it).

Our second house – a modest old lady from the 1940’s – endured the 1989 San Francisco earthquake.  There wasn’t much damage, except the water heater fell over in the garage, and for awhile we had a nice little stream from our driveway to the street.

It gets better.  In fact, our third house was the piece de resistance of our liquid adventures.  This place was somehow built without a french drain;  essential for transporting water away from the building foundation.  In the spring of that first year therefore, the melting snow turned our basement into a scene from Titanic.  You’ve heard the term “floating ceiling”?  This was “floating floor”; carpet, furniture, and all.

The house we live in now – on several acres of land – includes a retention pond that is part of a network of neighborhood creeks and reservoirs designed to move water safely through the region.  But we had no idea the previous owners dug out our pond much deeper than its engineered specs.  So the first really good spring rain not only overflowed the pond, but broke the dam to the creek that moved through downstream properties.  The result: a custom-made flash flood.  Our neighbors received so much surface water they should have gone into the rice paddy business.

In my research on astrological signs, I came across the website beliefnet.com, which hosts a ten-question quiz to determine which element – air, earth, fire water – best describes a person.  On a 0-100 scale, a “water person” is between 21 and 50.  Does it surprise you my answers rated me a 41?  Then again, I’m not sure how much credence I can give to a quiz where “water people” are described as “go with the flow”, “bubbly”, “enjoy meditation especially in steam baths”, have eyes that are “deep and liquid”, are “prone to tears”, are “inconsistent as the tides”, and possess a wonderful sensitivity that can “go overboard”.  Somewhere the water gods are laughing at me.

You think I’d learn.  Every summer we spend our vacations at the seashore.  Last month we took a cruise.  Most hours of the day my companion is a glass of water.  For heaven’s sake, do you SEE the banner photo I chose for my blog?  It’s as if I’m taunting those gods of Aquarius.  But I think this is more of a fate thing.  And I’m not naive about this anymore either.  I’ll bet you a case of Dasani it won’t be long before something new rains on my parade.