A man losing his wallet is akin to a woman having her purse stolen, even though a wallet is typically so much smaller.  The same level of angst and helplessness ensues when you realize this most personal of belongings is gone.  I should know, since I lost my wallet last Sunday at a baseball game in Denver.  But it was returned to me sooner than I expected, and that simple act of charity will leave an imprint far deeper than the carelessness of my actions. 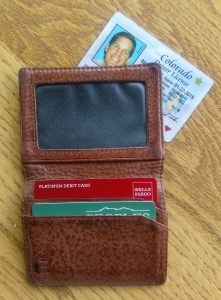 Ironically, I made a deliberate effort to protect my wallet from the game-day crowds.  I put my cell phone in the same front pocket, making my wallet more difficult to “lift”.  It would take some real effort to bring one or the other item out into the open.

But that’s exactly what I did.  Unbeknownst to me, when I took out my phone after the game my wallet was pulled along with it, dropping unnoticed onto the gravel of the parking lot.  And off we sped for home, none the wiser.  Three or four blocks later that moment of angst kicked in when my hand grazed my now empty front pocket.  A frantic glance around the driver’s seat revealed the obvious: my wallet was really, truly gone.  Even though we were back to the parking lot minutes later (where we wondered whether this was a “loss” or a “lift”), our search through the gravel was fruitless.

Now I’d like you to meet Karen, my new friend. Karen lives here in Colorado Springs, maybe on the south side of town. She enjoys going to baseball games on Sunday afternoons. That’s all I know about her (and may ever know), but let’s add one more thing. Like the fellow from the Bible parable, Karen is a good Samaritan. 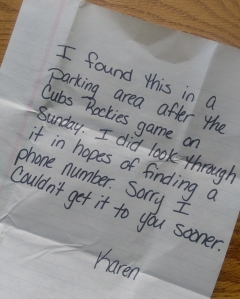 My wallet showed up in my mailbox last Thursday – intact and virtually untouched – wrapped in the note you see above.  What struck me immediately about Karen’s actions was the following: 1) she spent $2.50 or more for the envelope and postage; 2) she apologized for not getting my wallet back to me sooner; and 3) she chose to remain anonymous.  There was no return address on the envelope and the USPS tracking number protected Karen’s contact information.  In this day and age I am somewhat in awe of her decent, anonymous gesture.  My wallet may have fallen to the parking lot but it also fell into the right hands.

The same day my wallet showed up in my mailbox our local newspaper reported a nearby incident involving a stolen wallet from an unlocked car.  The thief is still at-large, and he/she attempted a purchase with one of the credit cards immediately after the steal.  I can’t help but think this is more than just a coincidence of events.

So thank you Karen – whoever and wherever you are.  I may not be able to repay your actions but I can certainly follow your lead.  After all, the world needs more good Samaritans like you.