Let’s visit the dog days of summer; specifically, a day in the middle of last week. In England, on the highest mountaintop in the land, a group of sixteen rescuers carried an ailing dog down to safety – a rescue operation of more than five hours. These heroes didn’t rescue just any dog; they rescued a full-grown St. Bernard.  Put that image in your head for a moment. People coming to the rescue of a St. Bernard.  That’s “Role Reversal” with capital R’s.

“Daisy” – the St. Bernard in our story – was descending England’s Scafell Pike last week (owners in tow, presumably) when she experienced pain in her rear legs and refused to go any further.  Rescuers consulted a veterinarian before administering meds, food, water, and treats (lots of treats).  Then they loaded the 121-lb. doggie onto a stretcher and eased their way down the mountain, navigating several steep stretches, rocks, and a waterfall.  Daisy was the model patient the whole way down and it turns out this was her second rescue.  Her first was by her owners, from a relatively “hard life” into a better one just a few months ago.

Saving Daisy strikes a chord with me not just because she’s a feel-good story (and we need plenty of those these days), but also because my wife and I own a St. Bernard ourselves.  “Remy” is six years old and lives with us on our ranch, alongside horses, cats, and occasional wildlife.  Remy came from a breeder in Nebraska about six hours to the east.  He joined our family when he was only eight weeks old.  Look at him now!

When I read about Daisy’s rescue my first thought was, “how the heck did a St. Bernard get to the top of a mountain?  To explain, St. Bernards have typical dog gears like sprint, walk, and idle.  The difference: Daisy and Remy spend 95% of their time in “idle” lying down.  Yes, they can “sprint”, but only for about thirty seconds (followed by “collapse”).  They can also walk short distances – say, to the mailbox – but like Daisy, when they choose to “idle” you’re not gonna get ’em to move an inch.  Daisy is a svelte 121 lbs. so maybe she has more gas in the tank than most.  Remy is 160 lbs.  Our first St. Bernard “Sebastian” was well over 200.  They don’t call ’em “gentle giants” for nothing. 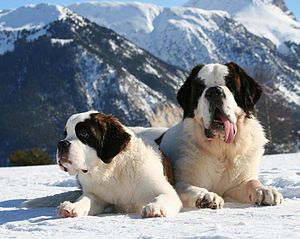 A St. Bernard and a mountaintop isn’t an unusual combination, of course.  These big boys were originally bred to be Alpine rescue dogs by monks on the Great St. Bernard Pass between Switzerland and Italy (hence the name).  It is said St. Bernards rescued 2,000 people over a span of 200 years from Alpine snowstorms.  I’d say they’ve earned their reputation as rescuers (and working-class dogs).

We named our dog “Remy” after Remy Martin, the cognac variety of brandy.  Perhaps you’ve seen images of St. Bernards with barrels of brandy around their necks.  As romantic as it sounds – a big furry rescue dog bringing stiff drinks to avalanche survivors for warmth – the whole idea is just folklore.  Even the Great St. Bernard Pass monks say they’ve never put a barrel on a Bernard.

If Daisy’s anything like Remy, her owners make accommodations atypical of most dog owners.  A water bowl isn’t big enough for a Bernard; better go with a bucket.  Add a large waterproof mat under the bucket because it seems one-third of every slurp ends up on fur or floor.  For those (very short) walks, forget the leash and go with a heavy rope instead (we use a horse’s lead line).  Also, you’ll need a doggie ramp for the car because Bernards aren’t so agile.  While you’re at it, trade the car in for one with a high ceiling clearance.  And be sure to crank the AC so all the panting doesn’t fog the windows.

St. Bernards are classified as “working dogs”; a tribute to their rescue skills.  They compete in dog shows like other breeds, but less in agility and more in carting and weight-pulling.  St. Bernards have starred on the silver screen, as the good (“Beethoven”), the bad (“Cujo”), and the animated (“Nana” in the Disney version of Peter Pan).  I think Daisy’s story might be an even better “Incredible Journey” script, don’t you?  After all, St. Bernards have been rescuing people for thousands of years.  Now we finally get one asking for our help. It’s about time the shoe was on the other foot (er, paw).  Glad you’re okay, Daisy!

6 thoughts on “Saving (the) Daisy”