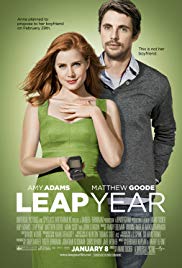 In 2010, New York City premiered a wee little romantic comedy called Leap Year. The movie starred Amy Adams and Matthew Goode, and spun a creative love story around a Leap Day tradition of marriage proposals. In Ireland (and Britain), the tradition held if a woman proposed to a man on February 29th, the man must accept her offer or face significant penalty. Leap Year begins in Boston with the intent of ending in a Dublin marriage proposal, but the coastal Irish town of Dingle (and Matthew Goode) gets in the way. That’s where the real story begins.

If you haven’t seen Leap Year, you’ll have to search elsewhere for the complete plot summary. Just avoid the movie reviews. Leap Year earned a not-even-modest 23% approval rating on Rotten Tomatoes, and a not-even-one-third 33 out of 100 on Metacritic. My favorite assessment comes from reviewer Nathan Rabin, who concluded, “The film functions as the cinematic equivalent of a (McDonald’s) Shamrock Shake: sickeningly, artificially sweet, formulaic, and about as authentically Gaelic as an Irish Spring commercial”.

Yeah, I get it. Mr. Rabin refers to the several “overly-Irish” details in Leap Year, which seek to pay homage to the country’s culture but instead come off as cliched (with a capital C). But do viewers really care? Leap Year‘s underlying story is fun, and even if rom-com isn’t your bowl of Irish Stew, at least you have Amy Adams and Matthew Goode. I repeat, Amy Adams and Matthew Goode, two of the most appealing actors in the movie industry today.

I’ve been hooked on the lovely Ms. Adams ever since she took her Oscar-nominated spin as Giselle in Enchanted (2007). It doesn’t hurt she grew up just a few minutes north of where I live here in Colorado. My wife’s been hooked on Matthew Goode ever since he stole scenes from Mandy Moore in Chasing Liberty (2004). It doesn’t hurt he added a passable Irish accent in Leap Year. Both actors have been nominated for awards in far better films, but put them on the big screen together and a little chemistry goes a long way.

Speaking of leap year, my preference for order and logic takes a serious hit whenever the short month of February rolls around. A month of twenty-eight days when the other eleven have thirty or thirty-one? Why not just reduce two or three other months from thirty-one to thirty days and make February “full”? The only credible historical explanation I can find is this: Caesar Augustus stole a few days from February to make his month (August) as long as Caesar Julius’ (July).  We future generations are left to deal with the anomaly. Gee, thanks Gus.

In a rather odd example of redemption, February gets extra attention by boasting an extra day every four years. We need the quadrennial Leap Day to put the calendar, the seasons, and the universe back into sync. Not so fast, Mr. March. And yet, pity the poor souls born on Leap Day. Must’ve been pretty traumatic as a kid, trying to understand why your special day doesn’t show up on the calendar like the other kids. Or consider a “leaper’s” 21st year (or whatever year one earns drinking privileges). How do you convince the barkeep you’ve reached your drinking birthday in a year without a February 29th? 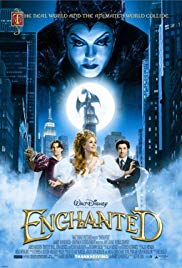 Perhaps you’ll “celebrate” Leap Year 2020 by seeing the movie of the same name. We’ll watch Leap Year for the zillionth time. My wife will remind me Matthew Goode’s character and her own Irish Draught horse share the same name (Declan). I’ll remind her several Leap Year scenes take place in Connemara and County Wicklow, two of our favorite places in Ireland.

Matthew Goode recently admitted, “I just know there are a lot of people who say (Leap Year) was the worst film of 2020″. But Goode also admitted to signing on so he could work closer to home and to see his girlfriend and newborn daughter more often. Doesn’t that make the (English)man even more likable?  Maybe.  At least Amy’s doing a sequel to Enchanted.

Some content sourced from Wikipedia, “the free encyclopedia”, and the 2/28/2020 Wall Street Journal article, “Leap-Year Babies Fight a Lonely, Quadrennial Fight for Recognition”.