During our town’s annual “Parade of (new) Homes” last summer, my wife and I came across a master bathroom with two showerheads in the same space. The fixtures were mounted on a single wall, almost beckoning the future owners to a side-by-side shower date. Several other couples gave pause alongside us. Shower at the same time? Nope.  We’re not among the 77% who love the idea. On the other hand, my wife and I would never give up our side-by-side sinks.

In a recent Wall Street Journal article, “My Biggest Remodeling Regret…”, the author bemoans the lost space consumed by her dual master bathroom sinks.  She says, in hindsight, she would’ve exchanged the space of one sink for a linen closet.  Remarkably, in the seven years since the remodel, she claims she and her husband never used their side-by-side sinks simultaneously.  In a nutshell, she’d prefer to spend her bathroom time alone.

We’re in the midst of a remodel ourselves, which displaces my wife and I to the upstairs for several months.  As a result, we’re sharing a bathroom with one small sink.  It doesn’t work very well for us.  Why?  Because we like our own sink real estate.  We like the freedom of our respective bathroom routines whether or not we’re both in there.

Bathroom habits speak to our individuality, don’t they?  What works for my wife, what works for me, and what works for our juxtaposition may be a far cry from your own preference.  Consider this scenario: would it bother you if your connecting bathroom were open to your bedroom (that is, no door)?  I’ve seen several layouts where the bathroom counter is the first thing you see when you prop yourself up in bed.  Ugh.  Our bathroom demands a door.  Having said that, I have no problem barging through said door, even if my wife is in the middle of getting ready.  Why?  Because a) we’re comfortable sharing our bathroom routines, and b) the toilet has its own little room; a “water closet” with a door. 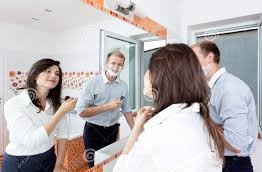 But why side-by-side sinks specifically?  Because we often get ready for the day (or the night) at the same time.  Sure, we’re pretty good about weaving and bobbing around each other with a single sink (like we’re doing right now), but I much prefer grooming in my own space.  Then there’s the chatter.  We routinely ask each other’s mirrored reflections “how does your day look?” or “how does tomorrow look?” while we’re in bathroom sync.  We’ve done this for so long I can even understand my wife’s responses through her teeth-brushing.

The Journal article spends several paragraphs lauding the opportunity for privacy in the bathroom – not because habits are embarrassing, but because the bathroom can be a therapeutic escape from the chaos beyond its doors.  The bathroom is cozy-small.  The bathroom is typically simple and without clutter.  The Journal suggests magazines or iPad time or even singing (singing?) to promote rejuvenation.  I’m not here to dispute the notion.  I’m simply saying the bathroom’s not where I’d choose to rediscover my mojo.  Pretty sure my wife feels the same way, else I’d lose my barge-through-the-door privileges.

I’ll concede one point to the Journal.   The author brings up (and promptly tears down) another recent side-by-side trend: toilets.  Really?  “Going” at the same time?  Then again, I see more and more men un-self-consciously on their phones while “taking care of business” in public restrooms.  Maybe they’d be okay with a bowl-by-bowl conversation.  Seriously, how would you feel about receiving a call from a public restroom?  I’d reach for the hand sanitizer. I’d also demand the caller focus instead on his/her business and call back later.  Much later.