On a first visit to The Netherlands earlier this year, our plan was to traverse the quaint canals and bridges of Amsterdam, stand in the shadows of Kinderdjyk’s working windmills, and learn more about the country’s wartime era, perhaps through a stop at the Anne Frank House. I also looked forward to a field of their famous tulips, and Dutch treats like stroopwafels, poffertjes, and bitterballen.  Sure, I ticked the boxes on several of these items, but I was also blindsided by a group-tour-captive stop at Amsterdam’s Rijksmuseum. 8,000 artworks covering 800 years of Dutch history (in what felt like 80 different rooms)?  Not my idea of a delightful morning in Holland.

I’m not what you’d call a “patron of the arts”, though I’m about to contradict myself.  I love a classical performance by a symphony orchestra.  I’m drawn to the theater’s foremost stage productions (Les Miserables comes to mind).  I even enjoy the occasional visit to a museum, provided the subject is specific and of my choosing (ex. Amsterdam’s Dutch Resistance Versetsmuseum).  But endless rooms of paintings on walls and free-standing sculptures behind glass?  As the Dutch would say, nee bedankt ik zal slagen.  No thanks, I’ll pass. 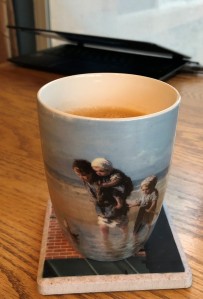 Here’s where I contradict myself a second time.  As I type this post I’m sipping morning coffee from the mug in the photo.  The mug is a souvenir from my “captivating” visit to the Rijksmuseum.  The painting on the mug is called “Children of the Sea” (1872), by Dutch artist Jozef Israels.  Go figure; I was able to blow past the throngs flocking to the Rembrandts and Vermeers and van Goghs; yet a small artwork in the corner of Rijksmuseum Room 118 captivated me enough to take a little piece of it home.  I probably spent as much time in front of that painting as I did the rest of the museum.

Naturally I had to learn more about “Children of the Sea”.  When I returned to Colorado, I read up on Jozef Israels.  Not only was he “… a leading member of a group of landscape painters known as the Hague School…”, Israels was “… the most respected Dutch artist of the second half of the nineteen century”.  Do I know how to pick ’em or what?  Maybe I have a little art appreciation in me after all.

“Children of the Sea”, as you might expect, offers a deeper message than a group of kids playing on the beach.  Their simple clothing and toys hint at a life of poverty.  The eldest child is quite literally carrying his family on his shoulders.  The boat suggests the rigors of life at sea.  From that perspective, I find the painting even more enthralling.

Adjacent to “Children of the Sea” in Rijksmuseum Room 118, I also enjoyed a moment in front of the artwork shown above.  It is called “Morning Ride along the Beach”, and I mistook it for another Jozef Israels masterpiece.  Instead, “Morning…” was painted by Anton Mauve, another Dutch painter of the same era (and Hague School).  “Morning…” provides a contrast to the harsh existence of the poor fishermen of the time, by focusing instead on the “well-to-do bourgeoisie”: horses, elegantly dressed riders, bathing cabins – all on a pastel-colored sunny day.  No souvenir mug with this one, but equally compelling to the eye.

Admittedly, the Hague School paintings weren’t the first artwork to stop me in my tracks, nor were they the last.  In my college year of architecture studies in Rome, the Renaissance-era paintings and sculptures were as impressive as the cathedrals that housed them (I could write an entire post on the stunning chiaroscuro works of Caravaggio).  Case in point, I was so taken by the life and work of Michelangelo I read all 700 pages of Irving’s Stone’s fictional biography, “The Agony and the Ecstasy”. 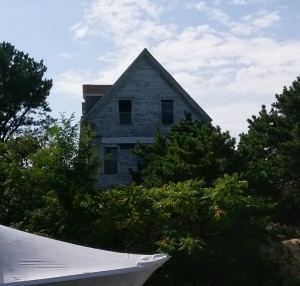 As for my latest artwork pause, my wife and I visited Cape Cod last month, all the way out to Provincetown at the tip.  One of Provincetown’s pier-side shops sold tiles of local artists’ paintings.  The tile above (left) – John Dowd’s depiction of a nearby Provincetown Cape house in 1997 – sits on our fireplace mantle now.  The photo above (right) is how the painter’s subject looks today.

Someday I would love to return to The Netherlands for more adventures, but I assure you my itinerary would not include another trip to the Rijksmuseum.  However, I can’t claim I wouldn’t pause on the sidewalk if I walked past the museum’s massive entrance.  After all, in Room 118 there’s a very small painting, utterly captivating to this non-patron of the arts.

2 thoughts on “Agony or Ecstasy?”