Among its endless and varied topics, Wikipedia includes a list of “notable chicken restaurants” (just about all of them U.S.-based). In the fast-food subcategory alone, you find over 75 fowl food-stops. I recognized about one in ten as I scanned the list, including Bojangles’, Bush’s, Church’s, El Pollo Loco, KFC, Popeye’s, Raising Cane’s, Wild Wings, and Zaxby’s. That’s a lot of drive-thru chicken. Yet put ’em all in the back seat, because I side with those clever Holstein dairy cows, begging me to “Eat Mor Chikin”.  And I do eat more – at Chick-fil-A.

As the kids morphed from teenagers to adults, fast food pretty much disappeared from our eating-out options.  Starbucks aside (because coffee is the elixir of life), we stopped navigating the circuitous drive-thru’s of McDonald’s and the like.  Our palates demanded better and healthier.  More appealing sit-down options beckoned on every street corner.  But Chick-fil-A stubbornly persisted in the mix, as if waving a banner with the words, “Exception To The Rule”.

No matter how you label it, there’s a lot to like about Chick-fil-A.  For one, it’s the great American success story.  Its origins trace back to founder S. Truett Cathy, and a 1960’s-era restaurant near Atlanta called Dwarf House.  Its popularity swelled through twenty years of growth in shopping mall food courts. Its first free-standing restaurant opened in 1986.  Today, you’ll find more than 2,400 Chick-fil-A’s scattered across the continent, including a prominent three-story location in mid-town Manhattan, and several in Toronto, Canada.

It’s all about the food, of course.  Chick-fil-A’s most-ordered entree – the classic chicken sandwich (breaded, with pickles and a butter-toasted bun) – is a recipe unchanged since its inception fifty years ago.  The signature waffle fries accompanying the entrees are the most popular item on the entire menu.  And Chick-fil-A’s lemonade and milkshakes have a devoted following all by themselves.  Some patrons cruise the drive-thru for nothing but the drinks.

There’s more to like about Chick-fil-A.  Their brand of customer service is exceptional.  Chick-fil-A is the only restaurant I know where you’ll hear the words “my pleasure” in exchange for your “thank you”.  Between your order, payment, and the window itself, you’ll probably get “my pleasure'” three times in a single drive-thru.  That kind of courtesy never gets old.

How about the numbers?  Chick-fil-A is the third-biggest U.S. restaurant chain ranked by sales (behind only Starbucks and McDonald’s).  Their sales have quintupled in the last ten years, to over $10.2 billion.  Chick-fil-A’s market share among fast-food chicken restaurants hovers around 33%.  Their nearest competitor – KFC – is a distant 15.3%.

Here’s one more reason to love Chick-fil-A: they’re closed on Sundays (as well as Thanksgiving and Christmas).  In the company’s own words, “Our decision to close on Sunday was our way of honoring God and of directing our attention to things that mattered more than our business.”  No matter the faith angle, you have to respect a restaurant giving its entire workforce the day off once a week.  Not to mention, a closed Chick-fil-A just makes the heart grow fonder. 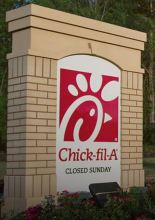 At the conclusion of the WSJ article, I found one hundred reader comments about Chick-fil-A.  I scanned half of them, and every last one was positive.  That’s a first for me.  In today’s cynical world, 100% positive feedback may be the most telling statistic of all.

Final factoid.  For all my allegiance to Chick-fil-A, I must admit I didn’t know the origin of the name – until now.  Go figure, it’s just a mash-up of “chicken fillet”.  And the “-A”?  “Grade A”, a subtle nod to the quality of the Chick-fil-A product.  No wonder those cows push you to lay off beef.  They’re offering chicken par excellence instead.