St. Patrick gets a lot of attention this time of year.  His Feast Day is March 17th, when many of us claim to be Irish.  We wear the green, march in the parades, run the 5k’s, and drink more than we should.  Over the centuries we’ve built massive cathedrals to Patrick’s name in Dublin and New York City and a dozen other cities around the globe.  But why does Patrick get all the love?  Did you know there are actually three patron saints of Ireland?  I’d like to talk about one of the others – my wife’s namesake Brigid.  Her Feast Day is February 1st. 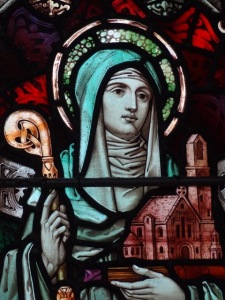 Three years ago Brigid and I visited Ireland for the first time.  While we toured the Emerald Isle we made a point of travelling to Kildare – not far from Dublin – to see St. Brigid’s Cathedral.  Kildare is delightful; the quaint Irish town of my mind’s eye.  St. Brigid’s Cathedral is its focal point, just above the town square.  It was constructed a long time ago but it’s still an impressive landmark.  You’ll learn a lot about St. Brigid here.  She had a way with animals (an absolute parallel with my wife), she was a patroness of students, and she was a female superior in the church.  In a nutshell, she knew how to get what she wanted (again, a parallel). 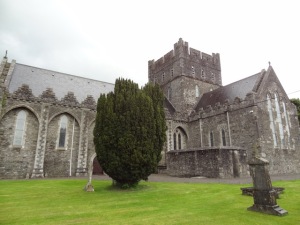 Brigid has fifteen “wishing wells” throughout Ireland; devotional places where the water is said to be holy.  The one we visited had a prayer tree full of ribbons and strips of cloth.  Animals watched us from a nearby pasture.

Let’s go back to Patrick for a moment.  Again, I’m not sure why he gets the spotlight.  Yes he’s a “patron saint” of Ireland (along with Brigid and some guy named Columba) but more specifically?  He’s the patron saint of engineers and paralegals.  That’s it.

Maybe Brigid deserves a parade too, huh?  Doesn’t she seem a little unsung?

Patrick made magic with shamrocks and banished a lot of snakes from Ireland.  Brigid performed at least eight miracles, founded several abbeys and monasteries, and built a school of art.  Need I say more?

We have a St. Brigid’s Cross in our house, which legend says protects the home from any sort of harm.  We also have a framed copy of her Blessing, which ensures the roof, walls, windows, doors, and fireplaces are all covered.  We are all about Brigid.

One closing comment.  After returning from Ireland it occurred to me there’s probably a little love for St. David somewhere in the world as well.  With a little research I discovered that St. Dave also has his own cathedral.  It’s on the west coast of Wales in the county of Pembrokeshire.  As the crow flies it’s less than a hundred miles from Brigid’s place in Ireland.

I think our next trip will be to Wales.

One thought on “unsung”