My 2002 “Red Rock Pearl” Acura has been my faithful companion for the last thirteen years.  She’s racked up an impressive 285,000 miles on Colorado’s streets and highways.  She’s weathered the extremes of winter blizzards, the instability of our roads (potholes! washboard!), and the novice driving skills of my formerly teenage kids.  Through it all she’s given me safe passage with a minimum of maintenance and repairs. 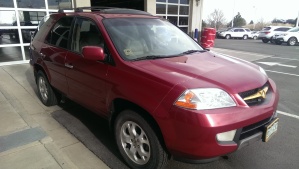 Back in 2002 when I purchased her new, the salesman claimed she would go 400,000 miles.  More than a decade later I’m inclined to agree.  When I take her in for service and see the newer models, I’m reminded there are still plenty of miles left in her tank.

When you’ve been with a car this long you tend to forgive the little things.  Like, the stereo holds six CD’s but at some point the mechanism jammed and now they’re all stuck inside my dashboard.  Or the GPS system has mapping which is slowly dating itself because it pulls from a DVD instead of a wireless network.  Or the gold accents I added when she was new that have long since fallen off the body.  Hail damage and a run-in with a pasture fence (driver to remain nameless) have left her less than “cosmetically pleasing”.

Recently my wife and I have been talking about getting a new car.  A newer-model Acura or perhaps another make.  Either way, a replacement for the old girl.  And to be honest, I don’t think “she” is happy about it.

Let’s address this “she” thing, shall we?  Somewhere in her early years my kids decided my car was a girl.  They named her “Roxanne”.  Forget the blow to my masculinity; giving inanimate objects names and personalities is just weird.  Cars have no feelings.  They are insentient.  Or are they?

None of these inconveniences compromises my safety or demands an immediate fix.  Instead, it’s as if “Roxy” is finding ways to discreetly disagree with the new car discussion.  I guess I can’t blame her – she’s been delivering me safely from Point A to Point B for almost a quarter of my lifetime.

Hold the phone.  Did I actually just consider my car’s point of view?