Last Friday was a hugely important day in America! It was so hugely important I couldn’t sleep the night before! I got up twice hoping it was already morning. I stared at the numbers on the bedside clock, willing them to go faster. Finally, when dawn’s early light beckoned, I leaped out of bed like a child on Christmas, dashed down the hall, and stepped into the laundry room. I was brimming with anticipation!  And there, standing patiently in the corner, tightly furled since last Independence Day: our American flag.  Quick as a mouse, I ran her out to the front deck and hoisted her in the most prominent place I could find. Then I took a few steps back and placed my hand over my heart.  To no one in particular I exclaimed, “Happy Flag Day!”

Poor Flag Day – she’s an underappreciated holiday.  She comes and goes with no more fanfare than pre-printed words on the June 14 square of a wall calendar.  She doesn’t even rate a Hallmark card.  She yearns to be a real holiday like those ten federal ones.   She wants to believe the events of my first paragraph actually happened.  But let’s get real.  In our house, the only excitement last Friday was knowing the weekend was at hand.  I slept without interruption the night before.  I didn’t get up at dawn.  And our flag remained furled in the corner of the laundry room, knowing its only chance to see the light of day would be July 4th.

Which is all to say, I’m missing the point of Flag Day, at least in this country.  Wikipedia devotes two tiny paragraphs to its Flag Day article, beginning with the words, “A flag day is a flag-related holiday…” (promising start, no?)  But at least they go on to say, “…a day designated for flying a certain flag…”, and, “…a day set aside to celebrate a nation’s adoption of its flag.”  Here in America, we do neither on June 14th.

Apologies to Troy, NY (whose Flag Day parades draws 50,000+ spectators) and Waubeka, WI (which claims to be the founding city of Flag Day and also has a parade).  The residents of those towns surely had a “banner celebration” last Friday.  The employees of the Betsy Ross House in Philadelphia probably took the day off as well.  But for the rest of us, it was just another June 14th, conspicuously calendared halfway between big-boy holidays “Memorial” and “Independence”.

Don’t get me wrong – I think America’s flag is supremely appreciated.  She flies above any government facility, sports stadium, or other big-time gathering in our country, and she always gets the highest position on the pole (except you, Texas).  She shows up on a billion first-class postage stamps.  She’s decorates the top of Mt. Everest and the moon.  And on Independence Day, she’ll be raised more times than any other day.  Which makes Flag Day seem, well, redundant, doesn’t it? 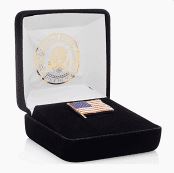 If we’re to truly embrace this overlooked holiday in America, I suggest the following from now on: 1) Your June 14th breakfast must contain some combination of red, white, and blue foods (i.e. cherries, blueberries, Pop-Tarts in a pinch).  2) Your June 14th outfit must contain the colors of the American flag (or at least one of those classy little lapel pins).  3) Unfurl and raise the flag at your house or place of business – and won’t it be cool to add “unfurl” to your vocabulary for a day?  4) Hail a cab or a friend, so you can say you “flagged them down”.  Actually, disregard that last one.

I’ll grant one exception to my efforts to boost the significance of Flag Day.  If you happen to live on a flag lot, you don’t have to do anything at all.  You’re celebrating by default!  But you might consider coloring your property appropriately.  Wouldn’t that cause a stir in the plane flying overhead?

Look forward, not back.  Independence Day is only two weeks from today.  Dust off your flag after all.