A paper towel, a napkin, and a facial tissue were chatting at a paper goods party one day. The towel spread himself flat and declared, “I’m the biggest one here, not counting the tablecloth under the dessert buffet.” The napkin glared at the towel and said, “Think you’re so important? All you do is clean up messes. I’m part of every place setting at every dinner table in the land!” To which the tissue sniffled, “Sorry boys, but I’m more important than either of you. No bathroom or lady’s purse would be complete without me”. Just then a roll of toilet paper wheeled by. Glancing at his paper pals, he grinned confidently as if to say, “No contest”.

It’s true, isn’t it?  If I dragged you to the same paper goods party and said, “Choose one, but it’s the only one you’re allowed for the next twenty-four hours”, toilet paper wins every time.  Paper towels, napkins, and facial tissue come in plenty of sizes, quantities, and pretty designs, encouraging us to put them on display in our houses.  TP gets no such fanfare and frankly, we’re embarrassed to be seen anywhere with those virgin-white rolls.  When was the last time you proudly displayed your 24-pack of Quilted Northern or Angel Soft as you waited in the grocery store checkout line?  If you’re like me, you jam those rolls into the lower part of the cart.  You want them invisible.

Here’s where you’re probably thinking, “Toilet paper?  He’s writing a blog about toilet paper?”  Damn right I am.  When Procter & Gamble (P&G) comes out with a “bathroom tissue” product called “Charmin Forever Roll”, I’m all over it.  Imagine if you will, a roll of toilet paper one foot in diameter (actually, don’t imagine; just look at the photo below).  This bad boy’s three times bigger than your standard roll.  He’s the equivalent of the 24-pack you were trying to hide in your shopping cart.  It’s like putting a tractor tire next to your toilet.  The “Forever” comes with its own sturdy stand, and the idea is, it never runs out.  Well, almost never.  The Forever lasts twenty-one days on average.  If you told me my job was to change the toilet paper roll only once every three weeks?  I might actually do it!

What, you ask, inspired P&G to create a quarter mile of rolled toilet paper the size of an LP vinyl record?  Human nature, that’s what.  No matter how easy the task, people refuse to change the roll (on top of whatever else they’re doing in the bathroom).  In fact, a survey of 2,000 bathroom users – as if the survey-takers had to screen out “non-bathroom users” – found 85% agreed to the phrase, “An empty toilet paper roll is one of the most frustrating bathroom scenarios”.

You should’ve seen this coming and beaten P&G to the punch.  Toilet paper has been rolling out in ever-bigger sizes since those 4″ originals hit the shelves.  We’ve graduated to “double”, “triple”, “jumbo”, “mega”, “mega plus”, and “super mega”.  It’s getting grandiose.  Even the Forever isn’t the biggest anymore.  Last month Charmin debuted the “Forever Roll XL”, which gets you 50% more than the Forever.  You can go a whole month without changing the roll.  Not only that, P&G lets you subscribe, so your XL tractor tires show up at the front door all by themselves.  Order a dozen and you’re good for a year! 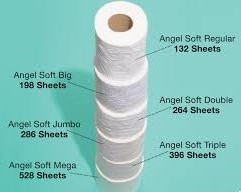 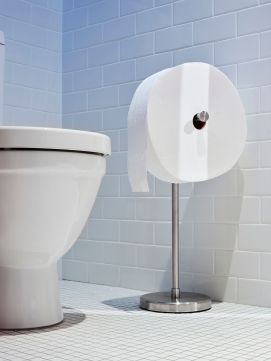 Clearly, the sky’s the limit when it comes to a roll of toilet paper.  I can picture it now: a roll the size of a Ferris Wheel.  Laugh all you want – homebuilders are probably already redesigning bathrooms to accommodate one.  And then – maybe then – toilet paper will get more attention than just who was supposed to change the empty roll.