Every now and then I come up with a topic for my blog, and then the topic somehow surfaces in the natural course of conversation later the same week. It’s a little unnerving – perhaps divine intervention – to watch someone bring up something you hadn’t thought about in years, or at least until a few days earlier.

Such was the case this week when I opted for a (virtual) visit to Mont Saint-Michel, the majestic island commune and fortified abbey just off the coast of Normandy, France. Mont Saint-Michel came to mind because I received a mailer from my alma mater advertising a ten-day trip to the region next summer. The itinerary includes a stopover in Paris, a base hotel in the historic seaport village of Honfleur, extensive tours of Normandy focusing on the events of World War II, and finally, a full day exploring the island of “St. Michael’s Mount.” Mon dieu, what an adventure!

Mont Saint-Michel has a remarkable history on top of its dramatic architectural elements (which you can read about here).  Its buildings date to the 8th century, with the Romanesque abbey and monastery at the very top (“closest to God”), literally supported by a vast network of halls for stores and housing, and finished elegantly at the bottom – outside the walls – with individual houses for the handful of fishermen and farmers who live there.  The church inside the abbey is partnered with an open-air cloister (a square covered walkway for reflection).  A statue of the archangel Michael watches over the land from the very top of the church spire.  Magnifique, no?

Here’s an interesting bit of trivia about Mont Saint-Michel.  You may think the following photo is a distant view of the island.  Au contraire.  The Mont has a “sister” across the channel near Cornwall.  England’s island of “St. Michael’s Mount” is much smaller, but it still shares the characteristics of Mont Saint-Michel, including the significant rise/fall of the surrounding tides, the conical shape of the island, and a chapel at the top. 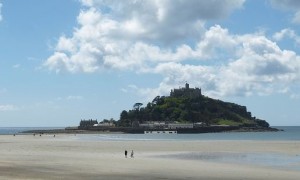 In today’s world Mont Saint-Michel is a little touristy for my tastes, so perhaps it’s just as well I’ve never made the pilgrimage.  2.5 million visitors descend upon the island every year, hosted by only 25 full-time inhabitants (monks, nuns, and shopkeepers).  Tourism is literally the only source of income.  Besides a walk through the abbey and the spiraling streets, you’re channeled into the requisite shopping area, for food (including the famous to-go omelettes), and for purchases that can only be labelled as “tacky”. I actually have one of these souvenirs (below photo). Sacre’ bleu!  Maybe if they’d left off the sailboat… 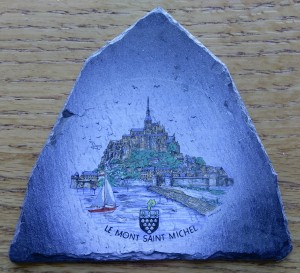 To further detract from the mystique of the Mont Saint-Michel, a permanent walking bridge was built three years ago, allowing round-the-clock access from the mainland car-park.  Once upon a time you had to wait until low tide and then quickly walk across the natural spit of land before the water returned.  Now you just cross whenever you want.  Too bad, but apparently the channel was filling in with silt and a bridge was the only way to keep the island an island.  C’est la vie.

My first introduction to Mont Saint-Michel was forty-odd years ago on the shores of California, not France.  San Diego County hosts elaborate sand-castle building competitions on its beaches, and one year I snapped the following photo of the winner. 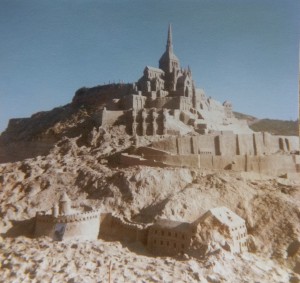 To visit Mont Saint-Michel, you’ll need to drive four hours to the west of Paris, all the way to the coast of the English Channel.  Unless you have a hankering for WWII history, there isn’t much else to draw you to the region.  Which brings me back to the start, and my comment about topics resurfacing later in the week.  Three days after I wrote this post, I was having a beer with some older friends and we got talking about the movie “Saving Private Ryan”.  One of the guys said his dad served in WWII and he’d taken him back to the beaches of Normandy, where he’d spent part of his time as a medic.  “Normandy?”, I said.  “Yes”, he said. “You know, in the northwest of France near Mont Saint-Michel?” To which I almost said, “excusez-moi?”