“Survivor” is reality TV’s longest-running program. “Survivor” is also my new middle name after a vicious three-day juice cleanse last weekend. For my pre-cleanse (sane) state of mind, refer to last week’s Getting My Juice On. For my current (questionable) state of mind, proceed with caution. The words that follow may be the equivalent of the movie scene you wish you never saw; the one still burned into your brain.

The quick recap: my daughter recently coerced my wife and I into trying Pressed Juicery, a hard-core player in the world of retail cold-pressed juice products. PJ offers gentle confections like coconut water with cinnamon, but for the truly gullible (me), they suggest a “cleanse”, where you down 336 ounces of liquid in three days (assuming you include the recommended twenty-four glasses of water). In those torturous seventy-two hours you get nothing else on the menu – no snacks, no bars; no solid food whatsoever. It’s just bottle after bottle of sickly-green liquefied vegetables (with an occasional fruit thrown in, which might as well be a lamb tossed into a pride of lions).

Considering I knew everything in the above paragraph before I took the first sip labels me as some kind of (raving lunatic)? But add my daughter to the equation and my voice goes rogue with, “sounds great, honey!”. Thus last Friday morning at zero-eight-thirty, I took my first sip of the PJ Kool-Aid. Let’s set the table with the scrumptious ingredients. Kale. Cucumber. Romaine. Spinach. Parsley. Lemon. I’d list the rest but I’m about to toss my cookies just thinking about them again (and believe me I’ve had a few cookies since that last fluid ounce).

In the beginning (this is a tale of biblical proportions), I assumed remarkable confidence staring down Cleanse Bottle #1. I consumed its contents in two or three gulps. Not so bad, I thought. Utterly vegetable with a sickly fungal aftertaste, but nothing a glass of water wouldn’t kill. But two hours later (which is a short 120 minutes on a juice cleanse), Bottle #2 came a-calling. This time I’m not so fast. It takes me a good half-hour to drain the contents. Now I’ve got thirty-two ounces of liquified vegetables in my system, which PJ claims is eight pounds of the real produce. That’s rough(age) on a body, and the body doth protest. After Bottle #3 the burps started. After Bottle #4 I enjoyed the occasional dry heave. By Bottle #5 I was asking for Mommy so I could tell her I didn’t want to do this anymore.

Unbeknownst to me (remember, I am gullible), I had created the perfect storm of stomach acids and vegetable puree deep down in my digestive system. Perhaps that’s why Bottle #6 is all almond milk and vanilla. It’s like dumping two cups of Pepto-Bismol over the whole mess (“Coats!” “Soothes!”). Okay fine, but try sleeping on that stomach. Your dreams are technicolor and downright scary.

Somewhere during Day 2, I looked in the mirror and saw a cucumber with a tomato head and broccoli-stalk arms. I stifled a scream. I put my hands on my hips and tried a “Ho-Ho-Ho” to see if I should audition for those Jolly Green Giant commercials. But there’s no time for auditions when a bottle beckons every two hours. Furthermore, deep into a juice cleanse you stop stop tasting the vegetables. That is, even when you’re not drinking, you’re tasting the green. Every gulp of air is tainted with chlorophyll. No breath mint is strong enough to conquer the stench. It’s like somebody threw your backyard garden into a giant blender, then filled your swimming pool with the resulting green muck, then threw YOU into the deep end. You’re six feet under in vegetable quicksand.

Enough of the madness – let’s cut to the merciful end of my story. Somehow I burped and lurched Day 3 away.  On Day 4, the clouds cleared, the sun rose, and I awoke to the promise of solid food. Bless my soul – a full-course breakfast awaited me. No longer would I spend as much time in the bathroom as I would in the free world. Life was good again. Or so I thought. As PJ smartly warns you, one cannot just return to normal eating/drinking immediately after a juice cleanse. One must slowly reintroduce the finer things in life. Choose carefully. Chew slowly. Limit thy portions. Rome was not built in a day.

Would I recommend a juice cleanse? No. (unless you’re gullible – then you don’t have a prayer anyway). Do I feel healthier after my three days in the garden? No, but I feel different, as if a vegetable alien is growing inside my stomach and may someday rip its way out.  Do I have any advice after the fact?  Yes. Damn, I could’ve had a V-8!

My daughter has a knack for making me do things I wouldn’t choose to do myself. Perhaps it’s because she was unexpected at birth (I came from a family of five boys and already had two sons of my own). Perhaps because as a kid, she could scrunch up her face and use her best sweet-little-girl voice whenever she wanted something. Maybe it really began by relenting to little Girl Scouts and their boxes of cookies at my front door.  Whatever the reason, my daughter still finds a way, even as an adult in her mid-twenties.  And that is why I’m commencing a three-day juice cleanse tomorrow morning.

Cleanse. The word scares me a little. I think of those whirly scrubbing-bubble characters on TV, dashing around the bathtub disinfecting away soap scum.  Or I think about SOS pads and their steel-wool grittiness.  Is this simply a short-term liquid diet, or am I on the verge of a full-on purge?

My box-o-cleanse arrived last night; a liquid-brick wrapped carefully inside a foil space blanket. I opened the container to find twenty-four intimidating 16 oz. bottles staring up at me. I swear they were grinning. They looked like they couldn’t wait to get out of their box, sprout their scouring brushes, and commence the cleaning. Each bottle contains a different colored concoction, labeled rather impersonally.  Greens 3.  Roots 1.  Citrus 2.  I’ll drink one of these little guys every two hours in the waking hours of the next three days, chasing their green goop with a similarly-sized bottle of “Chlorophyll” water or “Aloe-Vera” water. Chlorophyll? Aloe Vera?  I feel like a plant already.

I can’t claim to be surprised by the contents of my box-o-cleanse. Just last week I visited one of the labs – er, retail outlets – for a sample of these products. Pressed Juicery, with locations close to the coasts and Hawaii, sells cold-pressed, 100% fruit & vegetable concoctions; all ingredients non-GMO. I tried one of their delicious coconut-cinnamon drinks… and that was my mistake. P.J. lures you in with mild, decent-tasting options like coconut and cinnamon. Then they gently suggest you consider a cleanse.  My daughter wanted to try one, and I was only too happy to foot the bill (these drinks ain’t cheap).  I figured Colorado was a safe distance from the cleansing craze, so my only involvement would be with my wallet. Wrong-o. P.J. is happy to overnight their products to just about anywhere.  Thus my twenty-four cleanse bottles mock at me today, anticipating tomorrow’s cleaning kick-off.

If I stepped back and gave Pressed Juicery a hard look, I might have used my better judgement, turned, and fled.  The retail outlets abound with stark-white surfaces and plate glass.  The employees dress in uniforms intimidating enough to double as lab coats.  The products emerge from a dark, back wall refrigerator, pre-assembled and ready to consume.  For some reason “drinking the Kool-Aid” just came to mind.  Gulp. 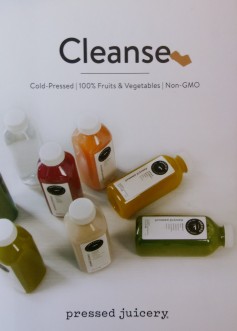 P.J. describes their juice cleanses with a selection of unnerving words. Reboot. Fresh Start. Body Do-Over. Cue a bout of mild nausea. Am I going to be more intimidated by a) the taste of “four pounds of fresh produce in every juice” or b) what those four pounds will do to my insides? Will my body a) turn green and sprout shirt-ripping muscles like “The Incredible Hulk”, or b) reduce to a puddle (think “Wicked Witch of the West”) through non-stop visits to the toilet? 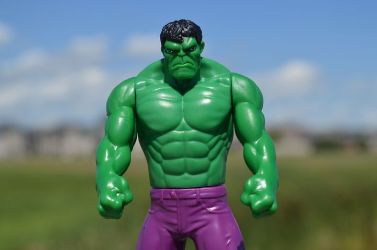 My daughter is already halfway through her own three-day P.J. cleanse.  She claims she’s never hungry, feels really healthy, and only misses “the act of chewing”.  But she also admits to gagging trying to get a bottle of “Roots 2” down (she recommends shot-glassfuls).

If I’m still around next week, you can count on a post-cleanse blog report.  If I’m not, Lord help me for never saying no to my daughter’s ideas.