With Chinese New Year and Mardi Gras celebrations going on this month, you can bet the decibel levels around the world are higher than normal.  Orbit the globe and all you’d have to do is step outside your rocket to catch the sounds of fireworks and blasting dance music.  In this “Year of the Pig”, I find it funny my zodiac animal is the ox.  By Chinese definition I’m “hardworking, intelligent, and reliable”.  But forget about my “oxen” qualities for now.  Today I want to explore my alter-identity as a dolphin.

(Work with me a little, okay? Don’t dump me at Sea World or a performance of “The Little Mermaid”; just hear me out.  My dolphin identity has more legs than my ox.) 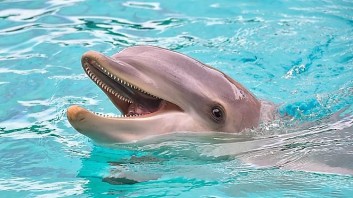 First, a question.  How’s your sleep these days (er, these nights)?  Getting your 7-8 hours, are you?  Do you hit the pillow at night and next thing you know it’s sunshine and chirping birds?  Do you wake refreshed and ready to tackle the day? If it’s “yes” to every question, you and your body clock are finely tuned.  To spin it with science, you “respect your circadian rhythms”.  But here’s where it gets interesting.  Body clocks aren’t wound the same way person to person, nor are they set to the same time.  One size most definitely does not fit all.  We are Timexes, Seikos, Bulovas, and Rolexes.  So which chronotype are you?

Chrono-what, you say?  If I steered this post towards a biology lesson, you’d start nodding off right about now (not the way to treat your body clock).  Instead, let’s keep it simple.  Chronotype is essentially your preference for waking early or sleeping in.  We all have a degree of one or the other, and we’ve had it since birth.

Let’s find out more about the “animal” within.  Take the following test from Dr. Michael Breus (“America’s Sleep Doctor!”) – thepowerofwhenquiz.com – and less than a minute from now you’ll know your chronotype.  You’ll also understand more about your propensity for sleep.  No question – I hesitated when I came up dolphin (c’mon, Dr. Breus – I could’ve been a lion, a bear, or a wolf!), but admittedly the description is spot-on.  I’m a light sleeper.  Naps don’t help me.  Attention to detail impacts my productivity (and my sleep).  I hit the sack at the same time every night and wake up at the same time every morning.  That’s me.  And that’s the dolphin chronotype.

[Note: the Breus test wants your email to get your animal.  Do it, and then unsubscribe.  Otherwise the good doctor spams your inbox with books, courses, supplements, and other stuff.  You just want your animal.]

To test the validity of chronotypes, I took the Breus test again… posing as my wife.  If my answers for her were correct, she’s a bear (the most common chronotype).  She’s not a light sleeper (Mardi Gras could be booming down the hall and she wouldn’t hear a thing).  She works hard in the day, relaxes at night, and often goes to bed later than I do.  She can sleep later into the morning if she so chooses.  She needs a couple of hours to be fully alert after she rises.  That’s my wife.  And that’s the bear chronotype.

Unfortunately, chronotypes are not as dependable as they sound.  For one, they shift as we age.  For two, they can’t always be respected (i.e. jobs and lifestyle drive us off our body clocks).  Finally, sleep is influenced by myriad factors having nothing to do with chronotypes (i.e. diet and exercise; light levels and sound levels; your dog, who always insists on going out at 3am.)  But chronotypes are built into your DNA, so it behooves you to get to know them a little better.

One last wink of sleep trivia before we part.  You know those nights when you wake up unexpectedly, and you feel completely, utterly out of it?  Like, you can’t even see straight, let alone carry a conscious thought – as if you haven’t slept at all?  That moment is called your circadian nadir; when your drive for wakefulness is at its lowest point.  It happens about two hours before your natural wake-up time.  For me – a dolphin – it’s not as disorienting a moment as most.  But I still feel pretty out of it.  After all, I’ve been sleeping with the fishes.

Some content sourced from the Wall Street Journal article, “Can a Night Owl Become a Morning Person?”