Several times during the recent year-end holidays, I passed through the drive-thru at Starbucks, and as I paid, I asked the cashier to include the purchases of the car behind me. I’ve been participating in this Starbucks-wide trend for several Christmases now, and it brings me an inexplicable feeling of goodwill and satisfaction.  The goal of the effort is anonymity. Or to put it more comprehensively, blind faith.

Blind faith is defined as “belief without true understanding, perception, or discrimination”.  That’s powerful.  “Faith” is a spectrum that starts with basic trust and ends with the highest forms of religion.  But add on “blind” and it elevates the meaning.

Buying a free cup of coffee at Starbucks is the easiest form of blind faith, like handing over a dollar to a beggar.  No judgment as to “what happens next” allowed.  But the intention behind an act of blind faith is worth a bit of exploring here.  Dissecting my Starbucks gesture, I note the key components.  First, I don’t waffle over the amount of the purchase I’m covering.  That’s the blind faith in choosing to pay in the first place – it shouldn’t matter how much.  One time I looked in the rear-view mirror and saw a car with four passengers.  Their bill was well over $20.  But my decision had been made before the car even pulled up behind me, so the point was to stick with it.  Another time my recipient was a well-dressed woman wearing sunglasses and driving a recent-model BMW.  Again, no judgment.  Pay for her coffee and move on. 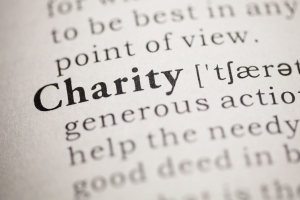 The second component concerns my “getaway”.  As I’m waiting for my own purchases I’m considering my escape route – the path that gets me away from Starbucks as quickly as possible, with enough turns and traffic lights to deter my beneficiary.  My goal is to remain anonymous, and unless the person behind me memorizes my license plates (or something else unique about my vehicle), I’ve achieved a moment of goodwill and will never see them again.  Frankly, it would spoil the whole effort if the car pulled up next to me at a nearby red light.  They might offer their gratitude, or they might offer to pay me back.  They might even be annoyed, as if I had no business intruding on their “personal life”.  I’d rather not know.  I prefer to lean on blind faith that I brought an unexpected smile, or delivered a tiny give-me-a-break in an otherwise trying day.  Maybe they’ll even “pay it forward”, as a string of 374 consecutive cars did at a Starbucks in Florida back in 2014.

Come to think of it, there’s a third component in the Great Coffee Giveaway.  Never expect the gesture in return.  In the countless times I’ve driven through Starbucks during the holidays, I’ve never thought to myself, “I hope the car in front of me picks up the tab”.  If I knew this was happening, I might just order a half-dozen breakfast sandwiches and several cake-pops to go with my Flat White.  Just kidding, of course.  I hope the thought never crosses my mind.

This week and last – no surprise here – I’ve read dozens of blogs about resolutions for the New Year.  Allow me to contribute my one-and-only.  I’m going to lean on blind faith in the coming year, whenever I have the chance to give someone a break.  Remember the rules: 1) No conditions on the amount (read: cost) of the help.  2) Keep it anonymous, as a) recognition defeats the spirit, and b) giving simply for the sake of giving might inspire “pay it forward”.  3) Don’t expect a similar gesture in return.  That’s not to say you won’t be pleasantly surprised when someone buys your Starbucks coffee one of these days.  You’ll just know there were no hidden agendas.