Three years ago, New York Magazine’s website Vulture ranked all forty-five Peanuts animated television specials from worst to best, including a paragraph on each one to justify its ranking. I wouldn’t have guessed Charlie Brown, Linus, and Lucy appeared in fifteen television specials let alone forty-five. But let’s be honest; only two Peanuts adventures have had any staying power: It’s the Great Pumpkin, Charlie Brown (#2 on Vulture’s list), and A Charlie Brown Christmas (#1). 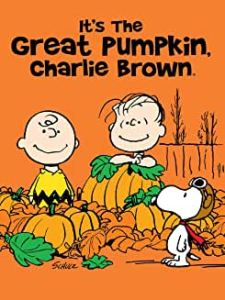 Maybe I’ll weigh in on the Christmas special in a couple of months, but with Halloween on the horizon I need to speak to the runner-up. It’s the Great Pumpkin, Charlie Brown first aired on television in 1966, so those who were alive back then (me) have the chance to see it for the 56th time this year. But maybe not? The networks stopped showing Great Pumpkin two years ago.  Other than PBS in select locations, you’ll have to buy the DVD or subscribe to Apple TV+ to watch Charlie Brown get another rock in his trick-or-treat bag.

Writing about a Peanuts special dates me – there’s no question.  But it’s still worth the words.  The Peanuts gang was the comic strip of my youth.  I remember the anticipation of the Sunday morning newspaper and the “funnies” pages.  Charles M. Schulz and his Peanuts characters always got the first slot.  When the specials debuted in the mid-60s, it was a big deal.  It’s the Great Pumpkin, Charlie Brown only showed up once a year, in mid-October.  We didn’t have DVRs (let alone streaming) back then, so watch it live or you’d miss it.  Peanuts specials were always the hot topic of conversation at grade school the next day.

After so many watches, Great Pumpkin becomes an interesting study.  You pick up on the little things, the ones which would implode under the weight of today’s social media scrutiny.  Right out of the credits, Linus & Lucy head to a patch to pick out a pumpkin.  On the way, Linus picks up an apple among the fallen leaves, takes a single bite, and tosses it into a trash can. (Unnecessary waste!).  In another scene, Lucy stabs a pumpkin with a giant knife as she begins carving (Children with weapons!).  Then Linus looks on in horror and says, “I didn’t realize you were going to kill it!” (Violence!)

Great Pumpkin touches on other themes to sink today’s children’s shows, including bullying, teasing, and casual use of words like “stupid” and “blockhead”.  Charlie Brown is the butt of several jokes, including Lucy pulling the football away just as he tries to kick, and the girls using the back of his head to draw a pumpkin carving design.  Yes, I laughed at these scenes when I was a kid, but only because I wasn’t that kid (and because it was the 1960s humor).

Here’s an oddity with Great Pumpkin.  You’d think a short animation would be a continuous story.  Not so.  Great Pumpkin jumps awkwardly between disconnected scenes, from carving pumpkins to trick-or-treating to a Halloween Party.  The middle minutes shift randomly to Snoopy acting out his costumed “World War I Flying Ace” in the middle of France.  It’s as if Great Pumpkin didn’t have enough Halloween material to fill a half-hour, or at least needed an excuse to include Snoopy in the story.

Finally, “the Great Pumpkin” itself is completely akin to Santa Claus, but for a different holiday.  Linus writes a letter to the Great Pumpkin to say he’s looking forward to the arrival on Halloween night and hoping for lots of presents.  The Great Pumpkin visits pumpkin patches the way Santa Claus visits houses.  There’s even a mention of “pumpkin carols”.  You’re left wondering why this figment of Linus’ imagination wasn’t a little more unique.

If you haven’t watched It’s the Great Pumpkin, Charlie Brown, I probably haven’t given you reasons to rush to your television.  It’s simple and disjointed, and the animation doesn’t win the show any awards (even in the 1960s).  But just like A Charlie Brown Christmas, the characters are endearing, and the story has a pretty good message.  I’ll probably find myself looking for it again next year.

Travel-Gourmand.com
just drive, will you?

my life. what have I got to chauffeur it?