A little south and a little west of our downtown proper, you’ll find a wide street with stately old homes. The homes sit to the back of their properties, playing second fiddle to lines of majestic oak trees closer to the street. Overhead, the tree branches are densely intertwined, barely allowing the sun to peek through, creating a cozy, comforting canopy as you drive through. It’s a look that could’ve inspired the design of Thorncrown Chapel in Eureka Springs, Arkansas.

When I gushed about Fallingwater in last week’s Perfect Harmony, I thought it would be appropriate to revisit some of my favorite American architecture as I share the adventure of my LEGO model build.  Were it not for my architecture degree in college I probably wouldn’t be aware of these beautiful structures.  Instead, all these years later I can recall my favorites from memory.  They’re a diverse bunch but I think they exemplify almost-perfect spaces, thanks to the work of the architect behind the scenes.

Thorncrown Chapel is an appropriate choice to lead off my list.  Just like Fallingwater, the chapel’s intent is to bring the outside in so that worship (or weddings, or any other celebration) feels as if you’re one with nature, yet with the conveniences and comfort of an enclosed space.  Thorncrown was built in 1980 (by coincidence, my freshman year of college).  Its architect, E. Fay Jones, turned a childhood interest in treehouses into a decorated career, including an apprenticeship under Frank Lloyd Wright.  Fay Jones’ designs “focused primarily on the intimate rather than the grandiose“.  Hence, chapels.

As a disciple of Wright (and the only one to win the American Institute of Architect’s [AIA] prestigious Gold Medal), it’s no surprise Fay Jones’ Thorncrown Chapel design is reminiscent of Wright’s Prairie School houses, with its broad overhanging eaves, horizontal lines,  and deliberate integration with the landscape.  Thorncrown contains 425 individual windows.  Those with stained glass bring in so much colored light the chapel’s interior is often described as “jewel-like”.

As with Fallingwater, Thorncrown is constructed of organic materials, including Southern pine and flagstone from the surrounding area.  The chapel seats 100 and is non-denominational, intended more for meditation for those who make the pilgrimage to Eureka Springs (in other words, go see it!)  For all of the beautiful structures you’ll find in America over the last forty years, the AIA has given Thorncrown the distinction of “best American building constructed since 1980”.

Despite my longtime familiarity with Thorncrown, I never thought to wonder how it got its name.  Turns out, Thorncrown’s design was not only inspired by Frank Lloyd Wright but also by Sainte-Chapelle, the Gothic church in Paris, France.  And at some point in its history, Sainte-Chapelle supposedly housed the crown of thorns worn by Jesus Christ.

If your wanderings ever bring you to the northwest corner of Arkansas, take time to visit this crowned jewel of a chapel.  Whether it strikes you as a treehouse or a miniature cathedral, being in church will never feel so comforting and cozy.

Now then, let’s turn our attention to (LEGO) Fallingwater, shall we? 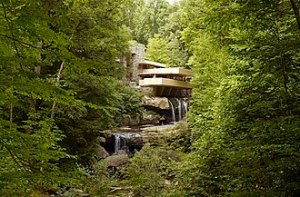 As with the LEGO Grand Piano, the first step in the build is to simply open the box and assess the contents.  Here’s what is immediately apparent about the LEGO Fallingwater model:

If you’ve ever been to an IKEA home furnishings store, you know the shopping experience is more about navigating a vast warehouse than a cozy “store”.  IKEA retail covers several football fields worth of showrooms and merchandise, with clever navigation arrows projected onto the floor so you don’t lose yourself in the maze.  Before or after your purchases, IKEA offers a spacious sit-down cafeteria, so you can fuel or restore your energy levels as needed.  And it is here – in the IKEA cafeteria – where I can’t help but picture the Swedish Chef from the The Muppet Show.

You remember Swedish Chef, don’t you?  Even if you only occasionally glanced over the shoulders of your children as they watched The Muppet Show, Swedish Chef left an indelible impression.  Chef had those big, bushy brows completely covering his eyes.  He always had a handful of utensils, inevitably launched into the air of his kitchen as his gibberish songs ended with “… BORK, BORK, BORK!”  Chef sported a colorful bow tie, a white apron, and the distinctive toque blanche (white hat) on his head.  Swedish Chef was always my favorite Muppet.

Chef could be working behind the counter of the IKEA cafeteria, because naturally; IKEA serves Swedish food.  My favorite entree (as if I dine at IKEA regularly) is the Swedish meatballs in brown sauce (köttbullar), served with a side of the crepe-like potato pancakes (raggmunkar) and a dollop of lingonberry jam (Sweden’s famous “food freshener”).

There’s another fellow in the States who reminds me of Swedish Chef, and he doesn’t work in the IKEA cafeteria.  Ever heard of Mimal, “the Man in the Middle of the USA”?  Mimal lives in the Midwestern states, and he’s a big boy.  In fact, Mimal’s so big he barely fits between Canada’s border to the north and Mexico’s to the south.

Have a look at the map.  Mimal (sometimes called “the Elf”) is a silhouette of a chef, represented by the outlines of seven American states.  MIMAL is quite literally (M)innesota, (I)owa, (M)issouri, (A)rkansas, and (L)ouisiana.  He holds a pan (Tennessee) of fried chicken (perfectly represented by Kentucky).  Mimal can thank the west bank of the Mississippi River for the shape of his five-state body.  He also looks like he’s about to march his chicken right off the map, over the Atlantic Ocean, and on into Europe.  Maybe he’s headed to Sweden?

Whoever discovered Mimal hiding in America came up with a clever way for children to memorize a handful of states.  Appropriately, Mimal the chef is made up of a baker’s half-dozen of them.  A baker’s dozen (13) began in the 11th century, when an extra loaf was added to the bread basket to guarantee the minimum sales weight.  A baker’s half-dozen then – rounded-up – is seven loaves.  Or seven American states.

Leave it to Americans to deny Mimal his innocence.  Based on one or more unsolved mysteries in the MIMAL states, the elf-chef was once connected with a real-life kidnapper/murderer.  The legend claimed if you drove straight from Minnesota to Louisiana – through each of Mimal’s five “body” states, you’d be abducted (never to be seen again) once you crossed Louisiana’s northern border.  My logical brain asks how said abductor knows you made it through all five states?  But this is legend we’re talking about, much like the monster in Scotland’s Loch Ness.  Tabloid fodder at best.

Educators expanded on Mimal’s seven-state profile, including all fifty American states in a story designed to help students memorize names and locations (would’ve been helpful back in my school days, when I’d confuse Wyoming with Colorado).  Still, I prefer to limit the game to Mimal’s baker’s half-dozen.  I can’t help but see a big chef every time I look at a map of the United States.  I also can’t help hearing him sing, “…BORK, BORK, BORK!”

Some content sourced from Wikipedia, “the free encyclopedia”, and the Laughing Squid blog.