Words get stuck in my head – often.  If I hear “cattywampus” or “chartreuse” or “onomatopoeia” (and for the record, spellcheck didn’t flag any of them) my brain hangs on for a while because I’m entertained by the sound or the meaning. Sometimes a word repeats so often in my mind it doesn’t sound right anymore, like putting the accent on the wrong syll-AH-ble. But this is the reason I never struggle to include a unique word in every Life In A Word post. It’s the reason my topics often become unexpected adventures in writing – several hundred words spun from the single word ricocheting around in my brain. So what word am I stuck on this week, you ask? Make.

I know, I know.  You expected a more sophisticated word; something you could really sink your teeth into.  Certainly a word with more than four letters.  But here’s the thing.  Some words have one meaning while others have a list of definitions a mile long.  “Make” is wonderfully (sometimes confusingly) versatile.  It seems to have limitless uses. So, while “make” shows up in, like, every other conversation we have, consider just how many different ways we’re using it.

Here’s an example, probably my favorite for today’s topic.  We contracted with a bakery in Denver to create the perfect cake for my daughter’s upcoming wedding.  You call them first to make a sit-down appointment (yes, I’m aware I just used our word-of-the-day).  Then you work with a consultant on sketch paper to design exactly what you’re looking for. Then you taste-test six cakes and six frostings (using a tray of cupcakes) to come up with your dream combination.  The name of this establishment?  The Makery.  At first I thought it was a strange name, but then I realized, no; it’s a cool, tidy spin on words.  The Makery is not just a bakery.  A bakery would fill their glass display case with creations for you to choose from.  The Makery is all about custom creations, based on your input and your preferences.  In other words, The Makery declares “baking” a subset of “making”.

Without peeking at your Webster, guess how many definitions you’ll find for “make” in the dictionary.  Five? Ten? Two dozen? How about fifty-six? “Make” has forty-seven definitions as a verb and another nine as a noun.  I told you “make” was versatile, didn’t I?

I’m not about to go through fifty-six definitions of “make” because you can make better use of your time.  But here are my favorites:

Make Love, Not War” was a slogan born out of protests over America’s involvement in the Vietnam War but it’s probably getting renewed use in the last couple of months.  Not that I can explain what “make love” really means.  Something physical?  Metaphysical?  Peace treaties?  Making out? I can’t make up my mind (and don’t make me).  Besides, it’s time I make for the exits with this post.

(Read about how this project got started in Let’s Make Music!)

Today’s section of the Lego symphony was a ten-minute sprint.  Bag #20 – of 21 bags of pieces – assembled nothing more than the underlying support structure of the piano lid, with hinges to anchor it in place on the left side of the instrument. The dark, raised bar you see running across the top of the lid is part of that structure.  The support “stick” to the right was already there, lying quietly across the piano strings from a previous build, just waiting to be raised. 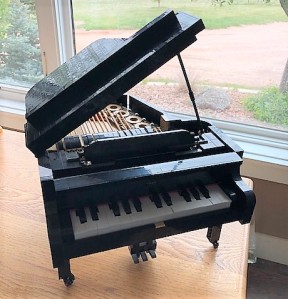 Bag #21 will be a rapid final chapter, perhaps as fast as this one.  We only have the free-standing bench for the pianist to go, and (with a final flourish), the sheet music we’ll center on the stand above the keys.  We’ll bring the entire assembly to the finish line inside of fourteen hours. Then you and I will step back, admire all that we’ve accomplished these last twenty-one weeks, and take a well-deserved bow.

Next week: the final movement!

Conductor’s Note: Liebestraum means “love dream” in German. This short piano piece could certainly be interpreted that way. It starts out soft and melodious, a soothing lullaby. But it picks up steam in a hurry, building to a crescendo and using the entire keyboard.  It’s a beautiful piece, which is more than I can say for Franz Liszt’s last name.  Every time I say “Liszt” I sound like I have a lisp.  Maybe he did too?