ESPN broadcast college football’s national championship Monday night. As the game moved to lopsided late in the second quarter my mind drifted to details besides the football itself. Hard Rock Stadium in Miami Gardens, FL is a striking facility, especially at night from the vantage point of the Goodyear Blimp. 15,000 football fans spaced randomly into 65,000 seats (thanks, COVID) looks awfully sparse. And speaking of awful(ly), the television commercials… well, let’s just agree college football ain’t the same thing as the Super Bowl, folks.

Super Bowl commercials are more entertaining than the game itself, unlike the advertisement drivel I saw Monday night.  Super Bowl plugs cost $5 million for thirty seconds while Monday night’s spots were six figures at best.  Finally, Super Bowl ads are desperate to be memorable (even if you can’t remember the product itself), which is why you have office pools for “best commercial”.  You’re not gonna have an office pool for what I watched on Monday night.  This was the reverse of the Super Bowl: great football, lousy commercials. 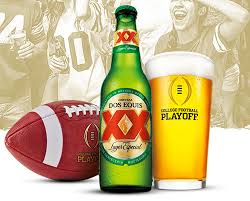 To say Monday night’s commercials paled in comparison to Super Bowl ads is like saying Sprite’s a little clearer than Coke.  These product pushes were awful.  For starters, you had what seemed like five advertisers over a four-hour broadcast.  Dos Equis showed up every fifteen minutes.  Their beer (excuse me, their lager) ads included a closeup of a glassful, with a commentator calling the movement of the bubbles as if they were players on a football field.  Really?  I hope his was a big paycheck.

Then you had AT&T, who seems to be promoting the lovely Milana Vayntrub (as salesperson “Lily”) as much as their products.  Perhaps they’ve watched too many Progressive Insurance ads with Stephanie Courtney (as salesperson “Flo”)?

Finally, ESPN promoted itself.  Normally I’d harp on the host network for advertising some of its own programs even though they paid millions to broadcast the game.  But part of me thinks ESPN really does need the promos.  COVID took a big bite out of sports over the last year, as well as a big bite out of ESPN’s workforce.  When the network brought us Korean baseball and American cornhole competitions I thought, “Okay, the end is near”.

But forget ESPN because I need to be a Davey-downer (i.e., slam) on one more commercial.  I’ve been building to this moment since the first paragraph.  Gatorade just launched it’s first new beverage in twenty years: “Bolt24”.  It’s low-cal and loaded with electrolytes, so naturally the target audience is athletes.  And Gatorade also selected athletes to push its product.  Enter Serena Williams.  She’s one of those athletes I’m on the fence about.  Her athletic skills and accomplishments on the tennis court are unquestionable.  She’s garnered enough championships to earn her place in the tennis player “GOAT” discussion (greatest of all time).

But Serena also has her not-so-role-model moments.  She does not take losing well.  She does not welcome constructive criticism.  Countless broken rackets, lectures (threats?) to chair umpires, and disqualifications would have you wondering if there isn’t a permanent child lurking within the adult.  Wah wah wah.  But the Bolt24 ad was the last straw in my Serena drink.  Why?  Because the tagline goes, “you know you’ve made it when the whole world knows you by one name”.  Oh, so when I say just “Serena advertises Bolt 24”, you knowingly say in response, “oh, her?”

Yeah, I get the pitch.  Bolt24 is a one-word drink.  Serena Williams is almost the only Serena I can think of (besides Serena van der Woodsen, the entitled main character of the TV series Gossip Girl).  But I just can’t buy into the loftiness of the catchphrase.  Get the world to recognize you by first name only and “you’ve made it”?  Sting. Madonna. Cher. Bono. Enya.  See the pattern?  It’s an actor/singer thing.  Also, an athlete thing.  Lebron. Tiger. O.J. (Maybe that last one should just be “Juice”?)

Okay then, shutting down my rant now.  Holier-than-thou personas don’t deserve any more press.  I like to keep “Life in a Word” positive; simple; modest.  Like me.  You know… Dave.