Checked the tires lately? No, no, no – not the air pressure – the treads. Take a good look the next time you grab the car keys. Besides pebbles in the grooves or nicks in the rubber, your tires might sport a bright swipe of yellow on the sidewall. That, my friends, is the calling card of the local police, tracking your parking habits.  You could say you’re a “marked man”.  But sadly – at least for me – the time has come for that chalk to go back to just being rock. 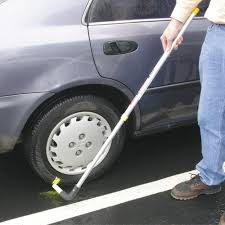 The Sixth Circuit U.S. Court of Appeals sits in Cincinnati, with a jurisdiction of Michigan, Ohio, Kentucky, and Tennessee.  Recently, a disgruntled Michiganite, possessor of fifteen parking tickets in three years (all issued by the same enforcement officer – creepy), decided she’d had enough and filed suit.  Just this week, the Sixth decided yes, in fact; chalking tires is unconstitutional.  By definition, chalking is somehow “a search of personal property”.  By ruling of the Sixth, that search is considered unreasonable under the Fourth Amendment.  Whoa.  All because of a little chalk?

I’m trying to decide if “trivial” or “ludicrous” is the better word for this little story (see news article and twelve-page ruling here).  Clearly, I don’t understand the fuss.  Is chalking an invasion of our personal space?  Are we channeling our inner little kid and crying, “don’t touch my stuff”?  Have we arrived at the Land of Ridiculousness, where issuing a parking citation requires a search warrant? 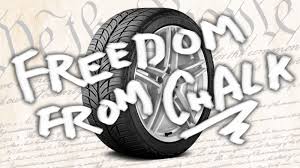 In my Mayberry world, chalking tires is kind of charming.  It’s a mark of a small town.  Perhaps the council didn’t like the look of parking meters.  Perhaps they couldn’t afford them.  Whatever the reason, they released parking enforcement by foot (or bicycle), to cruise up and down the blocks “swiping tires”.  Two hours later, those marks sometimes become parking citations.

College campuses are common ground for chalking tires, so the mixed opinions of students on this week’s ruling came as a surprise.  Some worry new technology (camera shots?  microchips?) will be more intrusive.  Others are simply glad parking enforcement will be hands-off.  Still others will miss the opportunity of “clever” ways to beat the system (a. Spray tires with a non-stick coating.  b. Cover tires completely with chalk.  c. Take tires with you after you park.)

I feel bad for chalk factories.  Parking enforcement was a significant, high-profile use of their product, and now that’s been taken away.  A substance of little more than calcium carbonate just lost some major press.  The rest of chalk’s uses – by comparison – are downright banal.

When was the last time you encountered chalk?  Probably been awhile.  Unless you’re a teacher at the blackboard, a tailor marking clothes, a gymnast, rock-climber, weightlifter, or cuing up a game of pool, it’s safe to say you haven’t used chalk lately.  Unless you’ve sailed in front of the White Cliffs of Dover, you probably haven’t even seen chalk lately. 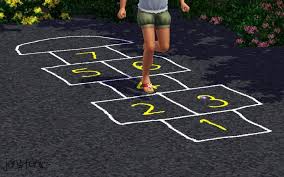 How about chalk memories?  My earliest comes from the playground of my elementary school.  Before the days of painted lines, girls would chalk out hopscotch squares on the asphalt, doing their skips as they collected items from the squares (we boys were too cool for hopscotch).  My favorite chalk memory comes from college, when my engineering professor laid out equations on the blackboard, then turned to talk to the class.  As he spoke, he’d subconsciously hold the chalk aside his nose.  By the end of the lecture his face was fairly covered in chalk dust.

A few weeks ago, my wife and I took a trip to Charleston, SC, and to nearby Folly Beach.  The (now defunct) Morris Island lighthouse stands several hundred yards off the coast.  A mile-long asphalt trail takes you from the parking lot to the beach, as close as you can get to the lighthouse.  That trail is the photo below.  Hundreds of pictures and sayings; bold, colorful sidewalk art.  You literally walk the chalk.

The next time I get a parking ticket (and there will be a next time), I’ll be tempted to check my tires.  No longer.  Instead, I’ll just chalk it up to days-gone-by, when marking tires was simply a good intention, not a violation of the U.S. Constitution.

The blog of author Betsy Kerekes