I could dedicate an entire blog to Americans and their deliberately awful driving habits. Think about the last time an impatient driver just about kissed your rear bumper – practically screaming you over to the slow lane (and how you stayed in the lane anyway just to make ’em madder).  Or how about merging onto a rushing interstate highway, only to be denied by drivers who want to “win” the right lane?  Lately, a new habit takes the checkered flag for most-annoying: drivers sneaking through intersections when the light just turns red.  You know these evaders; the car dashing through after the car sneaking through on the yellow.  For these drivers, it’s time to smile.  Colorado Springs has installed red-light cameras. 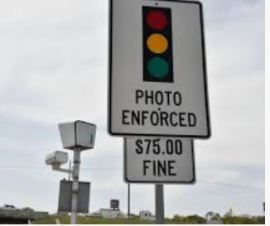 Red-light cameras have been around for years, but our fair city decided it’s finally time for the photo ops.  At two of our busiest intersections, the city just put the finishing touches on the cameras.  For the next thirty days they’ll kind of test the waters; see how much action they get.  No tickets, just photos.  To that I say: forget the thirty-day trial and begin the citations.  Eleven hours after the cameras started snapping last Tuesday, the city had already recorded sixty-two red-light violations.  Sixty-two!  Do the math and you amass 4,000 violations per month.  Do the math again – at $75 per violation – and you bank $300k.  That’s two cameras and only two intersections.

This photo shoot will get fun in a hurry.  After the thirty-day trial the city adds another two cameras at another two intersections, with another thirty-day trial, and so on and so on.  The entire program is easily funded by all those $75 fines.  I don’t know the cost of a red-light camera, but at the rate we’re going we’ll have the entire city camera’d in no time.

My opinion on red-light cameras is hardly below board.  I think they’re a wonderful use of technology.  Not a day goes by where I don’t witness an “extra” car in the intersection.  When it happens, two thoughts come to mind.  First, it’s a miracle we don’t have an accident.  Second, the violator bought into this opportunity long before it happened.  Think about it.  The light turns red at the same time the cross-light turns green.  There should be an accident.  But the red-light violator banks on the delayed reaction of the driver accelerating on the green.  He/she sneaks through before the opposing car really gets going.  It’s a gamble on human lives – every time. 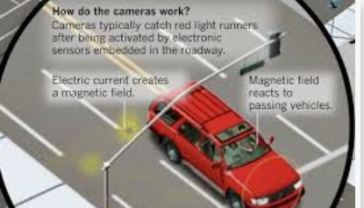 Speaking of the $75 fine, a moving violation is supposed to set you back $150.  Yet getting caught by a red-light camera doesn’t count as “moving”.  Care to explain that?  Aren’t you “moving” as you deliberately break the law?  Regardless, they’re making this program as friendly as possible.  The police review the infraction and the photos in all cases.  You must enter the intersection after the signal turns red to be cited.  You don’t even get points on your driving record.

A few years ago, my son got a ticket from a red-light camera in another city.  He didn’t realize his infraction (or so he claims) until the citation arrived in the mail.  Conveniently, you get a URL for the photos so you can see exactly what happened.  The technology is remarkable; five or six pics, including the license plate on the vehicle (front and rear), a full shot of the vehicle in the intersection while the signal is red, and that smile-for-the-camera shot of the driver.  With photos from all angles, there’s no arguing the infraction.

As if to underscore the need for this program in Colorado Springs, last Friday a driver blew through a red light, collided with two other cars, and sent several people to the hospital with serious injuries.  Just happened to be one of the two intersections where the city installed the cameras.  I’d say they got this right.  I’d also say this program is long overdue.  No more “colorblind driving”, people. Red is red.

2 thoughts on “Smile for the Camera”