A strategic goal of the Federal Trade Commission (FTC) goes as follows: Protect consumers from unfair and deceptive practices in the marketplace. Unfair and deceptive practices seem to be the strategic goals of several other organizations out there, so I’m glad the FTC seeks to “protect” me. For example, they held a competition called the “Robocall Challenge”, looking for solutions to reduce those pesky and sometimes illegal phone calls we all receive. The competition winners – two software programs designed to intercept and divert – split the $50,000 first prize. The problem? The Challenge was conducted over five years ago, yet robocalls are more rampant than ever today. 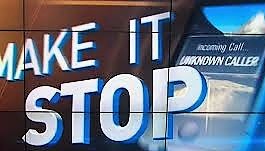 The telemarketing calls of old seem quaint compared to the lifeless computer-generated voices of the last several years. Used to be, you’d answer the phone to a real voice; a sunny greeting in oft-broken English or heavy accent. The caller would say, “Yes, is this David Wilson, please?” or, “Hello Mr. Wilson, how are you doing today?” Who do you know who starts a phone conversation with wording like that? (Even better, when they’re looking for my wife Brigid – pronounced with a soft “g” – they mangle her name in ways I’ve never heard before.)

At least the old telemarketers sold you products or services too good to be true (“Congratulations – you’ve won a seven-day Hawaiian cruise!”), and at least they were human. Today’s robocalls are scams disguised as threats. Pay this tax bill immediately or the IRS will break down your door and haul you off to prison. Upgrade your Microsoft operating system now because your warranty’s about to expire. Buy this health insurance plan because yours doesn’t cover anything. I might listen to these pitches if they came from a real person, but the synthesized voice of a robocall triggers the involuntary reflex “hang up”.

For me, the most effective solution to robocalls is simply not answering in the first place. If the Caller ID doesn’t convince me it’s a real call, I let it go to voice mail. Sure, my provider offers a call-blocking service, but they charge a fee. Why would I pay good money to manage a situation I didn’t ask for in the first place? The same goes for the better call-blocking applications out there. They’ll make them go away, but it’s gonna cost you.

By the way, not answering in the first place also stops robocall breeding. Just by picking up the receiver or hitting “Answer”, you’ve identified yourself as a number that works, which means the robocall provider sells your number to other providers, and that means more robocalls. Picking up the phone is why Americans received 16.3 billion robocalls in 2018… and that was just January-May.

Robocalls are a nuisance – sure, but at least they’re not threats to the human race itself. That prospect turns my dreams into nightmares every so often. Whether vast supercomputers, unfeeling combat robots, or microscopic drones, you have to admit – we’re on the precipice of technologies just itching to get beyond our control. Fiction does a great job exploring the possibilities. Read Michael Crichton’s “Prey” (self-replicating nanotechnology), Daniel H. Wilson’s “Robot Uprisings” (just what the title suggests), or simply watch the brilliant 2014 film, “Ex Machina”. The final scene – when Ava walks confidently into the public domain and the credits roll – is perhaps the most chilling moment of the entire movie.

As if to mock this post, my brother-in-law – visiting here at the house as I speak – just received a call on his mobile phone. Another robocall, and probably another scam disguised as a threat. Maybe the call wasn’t by accident, but rather a triggered response from a nanobot keeping an eye on my keystrokes. A subtle message, as if to say: we’re here and we’re watching. Sure, I can plead “no-mo-robo” (which is also the name of a call-blocking company), but I know the robots are only growing in numbers. Better make room then – another highly-intelligent species is quietly joining the party here on Earth.

Clearly I have something to say. This blog was born of a desire to elevate our speech, using the more eloquent words of past generations. The stories I share are life itself, and each comes with a bonus: a sometimes-forgotten word I hope you’ll go on to use more often. Read "Flying in the Face of Reason" to unearth a few mysteries linked to Denver International Airport. Read "Color of Courage" to better appreciate recipients of the Purple Heart. On the lighter side, read "Sugar Cured" to discover a creative fix for headaches. As Walt Whitman said, “That the powerful play goes on, and you may contribute a verse.” Here then, my verse. Welcome to "Life In A Word".
View all posts by Dave →
This entry was posted in America, culture, movies, technology and tagged blocked call, Federal Trade Commission, FTC, iPhone, Michael Crichton, rampant, robocall, telephone. Bookmark the permalink.