Over the next two weeks, the world will be witness to the greatest gathering of athletes and sports mankind has to offer. The XXXI Olympiad -that’s 31st for you non-Romans – will be hosted by the city of Rio de Janeiro.  (Just saying “Rio” reminds me of “FedEx” – it’s simply not the whole enchilada).  I must admit I didn’t realize “Olympiad” refers to the four-year period between Olympic Games – not the Games themselves.  Count backwards by fours and you’ll realize the first modern Olympic games was held way back in 1896. 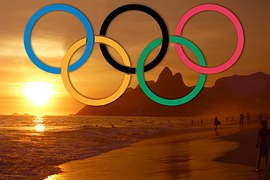 You may say, non-sports-fan that you are, there is nothing seventeen days of sports competitions can do to stir your soul. But I urge you, put away the electronics and have a look, even if only for an hour or two. A moment will be there and you don’t want to miss it.

The first Olympic Games I remember well was 1976 in Montreal.  As a fourteen-year old, I was captivated watching Nadia Comaneci – also fourteen (!) – as she won three gold medals and scored seven perfect 10.0’s in women’s gymnastics.  I love this trivia item: the gymnastics scoreboard could only hold three digits, so Comeneci’s perfect scores were expressed as “1.0”.  For anyone who watched, it was one of the most electrifying performances in any sport and in any Olympics.  It was a moment to remember.

The second Olympic Games I remember well was 1980, but only because the United States boycotted the events due to Russia’s invasion of Afghanistan at the time (which is ironic given America’s involvement in that country today).

That brings us to 1984: the XXIII Olympiad in Los Angeles.  I was a senior in college, working a summer internship in Southern California.  I was witness to a city transformed.  The Games were hosted in a revitalized Coliseum (the same venue where the Olympics were held in 1932).  Ronald Reagan was President and opened the Games in person.  Sports venues were spread across the city, and the coincidence of several competitions on Fridays caused most businesses to shift to 4×10 workweeks.  American flags were everywhere.  The Olympic spirit was alive and well in the City of Angels.

I distinctly remember the torch relay at the L.A. Games, passing through the neighborhood where I grew up; John Williams’ glorious musical composition at the opening ceremonies (where dozens of white grand pianos were played simultaneously); Mary Lou Retton’s golds in women’s gymnastics; and Carl Lewis’s golds in track and field.  I also remember the women’s 3,000 meter run, highly-anticipated because America’s Mary Decker was racing South African sensation Zola Budd.  The two collided mid-race, Decker went down, and she never finished the race (Decker’s anguished face as she lay on the track is one of the Olympics’ classic photos).  There were moments in L.A.

Here’s one more Olympic moment which may surpass any I’ve mentioned above.  It was the women’s marathon.  I don’t even remember the city or the year or the woman who won the gold.  But I do remember the woman who won the bronze.  As she entered the stadium for the final meters of the race, she looked over her shoulder and saw… no one.  The bronze was hers.  She raised her arms in triumph as she finished that final lap, crying in apparent disbelief.  The unbridled joy and tears on her face as she crossed the finish line is a moment I’ll never forget.

The Olympics.  Rio de Janeiro.  Starting tomorrow.  Watch.  A moment will be there and you don’t want to miss it.