Ten years from now – this month – the U.S. will celebrate its 250th birthday. That’s remarkable to me considering I still have vivid memories of America’s bicentennial back in 1976.  To put it another way, I’ve been witness to more than 20% of the entire history of the United States.  We really are a young country, aren’t we? 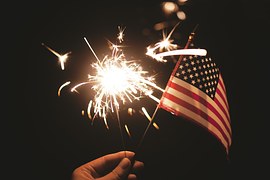 Earlier this week my wife and I were driving back to Colorado from California, after a week of vacation at the beach. Passing through Utah we reached a small town called Cedar City. There’s nothing remarkable about Cedar City. It’s the home of Southern Utah University and almost 30,000 residents. But the name stirred a memory in the deep recesses of my brain. And then it hit me. Cedar City was part of a contest the Los Angeles Times newspaper sponsored when I was a teenager – a creative way of celebrating the nation’s big birthday.

The contest (if my vague memories serve me correctly) took place over fifty of the fifty-two weeks that year. Each week The Times published a trivia puzzle consisting of a jumbled American city name and a couple other facts you had to figure out about the locale or surrounding state. As the contest went on you realized The Times was picking one city from every state in the union. You cut out and completed each puzzle by hand, and at the end of the contest submitted the whole pile to The Times, to be included in a cash drawing. Our family’s World Book Encyclopedia – not the Internet that was still twenty years from reality – helped me with the research.

I didn’t win The Times contest but I know I learned a lot about our country in the process – including a few details about little Cedar City, Utah.  Needless to say we are a remarkably diverse collection of states, towns and people; especially for a country so young.

America’s 150th birthday – the “sesquicentennial” – was honored back in 1926 when Calvin Coolidge was president.  You can find Coolidge’s celebratory address to the people here.  One passage in particular resonated with me: “Amid all the clash of conflicting interests, amid all the welter of partisan politics, every American can turn for solace and consolation to the Declaration of Independence and the Constitution of the United States with the assurance and confidence that those two great charters of freedom and justice remain firm and unshaken.”  Powerful words then, but I wonder if today’s leaders would be so bold as to make the same statement?  Look no further than the current presidential election: the Constitution and the Declaration are being called into question like never before.

Ten years from now the U.S. will celebrate its “sestercentennial” – fully 250 years of glorious independence.  Philadelphia is already campaigning to be the host city for the national celebration.  2026 won’t be a presidential election year nor an Olympic year, but the fireworks and pageantry will surely be brighter.  Let’s hope another decade brings not only renewed pride and optimism in America, but also a sense that we are – states, towns, citizens – “united” once more.

2 thoughts on “The Aging of Independence”