On a recent trip to Sweden, my wife and I went to an “ice bar” in one of Stockholm’s downtown hotels.  The experience is unique and exactly as advertised.  You enter a small lobby adjacent to the hotel, where payment gets you admission and a drink.  Then you don parka and gloves and pass through double-doors into the bar itself.  The temperature immediately plummets to well below freezing, and everything – I mean everything – is made of ice. 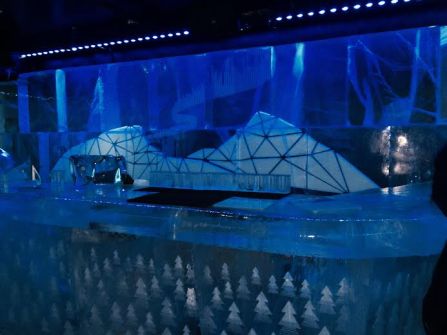 The photo above is the ice bar itself, where drinks are prepared and served.  If you look closely you can see the “glasses” lined up along the back – really just big cubes of ice hollowed out to hold the alcohol.  Once you have your drink you’re encouraged to seat yourself at one of the nearby booths.  Your table and chair are made of ice.  Several free-standing ice walls define the space.  The lighting changes slowly – different colors and levels of brightness – to accentuate the nature scenes and cityscapes expertly carved into the walls.  The entire facility is melted and reconstructed twice a year.

As I think back on our ice bar experience I realize this is an example of reinventing a rather ordinary activity.  Take away the ice and all we’re doing is having a drink in a bar.  The genius of the ice bar is that its inventor realized people would pay good money for the novelty.  This, my friends, is how you aggrandize an everyday activity.

If you’ve heard of ice bars you’ve probably heard of oxygen bars too.  Another clever soul realized people would pay good money ($1/minute!) to consume flavored varieties of oxygen.  Throw in the purported health benefits and the customers came a-flocking.  I won’t cave into an oxygen bar anytime soon but I might pay good money to see the patrons themselves – fitted with an apparatus that goes around the ears and up into the nostrils – breathing what is obviously available for free in the atmosphere around them.

Los Angeles boasts a gourmet water bar, which includes a 46-page menu of bottled waters; some as much as $20/bottle.  And for $50 you can take a water-tasting class.  The venture has been described as a “rousing financial success”, expanding recently with two more locations.  Consider that California – drought-stricken as this generation has ever experienced – boasts a thriving pay-for water business.  I admit I’ve had my share of bottled water, but I’ll sooner pay $25 for my ice bar drink than $20 for my water bar water.

We are a generation that aggrandizes; infusing new life into run-of-the-mill doings.  Movies have evolved from silent to “talkies”, from black-and-white to color, from two dimensions to three, and from sound to “surround”.  Bowling and miniature golf offer glow-in-the-dark versions.  Ski and snowboard at night under the lights.

Just before our trip to Sweden we also visited Denmark, home of the famous author Hans Christian Andersen.  If you know Andersen’s story “The Emperor’s New Clothes”, it’s a fitting fairy tale for the subject at hand.  The emperor wants a stunning new outfit for the royal parade, so his clever tailors convince him to spend a couple of trunks of gold coins on invisible clothes – so stunning they are “like nothing he’s ever seen”.  Thus the emperor parades in his underwear while the tailors escape with a small fortune.  Money for nothing.

Maybe we need to reconsider how we spend our hard-earned dollars on things like ice bars and oxygen and movies.  Aggrandize all you want, but in the end isn’t it really just about the drink?