My wife and I are slowly remodeling our house, a room at a time. First, we took a big plunge and overhauled the kitchen. Then we gutted the master bath. Now we’re thinking about a large deck with indoor/outdoor spaces. But that was before a recent trip to Germany, where we cruised a good stretch of the Rhine. Suddenly “remodeling” takes on a whole new meaning. 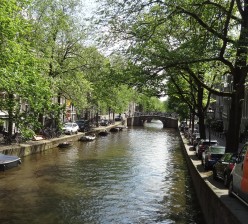 Our cruise down the Rhine started in Amsterdam.  Bad idea.  Amsterdam is loaded with the prettiest little canals and bridges outside of Venice.  As we were floating up and down the “city streets” we thought, “let’s put a canal bridge on our property!”  But a canal bridge requires a canal, else you get London Bridge in the middle of the Arizona desert.  So first we’ll be building a canal.

Our next stop on the Rhine kept us in the Netherlands.  We landed briefly in Kinderdjjk, not even a map dot if it wasn’t for some of the most beautiful windmills in the world.  Kinderdijk’s windmills not only pump water; they’re houses.  We must add a windmill to our remodel list!  It would make a unique guest house, and instead of pumping water from our well we’ll just windmill it up to the house from the canal.  You know, the canal we just installed so we could put in a canal bridge.

Once our river boat hit Germany, I knew our remodel was entering uncharted territory.  In Cologne, we walked through one of the most spectacular cathedrals in the world (seven centuries to complete!)  In every Rhine river town we passed there was another cathedral (more likely a church, but over there they all look like cathedrals).  Am I saying I need a cathedral on my property?  Of course not; the neighbors would consider that a little pompous.  But a chapel would be nice.  Something to accommodate a steeple and bell tower as elegant as the ones you find in Germany.  Wouldn’t it be great – calling the family in at dinnertime?  BONG-BONG-BONG!!!

Here’s the other problem with Germany.  Castles.  Big ones.  Little ones.  Intact ones and crumbling ones.  Wherever you look in the Rhine region, you see postcard-perfect towns with castles at their highest points.  I mean, who wouldn’t want a castle on their property, right?  The problem is, here in the flatlands east of the Colorado Rockies, a castle would look, well, compromised.  You’ve got to have your castle sitting higher than everything else (otherwise, how would you lord over your domain?).  Not to mention, castles take centuries to build.  I’d like to be alive when my remodel list is finished.

(Side note: my wife showed a disturbing interest in the castle torture chambers and all their nasty devices.  Either this is lingering effects of watching “50 Shades of Grey” too many times, or I’m in deep trouble.  I’ll have to keep a closer eye on her). 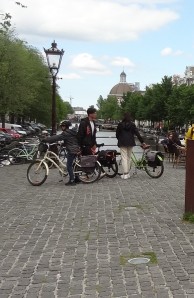 Castles just reminded me about one more thing in Amsterdam.  They love their cobbled streets.  Sometimes they’re perfectly uniform and flat; other times they’re ankle-busters if you’re not careful.  Either way there’s no avoiding the cobbles.  So now my driveway needs a remodel too.  I watched an Amsterdam-ian working to replace the cobbles on one of the bridges (yes, they cobble those too).  It looked like backbreaking work, one heavy stone at a time.  But if I’m going to have all my other Rhine region elements, an asphalt driveway just won’t cut it. 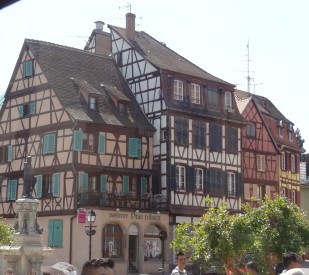 In the southwest of Germany, just before the Rhine flows into Switzerland, you make a stop in Bavaria: land of dense fir trees, Black Forest cake, and cuckoo clocks.  You’d swear you walked into a fairy tale, with Snow White (or Hansel & Gretel, or a hobbit) emerging from the nearest Tudor-style cottage with a smile and some gingerbread.  Fortunately, nothing in Bavaria made it to the remodel list.  I suppose we could plant a forest of firs, but that’s just tempting a large-scale fire and we’ve already had enough of those in Colorado.

Also just before Switzerland, the Rhine passes through several locks; those mechanical wonders raising vessels from the lower river on one side to the higher river on the other.  There’s nothing like watching a lock do its thing while you’re in the lock.  Just when I thought I was done with my remodel list, here come the locks.  What a great way to secure my property!  Raise the driveway higher than the street; then force my visitors to enter through a lock!  On second thought, that’s too much work.  I’ll add another castle element instead – a drawbridge over the canal I installed way back in the second paragraph.

If you think my remodel is brazen (i.e. “Dave, do the deck and call it good”), just you wait.  My list is not quite complete.  Our cruise ended in Switzerland.  OMG.  I repeat, OMG.  How the heck am I going to remodel our property into Little Switzerland?  There’s nothing I wouldn’t tap from this Alpine dreamland: the dairy farms (which means a whole herd of dairy cows), the cheese and chocolate, and some of the prettiest, cleanest lakes in the world.  I’d even recruit a few of the Swiss themselves (as if they’d rather live in Colorado).  Of course, the real problem with recreating Switzerland is those dang gorgeous Alps – snowy caps, grassy meadows, cog railways and all.  Building Alps on my property would require ten billion delivery trucks of dirt and I just can’t afford that.  I’ll settle for gazing at the distant Colorado Rockies instead.

Come to think of it, gazing at the Colorado Rockies requires a deck.  That I can manage.  Let’s put my Deutschland delusion to the side and just start with a deck, shall we?