My Amazon order history says a lot about my purchasing habits. I am a buyer of needs vs. wants. Pet food. Printer ink. Humidifier filters. But every now and then, a little something nostalgic sneaks into My Shopping Cart. Favorite childhood books for my one-year-old granddaughter.  A balloon-launching catapult to make a Thanksgiving turkey fly (it didn’t).  Italian chocolates from Perugia, also discovered during a year abroad in college.  And just today – on total impulse – a Rubik’s Cube.

Rubik’s Cube – adding a few wrinkles to us baby boomers – celebrates its forty-fifth birthday this year.  Back in 1974 when it was invented (and originally dubbed “Magic Cube”), the 3x3x3 trinket earned our attention for its mechanical magic as well as its almost-impossible-to-memorize solution.

To be precise, there are 43,252,003,274,489,856,000 (that’s “quintillion”) possible positions of Rubik’s colorful squares.  The Cube comes with neither instructions nor answers.  Already solved in its packaging, you can’t help twisting it up into a mess of color.  In our pre-Internet world, Rubik’s Cube required endless gyrations in search of the answer (instead of just, “Hey Alexa”).  But there was something immensely satisfying about the resulting nine squares of single color on each of its six sides.  There was also something tempting about peeling off the colored stickers and rearranging them instead.

Erno Rubik, a Hungarian inventor, was an architect and architecture professor “searching to find a good task for his students” when he completed the Cube’s first working prototype – a mess of wood blocks and rubber bands.  A small plastics company took a chance on its manufacture and the rest is history.  In the first four years alone, two hundred million Cubes were produced and sold.

I was in college (and also an architecture student) when Rubik’s Cube first hit the shelves.  Its perfect symmetry and twisting ability to reinvent its colorful look went hand-in-hand with my interest in building design.  I remember keeping a Cube on my dorm room desk – at first for mindless manipulation; later for successful solving.  Not that I could solve it quickly, mind you.  The world record – an average of five solves – is six seconds.  The world record with one hand (???) is nine seconds.  The world record using only your feet (again, ???) is twenty-two seconds.  My solve is expressed in minutes, if not hours.

Few puzzles compete with Rubik’s Cube for sheer “can’t put it down”.  But there are a few.  One of my favorites was the wooden double maze, the box-like puzzle with the Etch-A-Sketch dials on the side, maneuvering the steel ball through the walled maze without dropping it through one of several holes.  I devoted hours and hours to that puzzle, always sweating those final tricky turns to the finish.  Another favorite: Marble Solitaire, where you hop-eliminated marbles in search of the perfect solution: a single marble standing proudly in the board’s center divot.  Finally (courtesy of Cracker Barrel restaurants), how about “Triangle Peg Solitaire”, the hop-elimination puzzle with the colored golf tees?  Thanks to that little game, my kids were supremely patient after the dinner order was placed.

With somewhere near four hundred million sold, Rubik’s Cube is considered the best-selling toy of all time.  Its inventive design landed the Cube in the permanent collection of the Museum of Modern Art (MoMA) in 1982.  The Cube also garnered “Toy of the Year” in eight countries, including Germany, France, and the U.S.

Inevitably, there were attempts to advance Rubik’s design, such as a 4x4x4 version (“Rubik’s Revenge”), or pyramid, dodecahedron, and hexahedron shapes.  But going completely off the rails, look no further than GoCube – a thoroughly high-tech update to Rubik’s.  GoCube is also 3x3x3, but rimmed with LED lights, and contains wireless smart sensors, an embedded gyro, and an accelerometer.  Download the GoCube app to your phone (of course there’s an app), and watch your twists on-screen instead of on the cube itself.  The app guides you to the solution (if you so choose), creates alternative mosaic-looking puzzles, and run reports on solving speed and efficiency.  You can even wage virtual head-to-head competitions.  All for “only” $119.

I’m sure Erno Rubik (and Will Smith) would pooh-pooh GoCube as too much of a good thing.  I would agree.  The app-driven, light-up, hundred-dollar GoCube is over the top, with zero nostalgia to boot.  On the other hand, Rubik’s Cube cost me $4.59 on Amazon.  That’s a sweet deal, and a cheap way to learn how to do the twist all over again.

Some content sourced from Wikipedia, “the free encyclopedia”, and the Wall Street Journal article, “Never Solved the Rubik’s Cube?…”

Nestled quietly amid the several headlines for the Presidential Inauguration and the Women’s March on Washington last week, the Associated Press (AP) reported an incident of marble madness near Indianapolis: “… a truck carrying 38,000 pounds of marbles lost its trailer… the marbles were on the shoulder and in the median… there were no injuries, but a lane of traffic in that area was affected by the cleanup during much of the day.”

I was lucky to catch the marbles story on my news feed.  It rolled in and rolled out (ha) in the space of about twenty minutes, making way for the more important headlines of the day.  A spill of 38,000 pounds of marbles!  That’s a whole lot of little glass orbs, people. Your average marble weighs 0.16 ounce (proving once again you can find anything on the Web), so with sixteen ounces to the pound you have a nice “round” estimate of 3,800,000 marbles commanding chaos on that Indiana highway.

As short as the AP article was (you’re reading just about all of it in the quotes above), I love the handful of details. One, the marbles were “on the shoulder and in the median”. In other words, they cleaned up themselves by rolling both directions off the convex surface of the asphalt. Two, “there were no injuries”. My first thought was the image of windmilling arms and dancing feet caused by a pail of marbles thrown in front of someone (I guess cars don’t react the same way). Finally, we have “… the cleanup during much of the day.” How the heck do you clean up 3.8 million marbles? My first choice would be a gigantic ride-on monster vac, preferably something designed by Dr. Seuss. 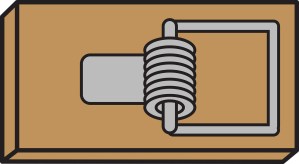 This story resonates with me because I had a childhood obsession with marbles – and marble games.  In the 1960’s the toy company Ideal came out with “Mousetrap”, one of the first mass-produced three-dimensional games.  Mousetrap was a fascinating contraption which – when completed – moved marbles and other game pieces in a start-to-finish process attempting to trap another player’s mouse.  When I first saw Mousetrap in action I became an instant marble enthusiast.

Mousetrap surely inspired the Matchbox game “Cascade” (which I was lucky enough to own).  Cascade consisted of three small trampolines arranged in a row between a tower and a scoring tray.  The tower included a clever “marble elevator” – a corkscrew raising the marbles to the top – only to dump them down a chute where they would bounce one-two-three on the trampolines and land in the scoring tray.  I’m not sure where in this endless loop you have a “game” but Cascade was sure fun to watch (see video here).  A more advanced version of Cascade came out the same year in Ideal’s “Bing-Bang-Boing”. 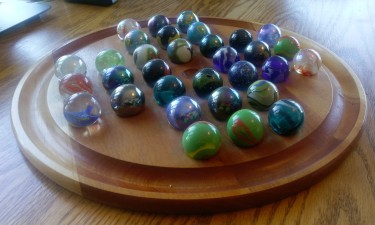 Countless marble contraptions have been designed since the games of my youth (the Web is full of fun videos), and let’s not forget Nintendo’s famous video game “Marble Madness”.  But as an adult I prefer the more elegant applications like Chinese checkers and marble solitaire (above photo), and the wooden box mazes I write about in Back in the Sandbox. 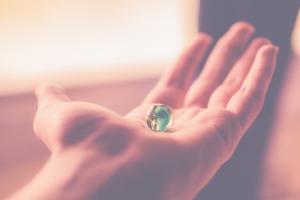 In the spirit of storm-chasers, I’d love to race down the highway to watch the next truck to lose its marbles somewhere in this country.  But maybe I’ll just stick to the marbles I own myself.  After all, what’s the saying?  A marble in the hand is worth 3.8 million on the road?  Or something like that.

Draw a line in the sand.

Therein lies the allure of the most unique Christmas gift I received this year.  The before/after photos above depict a modern-age spin on a Zen garden, only the “gardening” is done automatically; almost magically.  Place the ball where you feel the magnetic pull, spin a couple of dials underneath, and sit back and watch.  The ball is pulled invisibly around the sand, creating beautiful designs like the one in the second photo.  My “Sandscript” (which can be found here if you want one of your own) reminds me of “Spirograph”, the geometric drawing toy I had as a kid.  But my Zen garden is so much more than cool drawings.  It’s about finding calm within the daily chaos, or perhaps just a different way of looking at things.

Here’s what’s really Zen about my Sandscript.  First, you determine when the drawing is done by turning off the dials – the ball doesn’t just come to a stop on its own.  Second, the line drawings are random, and rarely symmetrical.  That’s my own brand of Zen right there.  I like things a little too neat and organized, so anything never really finished or never really perfect is my kind of therapy.

I always thought Zen gardens – one of countless cultural contributions from the Chinese and Japanese – were a little out there.  Authentic Zen gardens are the size of basketball courts and have you shuffling around the gravel and rocks, raking and rearranging as you seek your higher self.  Several years ago we bought my mother-in-law a tabletop Zen garden and I found myself drawn to the “gardening”, not really understanding why.  There is an undeniable calming effect when you draw lines in the sand.

The same can be said for mazes.  I loved mazes as a kid, especially the books you could draw in or the tabletop box where you turn the dials and tilt the maze to get the ball from start to finish.  Mazes are purported to have the same calming affect as Zen gardens.  I always thought mazes were limited to the hedge or cornfield variety but there are all sorts, including a chain of amusement parks throughout America.  We have a maze right here in our neighborhood, fashioned from painted lines on the asphalt surface of a cul-de-sac.  I’ve walked a few mazes in my lifetime but I’m still in search of the Zen in the experience.  I think I’m too preoccupied with finding my way out to discover any calming effect.

Zen is a great word, by the way.  There’s something about the sound of the “Z”.  Zen.  Or maybe I just like words starting with “Z” because they’re not used all that often.  Quick, name ten words off the top of your head starting with “Z”.  I gave myself sixty seconds and could only come up with seven.

If you don’t think Zen goes hand-in-hand with American culture, check out the following photo from a visit to a local retailer: 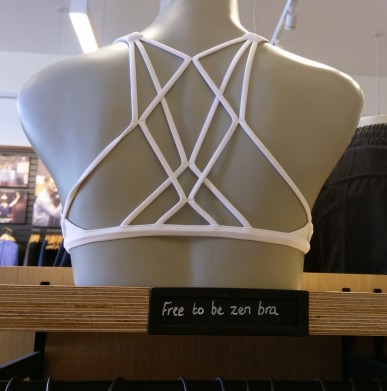 My posts on Life In A Word will continue to run the gamut of topics, including personal experiences and humor for added zest (ha).  As you read you may find unexpected comfort in my words.  That’s not by chance – it’s probably just me playing with my Zen sandbox before I sat down to the keyboard.