As I was digging into dinner last night, I surveyed the contents of my plate and decided the food was looking rather pedestrian. Yes, I’d topped the roast pork with a tasty sour cream and onion sauce. I added lemon zest and shredded cheese to the broccoli. But the potatoes were run-of-the-mill, simply diced and baked with nothing but salt and pepper. I could’ve done more there; a lot more. Starting with potatoes from La Bonnotte.  It’s just, I don’t want to spend $300 for a pound of them. 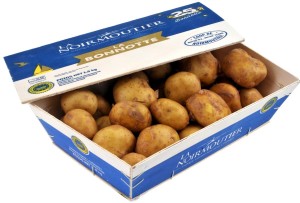 $300 for potatoes – yikes.  It sounds ridiculous unless you’re British royalty or the finest restaurants in Europe.  A couple of medium-sized Russets – the ones we bake – weigh a pound, but the Bonnotte potato is more like the small red ones you cut up and season. 10-12 Bonnottes in a pound; so like, $30 each.  That’s a pricey bite (and not exactly “small potatoes”).  But if you’re willing, you can purchase your share of this delicacy; that is if you’re quick.  They’re only on the market ten days a year.

What makes the Bonnotte the aristocrat of spuds?  Here’s the meat and potatoes of it:

Here’s my favorite reason to buy this hot potato (and for heaven’s sake, don’t drop one): you don’t peel them.  You shouldn’t peel them.  Their unique flavor – tastes of lemon, earth, “the sea”, and chestnut – is most concentrated in the skin.  You eat them just the way they come out of the ground.

Luxuo is an online news portal whose mission is “to uncover the values which permeate the fiber of the world’s most recognizable luxury brands” (Got all that?) The Luxuo website has a dropdown menu for timepieces, yachting, motoring, properties…. and now you’ll find potatoes, because La Bonnottes (you don’t even call them “potatoes” at this price) are the most expensive potatoes in the world.  By some measures they’re one of the most expensive foods in the world.  Saffron, macadamia nuts, Beluga caviar, and white truffles are the top four, followed by La Bonnottes.  Blue-blood spuds indeed.

[Author’s Note: I just had to know why we refer to things as “blue blood”.  The term originated in Spain.  It was used to differentiate between people with light skin from those with darker complexions. The veins of southern Europeans appeared bluer due to their pale and translucent skin. Wealthy landowners or their descendents were part of an upper class in Spain, and somewhere along the line the veins were associated with wealth.  Not a look I prefer, but the money is tempting.]

After the La Bonnotte harvest and sell, a small number of the potatoes are reserved for a local festival, where they’re served plain, just as you see them in the entertaining video below (because no other ingredient deserves to share the pan).  Who can blame the farmers for throwing a party?  They’ve convinced the world to purchase potatoes for $300/pound yet again, just as they’ve done for decades before.