In the Dr. Seuss children’s classic Hop On Pop, readers travel through pages of rhyming word pairs, with the usual whimsical cartoon characters acting out the scenes (ex. “All Ball, we all play ball” and “Day Play, we play all day”). It’s not until about halfway through the book where you see the title pair, “Hop Pop”.  And when I saw “STOP, you must not Hop on Pop”, I decided Dr. Seuss was referring to the latest junk food mashup, “Pepsi x Peeps”.

This blog often comments on sweets – so much so I should probably have a category called “sugar”.  I’ve talked about Halloween candy, chocolate, and licorice, and it’s a little unsettling I’ve discussed doughnuts in two of the last ten posts.  Naturally, my literary sugar addiction couldn’t resist a word or two on a truly disturbing concoction.  Just in time for Easter, Pepsi is advertising a Peeps-flavored soft drink.  I’m trying to get my taste-buds imagination around this “pillowy-soft and sweet” marshmallow-flavored cola.  I can’t taste it, can you?  All I come up with is sugar.  Lots and lots of sugar. 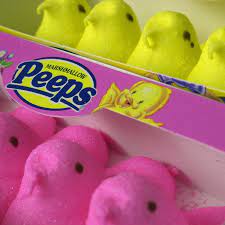 You know Peeps.  Of course, you do.  The colorful marshmallow bunnies and chicks are the hot item every Easter in the U.S. and Canada.  Consumer demand for the cute little creatures means Just Born Quality Confections cranks out 2 billion every year.  Naturally, Peeps has moved past Easter to be available year-round, especially for other holidays.  Just Born even expanded the product line beyond candy, most notably with a Peeps-flavored line of lip balms.

With off-the-charts (and inexplicable) demand for Peeps, I shouldn’t be surprised Pepsi injected the flavor into its latest hybrid drink.  But here’s what bothers me.  Even if marshmallow-tasting cola is your thing (and you should have your taste buds examined), why does it have to be “Pepsi x Peeps”?  It’s not as if the marshmallow taste of Peeps is unique. (It might as well be “Pepsi x Lucky Charms”.)  The appeal of Peeps is exactly what’s not in the Pepsi product: fluorescent colors, cute little creatures, and sugar-dusted spongy-soft marshmallows.

I consider “Pepsi x Peeps” a disservice to marshmallows everywhere.  Marshmallows deserve their place in more respectable foods.  Oozing out of S’mores around the campfire.  Adorning sweet potato casserole on Thanksgiving.  Buried in Rocky Road ice cream.  Abundant in Rice Krispy treats.  Floating gracefully in a sea of hot chocolate.  But reduced to a mere flavor, wandering aimlessly amidst the carbonation bubbles of a cola?  That’s just harsh.

No matter.  Consumers love new products, especially combos of tastes that were already good by themselves.  Burger King combined Cheetos and Mac ‘n’ Cheese for a carb-loaded side dish.  Taco Bell combined Doritos and tacos into one of its all-time best-selling entrees.  And Reese’s perfected peanut butter and chocolate as a candy (as did many others as an ice cream).

I won’t be buying “Pepsi x Peeps” anytime soon.  But neither will you.  In the ultimate snub, this promotion is not for a product you will find on your grocery store shelves anytime soon.  Instead, you can only “win” the drink by hashtagging #HangingWithMyPeeps on your springtime photos.  3,000 of the most creative Instagram and Twitter promotions will win three-packs of the colorful cans.  I won’t be entering.  Instead, I’ll be expending my limited social media energy elsewhere.

I was raised in a Coke household so maybe it’s natural for me to knock Pepsi down a peg or two.  But they’re kind of asking for it when they’ve already test-marketed products like “Pepsi Holiday Spice” and “Pepsi Salted Caramel”.  They even amped the caffeine level in one of their varieties to promote it as a ‘breakfast drink”.  Pepsi will stop at nothing to get your business.  Including coercing you to provide free advertising on social media.  Suckers.

I hope “Peepsi” amounts to nothing more than an out-of-reach sweepstakes giveaway.  I hope marshmallows soon return to their roles as cute, colorful, edible animals.  C’mon, Pepsi – the Easter Bunny wants you to know: Stop hopping on pop!

Some content sourced from Laura Miller’s YouTube audiobook, “Hop on Pop”,  the People.com article, “Pepsi and Peeps Have Joined Forces to Create Marshmallow Soda”, and Wikipedia, “the free encyclopedia”.

18 thoughts on “Hopping on Pop”