My dad called the other day for a chat, but not before letting me know my answering machine was full. Since he couldn’t leave a message he just called over and over ’til I finally picked up. But here’s the thing: I don’t have any messages on my answering machine.  It’s not full at all.  So after the call I said to my wife, “Dad’s almost 92. I’ll forgive him a little confusion now and then. Probably mixed me up with one of my brothers.”

Do you still have a landline in your house, the one with a bulky handset and built-in answering machine?  If you do, it’s tethered to the wall with wires, which then connect to a march of telephone poles outside (more wires), which eventually route your call to wherever it needs to go.  Imagine – in a world of wireless – a phone call with a physical connection from one end all the way to the other.  It’s positively antique.

[Random thought: once the world is fully wireless what’ll we do with all those telephone poles.  Caber toss, anyone?]

Go ahead and mock my out-land-ish outdated phone – at least I don’t have a party line.  Back in the day, if you lived in the sticks you shared a single physical line with your neighbors.  You were a “party” of subscribers who often found themselves talking over each other (“crosstalk”) or connected to the wrong party at the other end.  Party lines it is said, were the birthplace of gossip.

The reason I stubbornly cling to my landline is probably not the same as yours.  I keep my landline exclusively for those calls with my dad (er, and to divert telemarketers from my smartphone).  My dad can’t hear very well so anything wireless is a challenge, especially when you get the occasional syncing issue in the conversation.  On a landline Dad hears LOUD and CLEAR… even if he doesn’t always acknowledge what I say.  Are his calls worth the monthly subscription fee?  He’s 92!  You bet they are.

Now let me ask you this.  How often do you call your own phone number?  Why would you?  Pick up the phone and you get dial tone – all good.  Set the answering machine to “on” so people can leave messages – even better.  Except when they can’t.  Let’s suppose – “hypothetically” – your phone company redirects your phone number to a random voicemail box.  And that mailbox is already full.  How would you know?  Only if you called your own phone number, right?  Or, only if the one person who calls you (“hypothetically” your dad) insists he can’t leave a message.

Damn.  Dad was right after all. 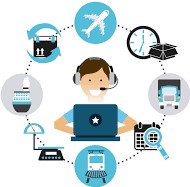 Here’s the best part.  I can’t even call my phone company to fix the problem.  Why?  Because I “bundled”.  You know, where you combine TV, Internet, wireless, landline, and whatever else you have so they’re all billed and serviced through a single provider? Mis-take. Try calling your satellite TV provider to ask about landline phone service.  After you explain what a landline IS, the young person at the far end transfers you to a “specialist” (someone much older who actually understands landlines).  That person acts as intermediary between you and the phone company.  There’s a lot of, “Can I put you on hold for a sec?” and, “You still there? and, “Hold tight, we’re still working on it” and even the occasional, “You did say this was a landline, right?  Y’know, you really should get rid of your landline…”.

Long story short, it took me the better part of a week but now my dad can leave messages on my answering machine again.  He also says I should listen to my father more often.  (For younger readers, this is an excellent example of “eating crow”.  Look it up.)

Electric Light Orchestra (ELO) – the English band of the ’70’s who somehow fused pop, rock, and classical – had their biggest U.S. hit with Telephone Line.  Its final verse begins, “Okay… so no one’s answering.  Well can’t you just let it ring a little longer, longer, longer?”  No ELO, I can’t let it ring a little longer – the phone company rerouted my number to a full voicemail box.

But hey, thanks for calling.