My wife and I went to the movies the day after Christmas. The theater lobby looked a little forlorn after the holiday rush. There weren’t many patrons besides the two of us. The employees wandered here and there without seemingly much to do. The concessions were woefully under-stocked. In fact, as we stood at the counter, we realized there were no nachos, no hot dogs, and not a single bottle of water to be found. Did all those “Star Wars” groupies buy up everything before us?  Did a link go missing in the supply chain? Can we blame the aliens?  Ah, but popcorn.  At least they had popcorn. 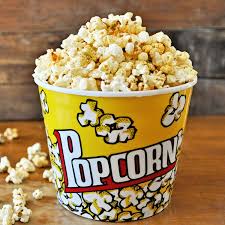 I can’t see a movie without cradling a big ol’ tub of theater popcorn.  Don’t ask me what chains the two together, but popcorn and movies are a heaven-on-earth marriage.  It’s like that Kacey Musgraves Christmas song about a ribbon without a bow.  The movie might be Oscar-worthy but there’s a big something missing without popcorn.  The next time you watch “Field of Dreams”, consider the ball field is surrounded by acres and acres of corn.  As if you need a metaphor.

Popcorn wasn’t always an option at the movies.  In the early 1900’s, the theater-going experience was different.  The auditoriums were much smaller.  The carpets and seats were lush and expensive.  The patrons tended towards upper-crust.  And the movies themselves… had no sound.  Any one of those reasons made popcorn a poor concession choice.  Theaters didn’t want kernels ground into their pricey floor coverings.  Patrons didn’t want a snack associated with the lower-class circuses and sporting events of the time.  Most importantly, no one wanted to hear crunching and munching while trying to read the subtitles of a silent movie.

The Great Depression – and “talkies” – ushered in the union of popcorn and movies.  A broader cross-section of patrons sought the theater for an inexpensive distraction to the hard times.  Popcorn was easy to mass-produce, and the smell and pop created an effective lure for the concession stand.  Crunching and munching was no longer a concern up against soundtracks.  And popcorn was affordable, even to those who could barely scrape together enough for the movie itself. 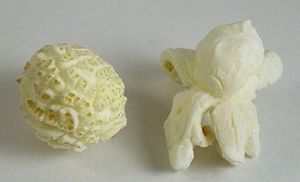 Do you prefer “mushroom” or “butterfly”?

There’s a little science behind popcorn to get it from husk to Hollywood.  Growers developed the appealing “butterfly bud”, with several “ears” to trap the butter and salt.  Growers also worked to shape popcorn to take up as much room in the bag as possible (less air), giving a more satisfying feel to the overall weight.  They coined terms like “expansion rate” and “mouth feel” and “finger control” – anything to make you buy more of the fluffy stuff.

All this talk of popcorn reminds me of a children’s book about a farmer who grew acres and acres of corn.  He’d store his corn in giant metal silos next to his field.  One summer day, the silos got so hot the corn inside started to pop.  The farmer heard the sound and climbed on the roof of one of the silos to see what was going on.  Suddenly the silo burst open, and the roof started rising above all that popcorn.  Up, up, up went the farmer.  When the popping finally stopped, the farmer was high up in the sky with no way to get down.  His neighbors came from miles around to try to help him.  The fire department’s ladders weren’t long enough.  The town had no helicopter.  Finally, the people talked it over and realized all they had to do was start eating the popcorn straight from the silo.  Down, down, down came the farmer until he was safe.

As much as I love popcorn, I only seem to eat it at the movies.  When my son was in college, he admitted to going to the theater, buying popcorn at the concession stand, and… leaving the building.  Who does that?  Then again, there’s nothing wrong with the idea (high price aside).  It’s like having turkey when it’s not Thanksgiving.  Or dessert before dinner.  Seems a little off, but really, why not?

As for me, I’ll continue to enjoy my popcorn with my movie.  I’ll pay the ridiculous price for the shrinking bag, and still eat too much.  The only problem with this scenario?  Finding decent movies anymore.  They seem to be fewer and further, at least on the big screen.  Thank goodness for Netflix and my air popper.

Some content sourced from the Wall Street Journal article, “How AMC Gets Its Popcorn From Stalk to ‘Star Wars'”, and from the Smithsonian Magazine article, “Why Do We Eat Popcorn at the Movies?”

Clearly I have something to say. This blog was born of a desire to elevate our speech, using the more eloquent words of past generations. The stories I share are life itself, and each comes with a bonus: a sometimes-forgotten word I hope you’ll go on to use more often. Read "Flying in the Face of Reason" to unearth a few mysteries linked to Denver International Airport. Read "Color of Courage" to better appreciate recipients of the Purple Heart. On the lighter side, read "Sugar Cured" to discover a creative fix for headaches. As Walt Whitman said, “That the powerful play goes on, and you may contribute a verse.” Here then, my verse. Welcome to "Life In A Word".
View all posts by Dave →
This entry was posted in America, culture, food, holidays, memories, movies and tagged circus, concessions, forlorn, movie theater, popcorn. Bookmark the permalink.

1 Response to Ribbons and Bows