Last month, I spent an entire post lavishing love and affection on Earth’s beautiful space neighbor, the planet Venus (see here). I was quick to point out – from Earth – you can occasionally see the planets Mars, Jupiter, and Saturn as well. Turns out that list is, ahem, incomplete by at least one planet. Clearly miffed by my post, our solar system’s Mr. Smallest and Innermost – the planet Mercury – decided to speak up this week.

For those of you who missed it, Mercury passed in front of the Sun on Monday.  For five hours or so, Mercury looked like a little black mole on the bright cheek of a much larger creature.  His orbit took him almost directly across the center of the Sun.  You may think Mercury’s show is no big deal; after all, he circles the Sun every 88 Earth days.  However, consider Earth, Mercury, and the Sun must be exactly lined up (put a ruler on it) for humans to witness a Mercury “Sun transit”.  We only get fourteen Mercury transits every Earth century.  The next one won’t happen until 2032.

I missed Monday’s Mercury transit myself, because a) I wasn’t up at sunrise in the Northern Hemisphere (when it happened), and b) I didn’t have the necessary eye protection to give it a direct look.  Instead, I enjoyed the online photos and videos from NASA and the world’s other space agencies (like this one).

The truth is, you don’t have to wait for a Mercury transit to observe the first rock from the Sun.  On several early mornings last month, you could’ve seen Mercury rising in the east (same as Venus), and you’ll see him again early next year – no telescope required.  Guess I got caught up in the allure of Venus and completely ignored her nearby brother.

Mercury – like all the planets – has some interesting facts.  He completes three rotations about his axis (days) for his every two orbits of the Sun (years).  Pretty slow for the smallest orbit in the solar system.  He has no moons.  He’s only about a third the size of Earth.  He’s pretty beat up, with the most craters of any planet, and “wrinkles” caused by the cooling and contracting of his iron core.  Only two of Earth’s spacecraft have ever visited Mercury, and even those stayed far away from the surface for obvious reasons (800.6°F on the sunny side; -279.4°F in the shade). 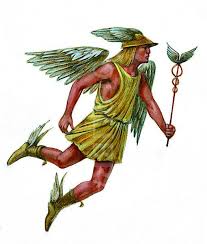 The Roman god for which Mercury is named is a lot “cooler” than the planet itself (ha).  Young Mercury wears a lot of hats, including (god of) financial gain, eloquence, and divination.  (Side note: perhaps Mercury should’ve been my blog mascot.  “Eloquence” was the theme of my very first post).  He also serves as the guide of souls to the underworld. Curiously, all these responsibilities take a back seat to Mercury’s most commonly known role – as speedy messenger to the other gods.  This role explains the naming of the planet, the fastest of the eight to circle the Sun.  Maybe we should also consider Mercury as messenger to the other planets, in case something gets weird with the Sun.  After all, Mercury will be the first to know.

I can’t talk about Mercury without a reference to the late, great Ray Bradbury.  Of all his wonderful science-fiction short stories – and there have been at least a hundred – my Bradbury top five includes “The Golden Apples of the Sun”.  “Apples” followed an exploratory rocket ship heading past Mercury to the Sun.  The crew is tasked with collecting a sample of the Sun’s golden fire.  I can still imagine the ship’s giant scoop as it extends from the hull and grabs a bit of the Sun.  The story’s real drama comes just after the collection, as the ship overheats and the life-support systems begin to shut down.  With respect to Bradbury, I won’t give away the ending.

Well then, enough about Mercury (probably too much).  I’ll conclude with a great tweet from Katie Mack, who was quick to note about Monday’s Mercury transit: “The official song of #TransitOfMercury is, obviously, ‘King of Pain’ by the Police.  But please note that the ‘little black spot on the Sun today’ referenced in the song is a ‘sunspot’, not Mercury, since ‘it’s the same old thing as yesterday,’ and (Mercury) transits only last a few hours.”

Keep on a-circling the Sun, Mercury.  I won’t forget ya next time.

Some content sourced from the BBC.com article, “Planet Mercury passes across the face of the Sun”, the Space-Facts.com article, Mercury Facts – Interesting Facts about Planet Mercury, and Wikipedia, “the free encyclopedia”.

3 thoughts on “Smallest and Innermost”