Whenever I talk about Colorado’s extreme winter weather, I tend to speak in glass-half-full generalities. “We need the moisture”, I say, or, “we’re making up for the dry winter we had last year”. Earlier this season I got nods of agreement when I said things like that. Then the nods stopped, because the avalanches began. Colorado has so much snow in the high country this year we’re triggering “intentional” avalanches, so the skiers don’t get buried.  But when yesterday arrived – and with it the first “bomb cyclone” storm in decades – I’ll admit; my glass edged precariously close to half-empty. 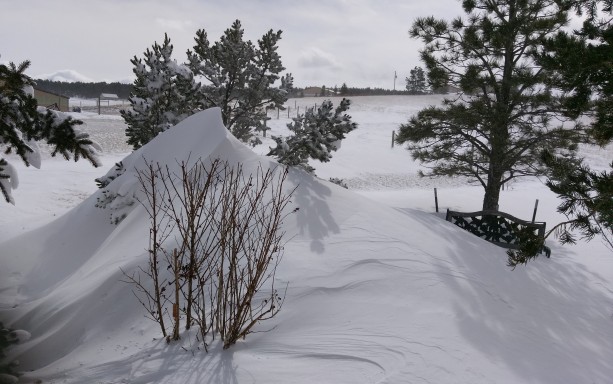 Haven’t heard of a “bomb cyclone”?  Don’t fret; neither had I until yesterday.  Bomb cyclones are roguish tropical hurricanes.  They choose the wrong season and they land in the wrong location.  Their formal name is even more ominous: explosive cyclogenesis or bombogenesis.  Bomb cyclones are the perfect storm of rapidly-dropping air pressure, causing rapidly-increasing wind speeds, combined with a significant moisture source.  BOOM!  That was Colorado’s weather in a nutshell yesterday.

From the front line (or front window), I can tell you bomb cyclones are best left to their own devices.  Stay inside, batten down the hatches, and brace yourself until all is calm again.  Several Coloradans chose not to heed that advice, and the result was headlines news last night.  1,100 cars stuck on the roads in our county alone.  Roofs ripped off buildings.  Trees uprooted.  One really stupid human rescued from a popular hiking trail.  You’d think we were Kansas with the word “cyclone” to our vocabulary.  Wait – come to think of it – we were Kansas yesterday.  Our bomb cyclone settled squarely over the Sunflower State, rotating its very bad side effects back around to the Centennial State. 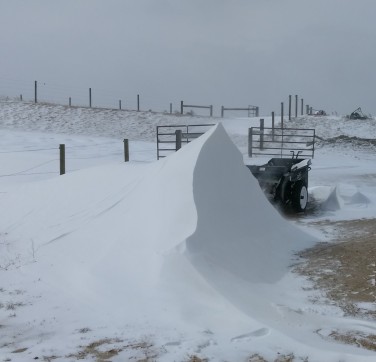 Local media called yesterday’s weather “a storm of historic proportions”.  By some statistics they were correct.  The air pressure was the lowest on record for Colorado.  Two cities to the south of us received record rainfall for the 24-hour period.  More miles of state highway were closed than ever before.  200,000 residents in the Denver area lost power.  It was like being dropped into the New York City of the movie, “The Day After Tomorrow”. 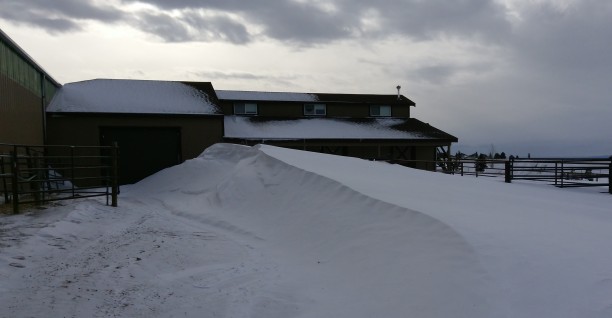 Here on the ranch, the bomb cyclone delivered a mixed blessing.  On the one hand, our power never went out, even though many of the neighborhoods around us lost theirs.  Our gas went out, but not really because (courtesy of a Google search) I discovered our furnace intake/exhaust pipes were blocked with snow and ice.  On the other hand, we now have a couple of snow drifts seemingly as high as the Rockies.  We also have as much snow inside our barn as immediately outside its doors.  The horses are not happy. 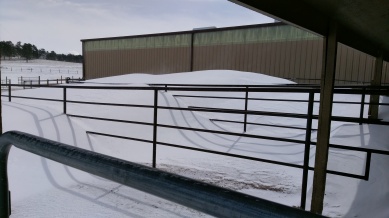 Glass-half-full again: it could be worse.  For perspective, we’ve had several more impactful storms in our twenty-five years of Colorado living.  One dumped enough snow to block our street for a week.  Another knocked out the power for three days.  Yet another put a mountain of snow on our back deck, eventually melting into enough water to flood our basement.  If you choose Colorado, you accept the unpredictability of the weather, as well as its consequences.  Wildfires in the summer.  Snowstorms in the winter.  Enough wind to make both even worse.  Coloradans love the outdoors, but we know the adventures that come with the territory.  Glass-half-full or glass-half-empty. 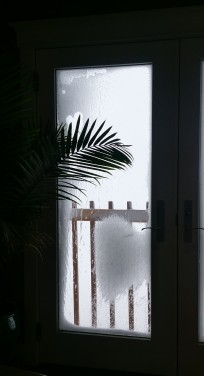 By the way, our bomb cyclone is spinning off to the east now, just as intense.  The states in the Midwest should keep an eye out, oh, around “the day after tomorrow”.   So long, sweetheart – we won’t miss ya.