If you sift through your kids’ trick-or-treat bags today, you may be in for a surprise. When it comes to Halloween candy, we Americans are a fickle bunch. “Best” and “Worst” lists kick into high gear this time of year – with fierce debate – and the results are likely reflected in what gets handed out at the front door. Would you agree – Reese’s Peanut Butter Cups are hands-down America’s most popular Halloween candy?  By the same analytics, would you agree Circus Peanuts are the worst?  Do you even know what Circus Peanuts are?

CandyStore.com recently assembled the candy list of lists – the current bests and worsts. Check out the details in their blog post here (and buy some candy while you’re at it).  CandyStore combed the Web for best/worst candy lists from a dozen publications, then mixed in the opinions of 40,000 of their own shoppers. How they sifted all that data into a single list is a worthy advertisement for Excel.  Here are the results:

Some comments (er, opinions) about the BEST list.  I can’t argue with Reese’s in the #1 spot, since I adore peanut-butter-and-chocolate, and a Reese’s cup is a convenient size somewhere between “full-size” and “fun-size” for the trick-or-treat bag.  Reese’s also happen to have an orange wrapper, so no adjustment needed for Halloween. The top five on the BEST list are solid choices, though I wonder where Snickers has the edge over Milky Way, Mars, or Almond Joy.  Three of the remaining five reflect candies joining the party well after I was a kid.  To this day, I’ve never had a “Sour Patch Kid”.

The WORST list is a little more interesting.  I’m surprised some of these earned a spot (even on a “worst” list), considering they were popular way back in the 1960’s.  But Smarties, Wax Coke Bottles, and Candy Corn bring a smile to my face, as each of them screams “Halloween” to me.  They seem to appear in October, then disappear for the next eleven months.  Wax Coke Bottles were the thought-we-were-cool 2-in-1 candy.  Bite off the bottle top for the drink, then put the wax in your mouth for a chewing-gum sensation.  In hindsight, ewwwww.

Candy corn, no surprise, is a polarizing confection.  You either love the little kernels or you simply can’t stand them.  They’re essentially corn syrup + sugar doused with a little food coloring.  Jelly Bean Candy Company has been making candy corn for over a century and sells hundreds of thousands of pounds of kernels each year, most in October.  Yet candy corn almost snagged the top spot on the WORST list.  Go figure.

On the other hand, Circus Peanuts deserve the WORST trophy.  I’m old enough to remember enjoying a real bag of peanuts at the circus, so why go and “candi-fy” my memory?  CP’s are peanut-shaped orange marshmallows (orange I suppose, because brown would not be an appetizing look for marshmallows).  Remarkably, CP’s have been around as long as candy corn, and you can still find them on your supermarket shelves.  Careful – some of those bags may have been manufactured in the late 1800’s.

Here’s another angle on the BEST list.  CandyStore took their analysis one step further and figured out, based on purchases August through October, which candy is most popular by state.  The methodology is not quite as scientific but the results are amusing.  You’ll find most of the BEST list represented, but you’ll also find a few head-scratchers.  Kentucky’s “favorite candy” is Swedish Fish.  Montana and Oklahoma prefer Double Bubble Gum.  West Virginians prefer Blow Pops.  As for my own state of Colorado?  Twix.  I can live with that. 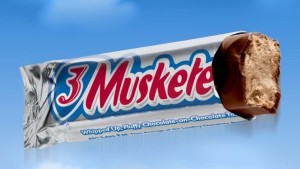 CandyStore may take pride in its BEST/WORST lists, but let’s all just agree to disagree, shall we?  IMHO, licorice (of any kind) belongs nowhere near a WORST list – and that includes Good & Plenty, while 3 Musketeers is embarrassingly absent from the BEST list.  Not a fan of chocolate-covered, fluffy, whipped nougat?  Pick one up sometime and reconsider.  3 Musketeers almost feels lighter-than-air, a clever ruse to offset the guilt as I add one to my shopping cart.

Some content sourced from the Wall Street Journal article,”Americans are Divided – About Candy Corn”.

3 thoughts on “Candy-Crunching the Numbers”