Think about the last time you invited friends to your place, for dinner or some other get-together. Did they bring a little something – a gesture of their gratitude – or did they show up empty-handed?  The gesture, whether a bottle of wine or baked goods, is especially thoughtful because it was never really expected, right?  You invited your guests after all, presumably with no strings attached.

When my wife and I hosted friends from Germany a few months ago, they arrived with a plethora of German candies (an embarrassing amount, really). From their suitcases emerged boxes of chocolates and all kinds of licorice. There were German cookies and tempting little cakes. Finally, they placed a curious-looking black round metal tin on the counter.  The label proclaimed, “Mann Des Jahres”, or “Man of the Year” (???)  The tin looked more like an award than candy.  Later, I discovered it was filled with marzipan.

Marzipan translates to “March bread” by some and “a seated king” by others, but to me it is quite literally almond joy.  Sweetened with sugar or honey, marzipan derives its distinctive flavor from the paste, meal, or oil extract of almonds.  Marzipan is more popular in Europe than in the United States.  It is typically shaped into edible fruits, vegetables, or little animals – popular around Christmas and Easter.  Marzipan is also used in thin sheets as glazing for cakes.  The marzipan from my German friends was one big delightful chocolate-covered disc of almond cake.  In hindsight, I wish they’d brought a dozen “Man of the Year’s” and left everything else at home.

Marzipan was not my first introduction to the joy of almonds.  I fell for them back when chocolate bars like Almond Joy and Mounds were kings of the candy aisle (no Kit-Kat or Twix in my day).  Almond Joy was confection perfection: chocolate and coconut topped with whole almonds.  Then I discovered chocolate-covered almonds and realized I didn’t need the coconut.  Then I learned to appreciate almonds all by themselves – roasted and seasoned with sea salt – and realized I didn’t need the chocolate covering.  Today, I keep a bag of Marcona almonds in my car, to fend off less-healthy temptations. 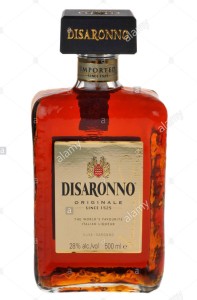 No discussion of almonds would be complete without a glass of amaretto.  In my junior year of college, studying abroad in Rome and not quite of drinking age, I was introduced to copious amounts of table wine, but also to Amaretto Disaronno, the elegant liquor from the northern part of Italy. The (supposed) origin of Disaronno is as colorful as the drink itself:

In 1525, a Saronno church commissioned artist Bernardino Luini, one of Leonardo da Vinci’s pupils, to paint its sanctuary with frescoes.  As the church was dedicated to the Virgin Mary, Luini needed to depict the Madonna, but was in need of a model.  He found his inspiration in a young widowed innkeeper, who became his model (and lover).  Out of gratitude and affection, the woman wished to give him a gift.  Her simple means did not permit much, so she steeped apricot kernels in brandy and presented the resulting concoction to a touched Luini. (from “A Brief History of Amaretto” – Shaw Media)

Apricots still play a role in the making of amaretto, but its distinctive flavor comes from bitter almonds (amaretto translates to “bitter”).  Yet it’s still syrupy sweet – too sweet for me to drink straight.  Like most I “sour” mine with a shot or two of lemon juice.

Now that I think about it, we have almonds everywhere in our house.  Almond milk in the refrigerator.  Almond flour in the pantry.  Almond extract in the spice drawer.  Almond butter for our protein shakes and slivered almonds for our salads.  Amaretto in the liquor cabinet.

Still not enough.  I need to go find me some more marzipan.