Last year, Starbucks surpassed Subway as America’s #2 restaurant, measured by gross sales (McDonald’s is still top dog).  I don’t consider Starbucks a place to “dine”, so second-place is impressive.  Then again, Starbucks’ bakery case has matured since its initial offerings.  There are temptations-a-plenty now, en route to the barista.  The traditional breakfast items share space with yogurt parfaits, fruit-and-cheese boxes, “fold-over” sandwiches, and entree-size salads.  But it’s the smaller offerings I want to talk about today.  Look closely through the glass – you’ll see sous vide egg bites and Bantam’s bite-sized bagels.  Those little guys could be the future of fast food.

I haven’t tried the mini bagels, but Starbucks wins me over with its egg bites.  The first time I gave them a whirl, my wife and I were in the middle of Lent, trying to find alternatives to the foods we gave up.  Egg bites to the rescue.  The sous vide prep means cooked in water, with nothing but a bit of spinach, red pepper, and cheese mixed in for flavor.  Simply elegant (elegantly simple?), and the light, fluffy texture makes them as delicious as they are convenient.

Now let’s talk about real breakfast foods.  Last weekend, my wife and I went to a nearby restaurant called Three Little Griddles.  Much to my delight, Griddles had Æbleskiver on the menu.  If you’re Danish, you already know what I’m talking about.  Æbleskiver is heaven-sent breakfast: puffy little balls of pancake with a sweet surprise in the middle, finished off with a delicate dusting of powdered sugar and a side of raspberry jam.  Æbleskiver is Danish for “apple slices”, but you’re more likely to bite into a strawberry or a fruit-compote filling instead.  Three Little Griddles also offers Æbleskiver with an egg/bacon filling, coated with a maple-syrup glaze and powdered sugar.  A complete breakfast!

If you haven’t heard of Æbleskiver and the first thing you thought of was “doughnut hole”, shame on you.  Doughnut holes don’t even qualify as poor man’s Æbleskiver.  Doughnut holes are a clever product designed to get you to buy more when it appears you’re buying less (think “fun-size” candy bars).  I have two issues with doughnut holes.  One, they’re not actually the “hole” of a solid doughnut, but prepared and baked separately instead.  Two, they’re not shaped like a doughnut hole should be (picture it – something more like the hub of a wheel).  They should be called doughnut balls.  But enough of this talk; I’m wasting words.  Let’s keep the focus on Æbleskiver. 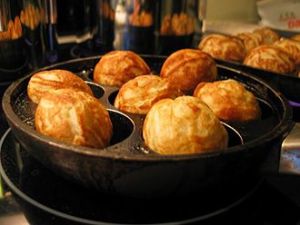 My first taste of Æbleskiver came when I was little, in the Central California village of Solvang.  Solvang is like, well, a kid’s “Little Denmark” – a town small enough to walk around, with an overabundance of shops selling toys, candy, and ice cream.  Several windmills spin slowly above Solvang’s high-pitched shingle rooftops.  A church sits prominently on the edge of town.  A small park serves as the town square, complete with a bandstand-sized gazebo.  All that’s missing is some water-filled canals and cobble-stoned streets.  But meanwhile, there’s plenty of Æbleskiver.  Some restaurants even bake them out on the sidewalk, rotating those little dream puffs to perfection in their unique iron skillets.

If you credit the Danes with the invention of ball-shaped food, the rest of the world takes a distant second with its imitations.  China makes a spherical egg-based fruit-filled waffle called Gai Daan Jai.  Japan makes a variety of savory ball-sized snacks called Takoyaki. (Savory? Yuck.)  And America makes doughnut holes called Munchkins.

As if Æbleskiver isn’t cool enough as a food, it’s also a cool word with a unique spelling (note the “letter” Æ).  Perhaps Starbucks will start carrying it, along with the egg bites.  I’d buy both and a coffee for a complete breakfast.

Finally, if Æbleskiver has you wondering what other delights Denmark has to offer, consider Æblekage.  Æblekage is “apple charlotte” – stewed sweetened apples layered with butter-roasted bread crumbs and crushed makroner (an almond-flavored meringue), topped with whipped cream and red currant jelly.  Oh my; sounds like dream stuff.