A Wall Street Journal headline stopped me in my tracks today.  In Guangzhou, China, you can now buy a car from a vending machine.  Starting with a smartphone app, you book a test drive before you arrive.  Once at the “dealership”, facial recognition software kicks the machine into gear, delivering your car-of-choice from an eight-story automated garage.  If you’re happy with the test drive, you negotiate the purchase through the app – no haggling salesperson to be seen – and off you drive with a new car.  I’d fly to China and take a test drive just to see the automated garage vend a car.  That’s some cool technology.

Vending is more sophisticated these days than the plain-Jane cigarette and candy machines of old, of course.  Airports dispense cell phones and other pricey electronics to travelers from vending machines.  Food-truck-like boxes dispense made-to-order pizzas.  A mall in Beverly Hills vends Beluga caviar from self-serve refrigerators ($500 a pop).  Las Vegas’s “The Lobster Zone” is like one of those machines where you joystick the claw to your toy of choice, only here you’re plucking live lobsters from a tank.  Finally, the cupcake company Sprinkles makes serious bank with its street-side “cupcake ATM’s”. 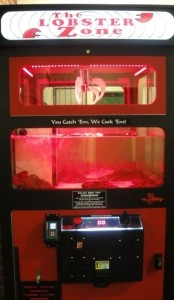 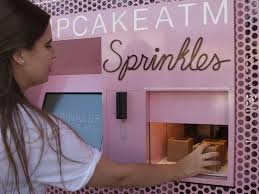 Speaking of bank, I used to collect mechanical banks when I was a kid. That sounds like a strange (nerdy?) admission – collecting toy banks – but that’s what kids did in the 1970’s. They collected things. Mechanical banks wouldn’t appeal to today’s youth for a couple of reasons. One, they’re battery-operated or “wind-up”, so you can’t control them with a phone or an app. Two, they work on the assumption you’re saving up nickels, dimes, and quarters for future purchases. Today’s kids seem less likely to save that way (if at all), and their purchases are with bills or electronic cash.  Mechanical banks prefer coins.

My collection of banks – which disappeared years ago – is a good example of the limitations of what and how a kid could purchase back then.  Almost all my banks came from the Johnson Smith Company, a manufacturer out of Chicago (“Since 1914!”)  Johnson Smith sold endless novelty and gag gift items: x-ray goggles, whoopee cushions, joy buzzers, and those really annoying “chattering teeth”.  They also sold mechanical banks; not the beautiful collector’s editions of old, but plastic, battery-operated cheapies, probably manufactured in China.  Johnson Smith was the closest thing a kid in my day had to Amazon.

Because I lived in Los Angeles and Johnson Smith sold their mechanical banks in Chicago, the U.S. Postal Service was a lifeline; the critical link between my quiet suburban neighborhood and the Midwest’s biggest city.  When I saved enough money, I’d stuff my bills and coins into an envelope, hand-address it, add several postage stamps (Mom helped with the calculation), and walk it out to the mailbox at the end of our driveway.  Four to six weeks later, a small brown box would arrive from Chicago, addressed to me and containing my latest mechanical wonder. 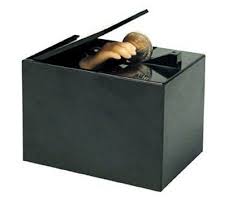 Think about that for a second.  Not only was I putting cash into a flimsy white envelope to be processed through the endless shipping and handling of USPS, but I was also leaving my hard-earned money out by the street, alerting the world to its presence with the little red mailbox flag.  That same transaction today – with “1-click ordering” – takes a single keystroke or voice command and shows up on my doorstep in two days or less.

The irony of collecting mechanical banks is that you’re spending your hard-earned pennies on the very thing designed to keep you from spending them.  Truth be told, my banks weren’t about saving money at all.  Instead, they were entertainment in the form of plastic-and-battery-operated mechanics, watching coins go here-and-there before finally disappearing from sight.

I never lost my fascination for mechanics.  I remember grade-school field trips to commercial bakeries, going behind-the-scenes to see how big vats of dough methodically evolved into sliced, packaged loaves of bread.  My kids and I used to watch the Food Network’s “Unwrapped”, a half-hour tour through the sophisticated mechanics behind a product’s evolution, from individual ingredients, through various stages of assembly (and several conveyor belts), finally to the finish line: a brightly-wrapped ready-to-eat consumable. 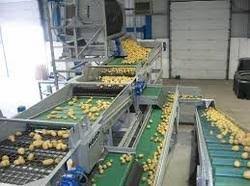 Mechanical banks may be long gone, but even in today’s age of electronics I say we’re still fascinated by mechanics itself.  It’s the reason we buy cars from vending machines or cupcakes from ATM’s.  And it’s the reason I still haul my pocket change down to the bank, just to see the teller dump the lot into the coin-counting machine; the noisy, mechanical wonder that sorts, counts, and spits out a receipt just before gobbling up every last penny. 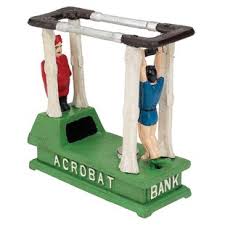