Today I’m perched at one of my favorite Colorado coffeehouses, sipping the local version of a cafe latte.  The air is rich with the bitter aroma from the nearby roaster.  I’m surrounded by chatty patrons, each with their own coffee-based delight-in-a-cup.  If I had a handful of the crunchy chocolate-covered espresso beans they sell, I could say coffee’s hitting all five of my senses today (instead, I have a delicious apple fritter).  These days, coffee is as infused into American culture as baseball and Apple (pie).  And how far we’ve come from the cups of Joe former generations would brew with store-bought cans of Folgers.

How far have we come (besides the requisite latte foam-art)?  Consider this: my coffeehouse does not allow to-go orders.  You read that right: if you get your coffee here you’re drinking in-house.  According to the resident “roastmaster”, paper cups alter the flavor of the coffee and thus they won’t sell it to-go.  Hard for me to swallow (the cup thing, not the coffee), as my palate has never been very discerning.  Yet here I am, paying top dollar to drink real-cup coffee “in the house”.

It wasn’t always this way.  Not so long ago all you had on the menu was a “cup of coffee”.  Take it black or take it with sugar/cream, but that’s where your options ended.  And the reference to “Joe”?  That comes from a 1914 ban of alcohol on U.S. Navy ships by then Secretary of the Navy Josephus “Joe” Daniels.  The strongest alternative to a “real” drink on-board was black coffee.

Today’s kids get their first taste of coffee at Starbucks.  My own first taste took place in Italy, during the college year I lived there in the 1980’s.  Italians take their coffee very seriously.  Walk into an Italiano café, belly up to the bar, and order an espresso shot and sweet roll.  That’s your standard-brand Italian breakfast, and you take it standing up.  You’re in, you’re out, and you’re on your way again in less than a minute, sufficiently caffeinated.  Not many are baptized on straight espresso, but that was my experience.

My coffee journey continued after college, but it was quite a stumble.  I graduated from Italian espresso and regressed to the standard-brand Bunn coffeemakers of corporate America.  Starbucks and its kin would not arrive for another 5-10 years.  Office coffee was a mindless, characterless, tasteless experience.  A Styrofoam cup of black nothingness, with a few unbrewed grounds thrown in for texture.  It was like descending from the Golden Age of the Roman Empire to the Dark Ages.

Thankfully, my coffee habits persisted until coffeehouses became an American staple in the late 1980’s.  The houses themselves still aren’t the vision of Starbucks’ Howard Schultz: “comfortable, social gathering places away from home and work”, but at least we’re getting past the Frappuccino-this and macchiato-that, evolving back to straight coffee. 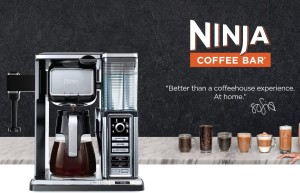 My one dedicated-cash phone app is for coffee.  I literally wake up and smell the coffee thanks to my Keurig; then structure my waking hours with the possibility of a drive-through cup of Joe later on.  To get really serious I could spend $200 on a Ninja’s home coffee bar, which claims to be a coffee system (“Variety of brew types and sizes!” “Built-in frother!” “Tons of delicious coffee recipes!)  Their tagline: “See what all the coffee buzz is about”.

Coffee buzz is no joke, as patrons of America’s 33,000 coffee shops will tell you.  The euphoria we desire – the blissful effects drawn from caffeine – actually has a name: “margaha”.  For that reason, whether your preference is a nitrogen-infused cold brew, a coconut-milk mocha Macchiato, or a take-it-straight cup of Joe, it’s safe to say coffee is here to stay.

3 thoughts on “The Euphoria of Joe”

The blog of author Betsy Kerekes