Jake Olson is a student at the University of Southern California. He’s a backup long snapper for the celebrated Trojan football team, and aspires to play golf on the PGA Tour after college. John Bramblitt is a budding artist whose work sells in more than twenty countries. He paints primarily by touch, claiming “different colors have different textures”. Christine Ha is an award-winning chef who never had a minute of formal training, yet developed a popular cooking blog and won the 2012 edition of the television show MasterChef.  Why mention these three achievers in the same paragraph?

They are all legally blind. 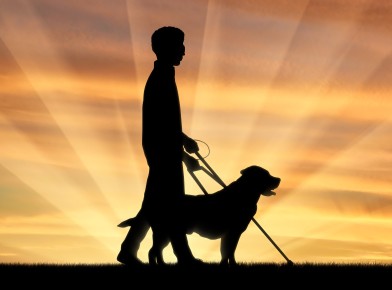 Two weeks ago – unbeknownst to just about all of America – we “celebrated” White Cane Safety Day (WCSD).  A national observance since 1963, WCSD was established by the National Federation of the Blind to remind the public about the significance of the white cane.  In 1930, blind people were given the freedom to lawfully move about the U.S. on their own, provided they used the white cane to navigate their way.  The implication is prior to 1930, blind people were either confined to their homes or could not move about without the assistance of another person.  My parents explained the meaning of the white cane the first time I saw a blind person on the street, but it never occurred to me the cane signifies a legal status. 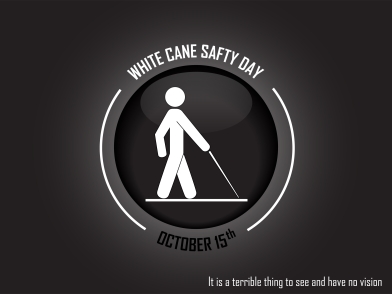 Seeing may be believing (as the saying goes), but blindness takes belief to an entirely different level.  The people I mentioned above are just a few of the countless examples of accomplishments in all walks of life, minus the sense of sight.  Surely you can name a blind person without resorting to Google. Ray Charles. Helen Keller. Andrea Bocelli. Stevie Wonder. Aldous Huxley.  And those are just the famous ones.

Speaking of the famous, I recall – somewhere in the piles of books I read as a teenager – the fictionalized biography of Louis Braille.  Just as Irving Stone did for Michelangelo in “The Agony and the Ecstasy”, the author added fiction to fact to bring the story of the famous French educator/inventor to life.  Braille’s blindness occurred in his youth: the infamous accident with the awl in his father’s workshop (surely inspiring the plea of parents, “Don’t play with that!  You’ll put your eye out!”)  Remarkably, at only fifteen years of age and already blind, Braille took the very same awl and developed a method of reading/writing for his counterparts virtually unchanged to this day.  It reminds me of Beethoven, who lost his hearing in his early twenties yet somehow composed some of the world’s most famous symphonies and piano concertos.  Belief at an entirely different level.

Convenient to my topic, a new movie debuts in theaters this week called “All I See Is You”.  Starring Blake Lively and Jason Clarke, the story concerns a marriage where a blind spouse depends on her partner to see and feel the world around her.  Dependent, that is, until a corneal transplant allows the woman to regain her sight.  As you might expect, bringing vision to the blind is not all it’s touted to be.  A similar story was told in 1999’s “At First Sight” with Val Kilmer and Mira Sorvino.

Christopher Downey is an architect who, shortly after training in the profession, lost his eyesight to a tumor wrapped around his optic nerve.  No problem, apparently.  Downey now produces drawings from a tactile printer – raised lines akin to Braille’s raised lettering system.  As if you needed another example of belief.

I used to yearn for “as far as the eye can see”, considering the eye doctor routinely issues me a prescription far less than 20/20.  Thanks to these inspirational people however, it’s fair to say my vision is actually limited by my sight.