I unfurled my American flag off the back deck of our house yesterday. It’s a prominent location for the Stars & Stripes, where people passing by on the adjacent street can’t miss it. Then again, we live in a quiet neighborhood so I’d be surprised if many took notice. I’d be even more surprised if they knew why I was flying the flag.  Perhaps you missed it too.  Yesterday was Flag Day. 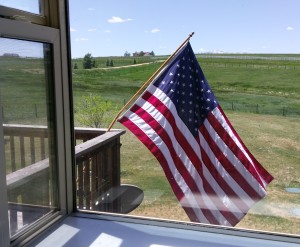 To be brutally honest, I’m not sure why America has a Flag Day.  Oh sure, the history books tell us Flag Day commemorates the adoption of the U.S. flag, way back on June 14, 1777.  One could argue there’s no amount of honor and celebration large enough for our country’s heritage and freedom.  But Independence Day gets a whole lot more attention than Flag Day.  Ditto Memorial Day and Veterans Day.  At least those days are true “holidays” in the United States.

Flag Day was established in 1916, so what-do-ya-know that makes this year’s celebration the 100th anniversary.  I didn’t see any parades or fireworks to commemorate the centennial, did you?  Then again, I don’t think America fully embraces Flag Day.  If we adopted our flag in 1777, why did we need another 140 years to give it a “day”?  Flag Day isn’t even an official holiday in this country.  The President has the discretion to decide if it should be celebrated in a given year.  On that note, I don’t recall a proclamation from President Trump so maybe I should’ve kept my flag in the closet.

There’s further confusion about Flag Day.  Congress didn’t put the commemoration into “law” until 1949, thirty-three years after Woodrow Wilson established the day.  No states acknowledged Flag Day before 1937, when Pennsylvania became the first.  Other states – notably New York – decided it made better sense to put Flag Day on a weekend, as in the second weekend in June.  We can’t even agree on the date.

There’s history about Flag Day that precedes President Wilson, but it’s spotty.  The earliest reference is 1861, when a citizen of Hartford, CT suggested the idea and the city put together a celebration.  That didn’t take.  I885, Bernard Cigrand of Waubeka, WI began a prolonged push for a U.S. Flag Day.  After one local observance, he traveled around the country “promoting patriotism, respect for the flag, and the need for the annual observance”.  Thanks to Cigrand, Wilson established Flag Day thirty years later.  Cigrand is thus earned the title, “Father of Flag Day”.

Despite the facts, Flag Day still has me scratching my head.  The “National Flag Day Foundation” celebrates – like New York – on the second Sunday in June, yet the Star-Spangled Banner Flag House in Baltimore and the Betsy Ross House in Philadelphia prefer June 14th (lending credence to “National Flag Week”).  Parades and festivities take place around the country, but the discretion seems to be with the states as much as the President.  Here in Colorado Springs, home of the Air Force Academy and several other military bases, Flag Day came and went without so much as a whisper.

Fifty other countries have a Flag Day so there is some legitimacy to the concept.  But in many cases, those countries celebrate their independence as well.  That makes a lot more sense to me.  The flag is a connotation for liberty, so why not go with one holiday instead of two? 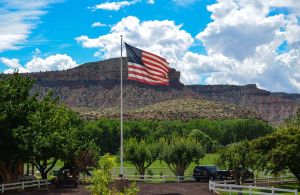 I admire the homes with the permanent flagpoles in the front yard, their owners pridefully raising the Stars & Stripes day in and day out.  But Flag Day must be “just another day” to these people.  Fittingly, americanflags.com describes Flag Day as “consistently overlooked yet universally beloved”.  I’d agree with the first part of that statement.

With all due respect, I’ll continue to unfurl the Stars & Stripes on Flag Day, no matter how many people notice.  If for no other reason, to echo the words of one of our most revered presidents: 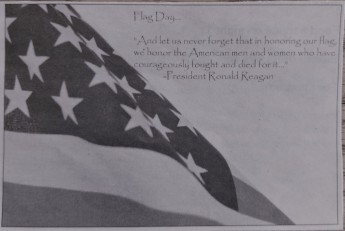