Lately it seems the American flag is more often at half-staff than not. When the flag is at full-staff I get lost in the surrounding scenery, with just a passing glance at the Stars & Stripes. But at half-staff the flag is an effigy of its prouder self.  It might as well be illuminated with several of those Hollywood-style searchlights, as if to say, “something’s wrong with this picture.” 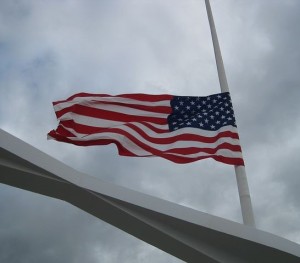 There is something wrong with this picture: I don’t immediately know the reason the flag goes to half-staff. There’s no accompanying billboard to tell me who or what we’re commemorating with this gesture. In fact, it wasn’t until I wrote this piece that I navigated to halfstaff.org (of course there’s a website), where you can learn why and when the red, white, and blue becomes more than just the unfurled symbol of America’s freedom.

Let’s get two misconceptions out of the way. One, the flag is not considered “half-mast” but rather “half-staff”. If the flag is “half-mast” you’re probably rocking and rolling on a ship at sea instead of standing on dry land (but the significance remains the same – respect, mourning, distress, or a salute).  Two, the flag is not “raised to half-staff”.  First it is raised to full-staff, paused, and then lowered to half-staff for the rest of the day. But unless you’re there at sunrise you’ll probably miss that little detail.

“Half-staff” dates to the century before America’s founding fathers.  Today the President issues the request through executive order, and all government facilities (including schools and military bases) are expected to comply.  Typically, we’re commemorating the death of a prominent government official, whether on the day of passing or the day of remembrance.  And speaking of passing, the gesture of lowering the flag is said to make room for an “invisible flag of death” flying above.  I kind of like that. 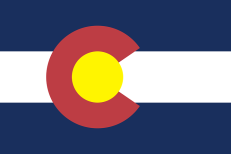 As if to play copycat, state, city, and other flags and pennants are expected to follow suit whenever the American flag goes half-mast.  But state flags can go half-mast by their own right.  Here in Colorado our state flag has been lowered more than twenty times in the past five years.  Just yesterday our governor ordered half-mast, to honor the passing of Ray Kogovsek, a former Colorado lawmaker and U.S. Congressman.

The American flag is also flown at half-mast to acknowledge days or events in U.S. history.  Thus, you can expect the raise-then-lower on Memorial Day, Pearl Harbor Remembrance Day (12/7), and what is now called Patriot Day (9/11).  Also since 2001, the flag is flown at half-mast in conjunction with the annual National Fallen Firefighters Memorial Service.

Several similar gestures to half-staff – especially since the advent of social media – have emerged to enlighten us to those who suffer.  Think about all those “Awareness Ribbons” (or bracelets), displayed on clothing and cars.  Their meaning is linked to their color, as in the following examples: Blue – Drunk-driving intolerance; Pink – Breast Cancer awareness; Rainbow – Gay Pride and support of the LGBT community; White – Victims of terrorism or violence against women; Yellow – Support of U.S. troops (among a dozen other designations), but generally a symbol of hope.

Recently I’ve noticed houses in our neighborhoods with a single green light brightly illuminated next to the front door at night.  As I discovered here, I’m seeing the “Greenlight A Vet” program, meant to “show America’s veterans the appreciation they deserve when, back home and out of uniform, they’re more camouflaged than ever.”  You can even purchase and/or register your green light on the website as a show of solidarity.  9.3 million people have done just that.  Four are right here in my zip code.

The green lights do catch my attention.  As a civilian I don’t think our veterans get nearly the appreciation or respect they deserve, so “bravo” to the program.  But the American flag doesn’t get the appreciation or respect it deserves either (a topic for another post).  Thankfully, it’s hard to ignore the right-but-somehow-wrong image of the Stars and Stripes at “half-staff”.

One thought on “Down Goes The Flag”