On the treadmill this week, surrounded by dozens of others tackling their workouts, an idea formed in my head. Whether it’s running, sprinting, or even dancing on the treadmill (the new trend these days), there’s a subconscious sense of competition with those around you.  Someone wants to leave the room believing they “won” their workout.

Flash back to state fair or neighborhood carnival memories for a second. Those light-bright terror-filled rides drew me in as a kid, but how about the midway games?  That’s where I dropped some serious cash. Ring toss. Shooting galleries. Fishing pond. Skee ball.

In my book, the most memorable of the midway games was the Roll-A-Ball horse race. A larger-than-average booth with a dozen open stools invited you to have a seat. Along the back was a massive tote-board with horses lined up top to bottom. You had a brief sense of mounting a thoroughbred and trotting into the starting gate. The game began (with an obnoxious bell), and each “jockey” rolled a ball up a small wooden board and into holes.  The further away the hole the faster your horse galloped across the board.  The closer the hole the less the gallop but also the quicker the ball came back to you.  First horse across the finish line won (another obnoxious bell).  Some versions of the game had you shoot targets with water guns instead of Roll-A-Ball.

Here’s a video of the Roll-A-Ball horse race in action.

There’s a ton of frantic energy with Roll-A-Ball.  You play while nervously glancing at the tote-board to see how your horse is coming along. Whenever someone hits a high-score hole their horse surges to the lead. Towards the end you’re aiming for the further holes in a desperate attempt to make up furlongs.  As if the distraction of carnival sounds isn’t enough, thundering hoof beats blare every time a horse makes a move.

With Roll-A-Ball in mind, let’s go back to the gym.  I propose we combine the horse-race concept with the treadmill workout.  Place a big tote board at the front of the room. Assign each treadmill to a runner on the board.  Then create several competitions as everyone works out simultaneously. Who has been running the longest? Who is running the fastest? Who is covering the most distance?  The runners advance across the tote-board according to the individual efforts on the treadmills.  Tote-board results change constantly as runners join or leave the game.

Would people “play”?  You bet they would.  Runners are competitive by nature as they vie to “medal” or win their age category or even just improve their “personal best”.  Runners are entering 5K’s and 10K’s, half-marathons and marathons in record numbers.

Me?  I run because it makes me feel good.  But don’t think I don’t notice the results of my workout spelled out in big, bold numbers on the treadmill display. Total Time. Total Miles. Average Speed. Calories Burned.  Sometimes I race against my former self.  Sometimes I increase my pace to match the faster runner three treadmills over. Sometimes I run longer to outlast the creeper who chose the treadmill right next to me when several others were open.

Competition leads to better workouts so the racing element is a slam-dunk.  Add a “join” option to the treadmill display and you instantly pop up on the tote-board.  Quit whenever your workout is done.  Even if you don’t “win” I’d bet dollars to doughnuts you’d get a better workout than if you were running in isolation. 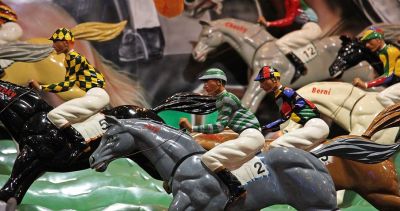 Mark my words, someone more innovative than me will take this idea and “run with it”.  Gyms will cough up the purchase price because racing games would attract more memberships.  And maybe, just for a moment, runners will feel like they’ve stepped off the treadmill and back into the carnival of their childhood.

3 thoughts on “Running for Roses”