In the local news this week, we learned Amy Wilson and her newborn – residents of our fair city – are in critical condition in a Salt Lake City hospital as victims of a head-on collision. Wilson and her newborn suffer brain injuries as they struggle to survive, while two of three teenagers from the at-fault car are dead. The heartbreaking interview with Wilson’s husband here in Colorado included loss of words as he tried to reconcile the happiness of a birth with the tragedy of the accident.

My reaction to this story – besides donating to the “Amy and Baby Wilson Support” GoFundMe campaign – was the teenagers must have been texting at the wheel.  I wonder if they even left skid marks.  Prayers be with them, Amy Wilson and her newborn will survive and their injuries will be short-lived.  But the same cannot be said for the kids in the other car.  As it turns out they were street-racing when they jumped the median.  They might as well have been texting.

The victims on both sides of this accident will join the rising morbid statistics tied to “distracted driving”, which includes use of smartphones. We just can’t put them down, even with risk of life staring us in the face.  By no coincidence, the Wall Street Journal published an article this week about rising insurance rates tied to use of smartphones while driving.  36% of State Farm customers admitted to texting while driving, up 5% from five years earlier.  20% admitted to taking a photo while driving; another 10% take videos.  In those same five years smartphone ownership among drivers increased from 50% to 90%.

I will never understand the urgency to check a text while driving.   Apparently I’m not as addicted as most.  If I’m “late” in responding to a message, I can’t think of a better excuse than “I was behind the wheel”. When my phone rings or a text message dings, I will find a safe place to pull over if I can.  More often I’m not going to answer until I get where I’m going. 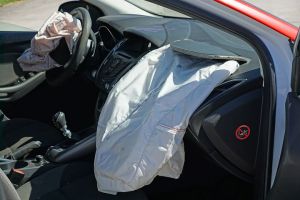 Perhaps I’m more motivated than most, because my son caused a distracted driving accident several years ago in high school.  As he fiddled with the car stereo leaving campus, he braked too late when he saw the red light in front of him, causing a chain-reaction fender-bender involving five cars.  Thankfully no one was hurt, but even at school-zone speeds my son caused a lot of damage.  Because of that incident I chastise my children any time I receive a text from them and realize they are driving.

Technology is trying to improve things, of course.  Voice-activated control is a lot better than it was just a few years ago.  But we’re not there yet.  Until it is commonplace to conduct a stream of communication from start to finish hands-free, the senseless accidents – and the insurance rates – will continue to rise.  Even if you perfect the technology, you still have the distraction.

Sure, you can walk and chew gum at the same time, but not so texting and driving.  I looked at the photo above and thought, “what if you saw that through the windshield of the car coming towards you?”

The next time you’re on the road and you get that familiar ding, just keep going where you’re going.  No matter the message, it’s infinitely less important than the safety of those around you.

2 thoughts on “You Can’t Walk and Chew Gum”