Mary Tyler Moore passed away over a week ago and I’ve been thinking about her ever since.  Countless actresses come and go, but then you have those who make indelible impressions with one or two jaw-dropping performances.  Audrey Hepburn, Julie Andrews and Maureen O’Hara, just to name a few.  Meryl Streep.  And Mary Tyler Moore.

There’s something about Mary. I read her filmography from start to finish – a span of sixty years of television and movies – and came up with two roles of any significance to me: Mary Richards in The Mary Tyler Moore Show (1970-1977), and Beth in the film Ordinary People (1980).  But I think most people would agree – those performances alone land Mary Tyler Moore in an acting class by herself.

Moore first became a familiar name as Laura Petrie in The Dick Van Dyke Show in the 1960’s, but that was a little before my time.  On the other hand, The Mary Tyler Moore Show was a weekend staple in my house.  At an age when my father still controlled the TV remote (er, TV channel – no remotes back then), my brothers and I were treated to CBS’s Saturday night “killer lineup”, which included The Mary Tyler Moore Show, The Bob Newhart Show, and The Carol Burnett Show.

The Mary Tyler Moore Show included memorable opening credits, if only because the theme song was so infectious (“…you’re gonna make it after all…”), as was the final scene where Mary spins and smiles and throws her hat into the air at a busy Minneapolis intersection.  That throw – and Mary Tyler Moore herself – is immortalized in a bronze sculpture you can find at that very same intersection today. 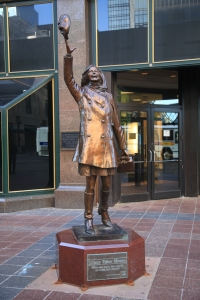 In 1980, just as I was heading off to college, Robert Redford directed the Best Picture winner Ordinary People, one of the most gut-wrenching, powerful, “real-life” dramas I have ever seen.  Timothy Hutton burst onto the Hollywood scene with an Oscar-winning performance as Conrad, the younger of two sons in a tormented Chicago family.  Judd Hirsch was also nominated for an Oscar (losing to Hutton) for his portrayal of the determined therapist who counseled Conrad back to stability.  But it was Mary Tyler Moore’s turn as the heartless and unforgiving mother Beth that stole the show.  Her performance was so counter to the sunny demeanor of Mary Richards, I wondered if she was tapping the energy of some real-life bout of depression.  That was the breadth of Mary Tyler Moore’s acting talents.  I’ve only seen Ordinary People a couple of times but the scene where Donald Sutherland tells Beth he no longer loves her still haunts me.  Moore’s silent, crestfallen reaction to that statement could’ve coined the phrase “verbal slap in the face”.

I am even more taken by Mary Tyler Moore when I read some of the details of her life.  Clearly, she tried to embody the positive demeanor and “independent woman” of Mary Richards, but she did so in the face of significant personal tragedy.  She dealt with alcoholism and smoking addiction, drug overdose (her sister), suicide (her son), and years of diabetes.   She took up the baton to promote diabetes awareness and animal rights.  Moore was even tougher and more outspoken than her little/big screen roles would suggest. 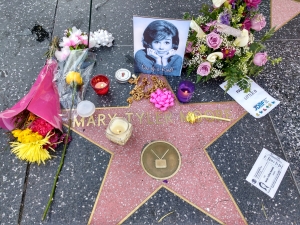 The theme song of The Mary Tyler Moore show begins with “Who can turn the world on with her smile?” Scroll back up to that first photo.  Talk about ear-to-ear!  And I can’t help but smile back, even as we now say goodbye to Mary.